Trending Now
A “widow’s” lamentation and lessons for RCCG, others...
God’s word: A case for non-English speakers in...
Adeboye: Some women consider it privilege to sleep...
Despite challenges, God has been good to Nigerians...
Writers save lives, solve problems says Omotosho @...
Prince Harry’s book that hit 1.2m sales in...
Ex-Apola king, Idowu Animasawun celebrates 85th birthday with missions...
Nigeria can’t make progress if the Church is...
Peter Obi: I have not promised I will...
2023 elections and the imperative of divine timing
Home Features How God turned my disability to a blessing-Gbadamosi, Nigeria’s foremost blind footballer 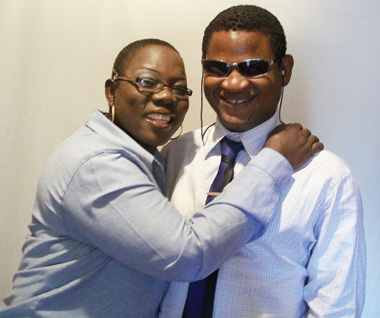 How God turned my disability to a blessing-Gbadamosi, Nigeria’s foremost blind footballer

Yinka Gbadamosi is Nigeria’s foremost blind footballer. Though he is visually impaired, he plays football and even oversees a football academy where the blind come together to play. Last July he clocked 40. In this interview with Church Times Nigeria, he shares his experience.  Below are excerpts:

How do you feel about attaining the age of 40?

Yinka Gbadamosi and wife how

To me, it is a landmark and a honour to God. To even think that one can live above the challenges in life and still be able to celebrate is a great privilege and an opportunity to thank God.

If I mention the challenges it will be so much. And I would not like to go into that for now. But I can say we have challenges in all areas of life. It is the grace of God that has been supporting me. And for the fact that one even runs a ministry that takes care of the less privileged makes it more challenging. But God has been helping us in all areas of our lives. That is the much I can say

But what are the challenges you find difficult to forget?

There was one we had when we were making moves on the Blind football project. Some money was voted to the organization and somebody came up to help us but he embezzled the whole money so I had to get him arrested. It was a trying time for us in the academy. The person that duped us was not blind. So it was obvious he took advantage of us.

I see that you walk around a lot unaided. You even go to far distances. How do you cope walking alone without a guide

It is part of the training. I was trained to be independent. I lived with that. There is no secret about it. Trust in God and allow him to lead.

Were you born blind?

I was not born blind. I became blind through an attack when I was a baby. My parents told me the story. But the beauty of it all is that God has turned the situation around for my good.

Where lies your strength?

My strength is in God. I strongly believe if you set your heart in doing something you will achieve it.

How did you come about Blind football?

When I was a child I used to play football even as a blind boy. We used some kind of pebble to pad the ball and it produces some sound which we follow. That was then but now the balls are packed with jingle technology and it is better. I started the academy because of my love for football and it has been quite exciting.

What kind of support are you getting?

We have had support from Maxi Ohunabuwa, Prof Tunde ColeOnitiri and Itua Igholdalo and of course Gov Fashola.

Let’s talk about your marriage. How has it been?

You changed your name from Mutiu to Yinka. Is it because of your conversion to Christianity from Islam?

I was a Muslim before my conversion to Christianity. But I did not change my name because of that. I did because of an understanding that I needed a name that I can relate with which is meaningful to me. I’m a Nigerian and I come from a Yoruba culture and I think it is better for me to bear what I understand that is why I dropped Mutiu for Olayinka.

How did your conversion take place?

I gave my life to Christ in 1993. It was God who actually took me out of darkness to light. I’m very erratic in nature. You cannot easily convince me to accept an idealogy. I’m very critical.  But God had his way. I was going to Surulere from Victoria Island and I had the option of going to a party and also going to one of my mentors. As I just dropped at Alaka bus stop along Surulere I heard a voice just say to me, turn left and left happened to be my mentor’s house and I remember that time very well, it was the 21st of July 1993. I remember the whole issue at that time was June 12 problem and there were prayers for the country. But in that gathering, the person leading the prayers said there was a need for people to surrender their lives to Christ which I did. That was when I made a conscious decision to follow after Christ.

So what are your plans for the future?

We are trusting God for more progress. The Football Academy will be running in a new dimension. We will be more focused and organized in the coming years as God gives us grace.

Why I married him- wife Funmi Gbadamosi, wife of Yinka Gbadamosi also shares her experience in this encounter

For how long have you been married?

But how did you get to meet him and how did he propose to you?

You know he is an evangelist. We met on the field when he was doing God’s work. I may not be able to go into the details. But I did not have a problem saying yes to him. We married in the Latter Rain Assembly before we left for Trinity House. Itua Ighodalo the pastor of Trinity House is my husband’s mentor.

You talk about challenges earlier. Specifically, what are the challenges?

What is that thing in him that made you fall in love with him?

By the time you said yes to him, what was the reaction of your parents?

Initially, they were not supportive. But later they got to know and accepted him. Ordinarily, no parent would want his child to marry a sightless person; especially when the person is not from a wealthy home like my husband. My father is late but before he died he and my husband were quite close. It was tough in the beginning but my family learnt to cope as we progressed in the marriage.

What are the striking qualities in him?

He is full of potentials and he is quite talented. He is a very intelligent person and also loving.

There are times he goes out alone without anybody aiding him. Don’t you fear that anything could happen to him when he goes out like that?

Initially, when we got married I used to be afraid. But now I don’t have that fear because God has given me the understanding that there is an angel that guides him in all directions. God orders his steps. The Bible says the steps of the righteous are ordered by God.

How I lived with a deceptive husband for 12 years

How I lived with a deceptive husband for 12 years II

Call me oh. You know am original the YINKA, every other YINKA is a counterfeit?