Trending Now
A “widow’s” lamentation and lessons for RCCG, others...
God’s word: A case for non-English speakers in...
Adeboye: Some women consider it privilege to sleep...
Despite challenges, God has been good to Nigerians...
Writers save lives, solve problems says Omotosho @...
Prince Harry’s book that hit 1.2m sales in...
Ex-Apola king, Idowu Animasawun celebrates 85th birthday with missions...
Nigeria can’t make progress if the Church is...
Peter Obi: I have not promised I will...
2023 elections and the imperative of divine timing
Home News Why Big churches can’t champion the change we need in Nigeria-Prof Dapo Asaju 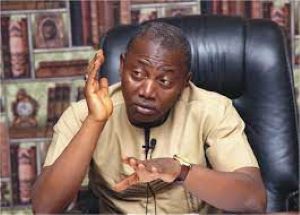 Bishop Theologian, Professor Dapo Asaju has said it would be difficult for the mega-churches in Nigeria to champion the needed change in the country because many of them are set in their own ways and personal empire-building.

Asaju made the observation at the 2021 mega summit of Kingdom Men Global Network in Lagos on Thursday, November 18.

The university don and one-time Vice-Chancellor of Ajayi Crowther University said from his experience in recent times, many church leaders are not ready to fight for the common good.

Rather, he said, “they are only interested in their own ministry.”

We don’t need a crowd to effect change

Asaju said, “When you are looking for a change in society, forget the established churches. This house is not united. I spoke the mind of God at the book launch of Pastor Williams Kumuyi and encouraged him to liaise with other pastors so that the church can have a common voice and address the challenges facing Nigeria. But he felt from his responses that churches should face spiritual things while those in government should pursue secular things.”

While noting that the suggestion seems not to be at home with the leaders he said, “We don’t need a crowd to cause a change. The people who came to evangelize in Nigeria were not the organized church. They were laymen who had a burden for the lost. It is time we look away from the big churches. We are supposed to be one chasing 1000.”

Asaju noted that there is a deficit of leadership globally adding however that it would come to a time when the problems of Nigeria would be solved,

“Things are going to normalize. The money that is bringing the corrupt people together will separate them. Right now, the North is feeling the bite. Nobody is safe. The emirs are not safe. People are not safe. It used to be the church but both mosque and church are now being attacked”

According to him, Nigeria is dead. “We are only talking because there is a possibility of resurrection after death. The terrible statistics are coming from the north.

“They are now the ones complaining. The problem is affecting all. They are seeing the slaughtering of people. We can now find people across the bridge who now understand that what we are facing is a Nigerian issue.”

On way forward for the country, Asaju said there is a need for the church to explore the missing dimension of prophetic auction.

“I am not talking about charlatans in the church who have personal agenda. I am talking about prophets in the land who can raise their prophetic voices. We need a voice that can give direction  and who can authentic people who want to go into politics.”

While noting that Nigeria is very easy to govern, he said, “We need a leader who will show us an example. Whoever shows up with a pedigree should be followed and encouraged. Right now there are no leaders in the land. But the church as a body has a responsibility to raise men of integrity that can lead the nation right.”

Asaju said, “We need massive enlightenment of the people. The church needs a platform where its voice can be articulated and disseminated to the people.”

Asaju on Christians in politics

He noted that many Christians in elective positions in the country are not committed to the church because they were not sent there by the church.

He suggested further that the church should train people and support them to go into politics. “Nigerians have lost hope. But God can raise a messiah. We must build the people and do everything possible to stop electoral fraud. We should also be willing to sponsor candidates that have the capacity to lead.

“Somebody can be ignited that will ignite others. There is nothing wrong if pastors go into politics if they are so convinced that God is calling them to it. Martin Luther was a Southern Baptist minister. Yet, he led a revolution that has transformed the face of the US till date.”