Trending Now
A “widow’s” lamentation and lessons for RCCG, others...
God’s word: A case for non-English speakers in...
Adeboye: Some women consider it privilege to sleep...
Despite challenges, God has been good to Nigerians...
Writers save lives, solve problems says Omotosho @...
Prince Harry’s book that hit 1.2m sales in...
Ex-Apola king, Idowu Animasawun celebrates 85th birthday with missions...
Nigeria can’t make progress if the Church is...
Peter Obi: I have not promised I will...
2023 elections and the imperative of divine timing
Home News You may be anointed till death and still go to hell-Nigerian-UK based Apostle tells pastors 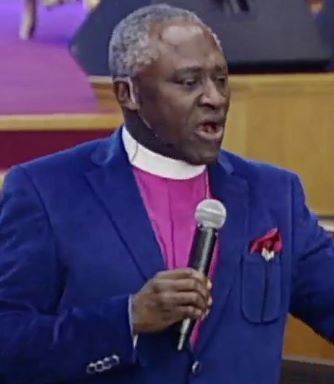 General Overseer of United Kingdom-based Christ Faith Tabernacle Apostle Alfred Williams has warned pastors not to be deluded by the  show of power that trail their ministry noting that it is possible to be anointed till death and still go to hell.

Williams made the submission during a one-day retreat for church leaders in his network at the Ogba, Lagos branch of his church on Monday March 21.

The apostle among other things also warned church leaders against using their pulpit to raise money unduly.

Why people go to hell

He said, “Death is a blessing to those who are faithful. But for those who are not, it is their end. After death there is no mercy. God will give a believer to the devil when he sins willfully and habitually . A sin practitioner is of the devil. Anointing will remain on you but you will not make heaven.”

He noted that many church leaders have given themselves to immorality and don’t seem to bother thinking that they would escape the wrath of God. “I can tell you they will not,” He warned.

Quoting 2Cor 5v10 and Rev 21v7-8, Williams said, “the word of God is clear about those who make a practice of sin will face the judgement of God. We are all going to stand before Christ to be judged for what we do with the earthly body.

“The  book of Revelation 21v7-8 also tells us the kind of people that will end up in hell. The corrupt, murderers, the immoral, those who practice witchcraft, idolaters and all liars shall have their part in the fiery lake of burning sulfur . That is the second death.”

He lamented that many church leaders have derailed from their original call warning that the judgment of God is imminent.

Williams cited the case of an atheist who became born again because he wanted to disprove the name of Jesus. But the name worked.

“He shared the testimony that he did not believe in the name Jesus. But he discovered that he was using it to pray for the sick and it was working. So he decided to surrender to him. That you are doing great wonders does not mean you are in tune with God.”

Williams also spoke extensively on the attitude of church leaders to money. He said it is an abuse of the pulpit to use it to raise money unduly. “Church is a place to teach people God’s word not to a place to raise money.” he said.

“But in actual fact, you may be getting less because rather than put a higher note at once they will change it to lower denominations and give severally. You are being deluded.”

He said he was so marveled the first time he saw churches collect offering more than once in service.

Feed a sheep and it will produce

“What pastors don’t realise is that they don’t need to force anybody to give. When a wretched man comes to your church and God now blesses him after some time he will give without being forced because he has experienced God in your church and his life has changed.”

While sharing the testimony of how God has blessed his UK church, he said,  “The sheep is not forced to give birth. A sheep that is well fed will produce its kind. Your responsibility as a pastor is to teach people God’s word. When they are blessed with the word they will, in turn, be a blessing.”

He said “the church in Nigeria has been brainwashed to think that if you are really serving God you must have money. We have misunderstood God’s position on money. Elijah did not have money. But Elisha had because he was a big-time farmer. Peter had money but people like Thomas had no money. So money is never a yardstick to measure your relationship with God.”

Many churches are following Satan

The present church in Nigeria according to him can’t effect the needed change in the country unless they repent.

Williams believes some of the largest churches in Nigeria are not following Jesus because of their attitude to material things.

“Many churches are following Satan. When God becomes father give me, give me in a church, it is of Satan. God wants people who will serve him. Unfortunately, the priority of most believers is to be blessed by God. Such believers are worshiping mammon.”

The UK-based preacher also took a swipe at pastors who place undue emphasis on generational curses. “God did not say pray over a curse. Those breaking curses are wasting their time. If you fear what God says you should not fear you are godless. We don’t pray over curses.  It does not exist under my roof. And I can’t be provoked to curse you. If I revoke a curse that somebody places on me, it’s because I attach importance to the curse.” he said.

He warned pastors to stop intimidating people who should be set free. “Generational curses does not exist. Let’s serve God the Bible way and we will see the Bible result. We have painted Satan what God did not paint him.”

He said the believer does not need to bother himself about anybody who curses him as long as he does not have the property of the devil with him. “God himself says he will curse those who curse you. You are not the one to do the curse. God is the one who fights for us.

“The curse that has no cause to stay on you can’t stand. Satan can’t work in a Christian except the Christian is living in disobedience. Paying attention to curses is an undue distraction. Satan does not want us to specialise more on God so as to distract us.”

On Nigeria, he said “put a righteous man in Aso Rock the day he is sworn in he becomes unrighteous. The devil has been behind the winding down of Nigeria. Everybody in Nigeria is confused.”

He said the salvation of the country is in the hands of the church. “We can do something to restore Nigeria to its past glory. For instance, it is the church that should be dictating the kind of fashion that the world should wear not the other way round.”

NIGERIA WILL BE GREAT AGAIN

Williams however said God showed him a vision that the time of peace is fast approaching in Nigeria but that the next president would only help prepare the ground for it.

“I saw a vision of a Nigeria that is great and peaceful and many nations of the world are struggling to come to Nigeria. But the next president is not the person that will bring about the needed change. God is going to raise somebody after the tenure of the next president.”

Apostle Williams challenged the pastors to prepare their congregation for the changes in society “Four things pose as challenges in the modern world. The government, economic atmosphere, social atmosphere, and technology. Those are the things that can affect church attendance and also impact on the lives of the people.” he said.

On the Russian war in Ukraine, he said, “The time we are living is the end time. The war in Ukraine can reach Nigeria. Only one step Satan will take, the whole world will be involved in that war. Nigeria has taken its stand against Russia we are a target if it turns to a third world war.”