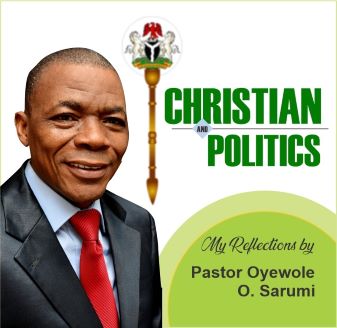 Once upon a time in Nigeria, things were rosy. There was no fuel scarcity, insecurity, currency devaluation. That was about six decades ago or thereabout.

But over time, we hear people who were around during the good times lament how poorly things have degenerated.

A growing faction of young people believe elders who give this painful reminder of “what might have been” should be challenged and asked where they were when “things were falling apart” and the centre could not hold.

Several 21st Century nation-builders have also preached the gospel of collective responsibility. They believe that is an antidote to the commonplace entitlement mentality which many believe is one of the causes of unrest in the country.

Many books have been published. Several public lectures have been delivered. And there has been a lot of blame game on the subject of “who did what?” and “why are we here?”

As a result of the foregoing, it will make little sense to add very long epistles to the bandwagon of the many materials and resources’ already dwelling on what was and what should have been. Regardless, if we intend to make real progress in our journey to the Nigeria of our dreams, we need to understand where we are coming from.

By no means are Nigerians lazy people. Statistics as of 2016 say that 4 out of every 10 Nigerian women are entrepreneurs. That is the largest of such across any people in the world. It is therefore shocking to see that despite the diligent hands of the populace, the majority are finding it even harder to make wealth these days.

Where did it all go wrong?

The major occupation in Nigeria in the pre-independence years was agriculture. It was practiced in various forms – farming, fishing, and hunting.

Regardless of age and gender, every able-bodied person maintained pride in tilling the ground to meet their household needs and selling for extra income.

Gradually, surreal revenues from the black gold overturned the pride of farming. It became a disgrace to be labeled a tiller of the ground and a tender of flocks – a profession Abel did with integrity. Rural-urban migration stepped up a gear. Everyone wanted a feel of the city life.

In simple words, the honest gains from farming were effectively submerged in some shady deals of crude oil. In a matter of years, we lost our cocoa and palm oil dynasty and shot up in the league of oil-exporting nations.

The latter in itself is not uncommendable. However, it is doing so at the expense of something more substantive that has drawn criticisms in recent years.

We could at least have managed both with some degree of success if concerted efforts were employed and the emphasis, is not on non-essentials.

Unfortunately, corruption and greed did spread from the top-level oil parastatal and became common-place even among the common men.

The good news is this though; there is hope for Nigeria if we will consciously decide to retrace our steps to the ultimate designer of our schemes. He is faithful and just to hear us and he will heal our land.

2 Chro. 7:14 if my people, who are called by my name, will humble themselves and pray and seek my face and turn from their wicked ways, then I will hear from heaven, and I will forgive their sin and will heal their land. (NIV)

It is unfortunate that the Nigerian system is at the nadir for the umpteenth time. Now and again, changes in baton at various offices and parastatal have only given false hope.

The pessimists on the other hand will be too glad to conclude that nothing is working in any of the sectors. Many would gladly say, “We are close to the zero point”.

But then, the root cause of our problem should not be the bone of contention. Rather, the point that should be driven home is that the Nigerian system is in a dire state of health, gasping for breath with all the strength it could muster.

Urgent steps must be taken to avert the impending cardiac arrest that may result if Nigeria witnesses a reaction of sorts due to the exhaustion of the depth of patience of the citizenry.

It is in recognition of the sick state of our motherland that several groups that are not satisfied with the status quo have sprung up to proffer lasting solutions.

Christians on the other hand can’t afford to take the backseat in the matters of our nation – our Jerusalem. If we do, the consequence will be that we become handicapped and remain at the mercy of decision-makers whether the decisions are in tune with our belief system or not.

So we can’t afford to be a cog in the wheel of an enduring nation. We should make a conscious attempt at being at the driver’s seat of the wheel or any other place our impact could be felt.

Dietrech Bonhoeffer is credited to have said that “Silence in the face of evil is as good as the evil itself”. Likewise, if we allow for the “bad” to happily take up crucial positions in repositioning the nation, we can as well be ready to find ourselves in a worse position than we were at the beginning. The wisdom of God is pure and Christians are the wisdom of God on earth.

THE NIGERIA OF OUR DREAMS

“All men dream, but not equally”- T. E. Lawrence

It is pathetic that about sixty-two years after the colonial masters gave us freehand to handle our affairs, the Nigeria of our dream is still an illusion.

In retrospect though, we can have some respite as it took more than sixty years for even the United States of America to achieve what they have today.

Yet, it will be foolhardy to compare our achievements with some other countries. It is not enough excuse, to stay lax – that would be mediocrity. We can compare our previous state to where we are in the light of where we want to be and see how we measure up. In this regard, we can conclude that advancement has stalled if not retrogressed.

Martin Luther King is widely remembered for coming up with the American dream at a critical time in American history. His dream became his creed, guiding light and something he was willing to die for.

What the leaders say

In like manner, many thought leaders have come up with the Nigeria of their dreams.

For Femi Fani-Kayode, he says his dream of Nigeria is one in which Nigerians will see themselves first as Nigerians before anything else. Dora Akunyili in 2013 highlighted a nation-state founded on justice and honesty of purpose as the Nigeria of her dream during her lecture at Nike Lake Resort Hotel, Enugu.

Olukayode Ajayi-Smith sees a Nigeria of equal opportunity, freedom of information, and expression. He sees a Nigeria with respect for discipline and integrity in the nearest future. For Omano Edidheji, his ideal Nigeria is a place where the rule of law takes preeminence and the observance of human rights is premium.

For all we want, we can continue to dream. But after dreaming all we can, it is best to rise because it is in our hands.

Philips Akpoviri submits that if we refuse to get up and restrategise, we run the risk of being further down the pace. In his words, “Nigeria is not far behind because we are lazy. No, in fact, we are relatively stronger. But, in today’s world, the battle is not by strength rather it is by strategy. It is not about our size; it is by sense”.

As Christians, we know better that, “… God will choose the one to whom he decides to show mercy; his choice does not depend on what people want or try to do.”. Rom 9:16 (NCV)

The road map of the New Nigerian Project has been drawn severally by eminent personalities. It is time we took up the challenge to execute it as Christians.

Nigeria is too loaded to be irrelevant! 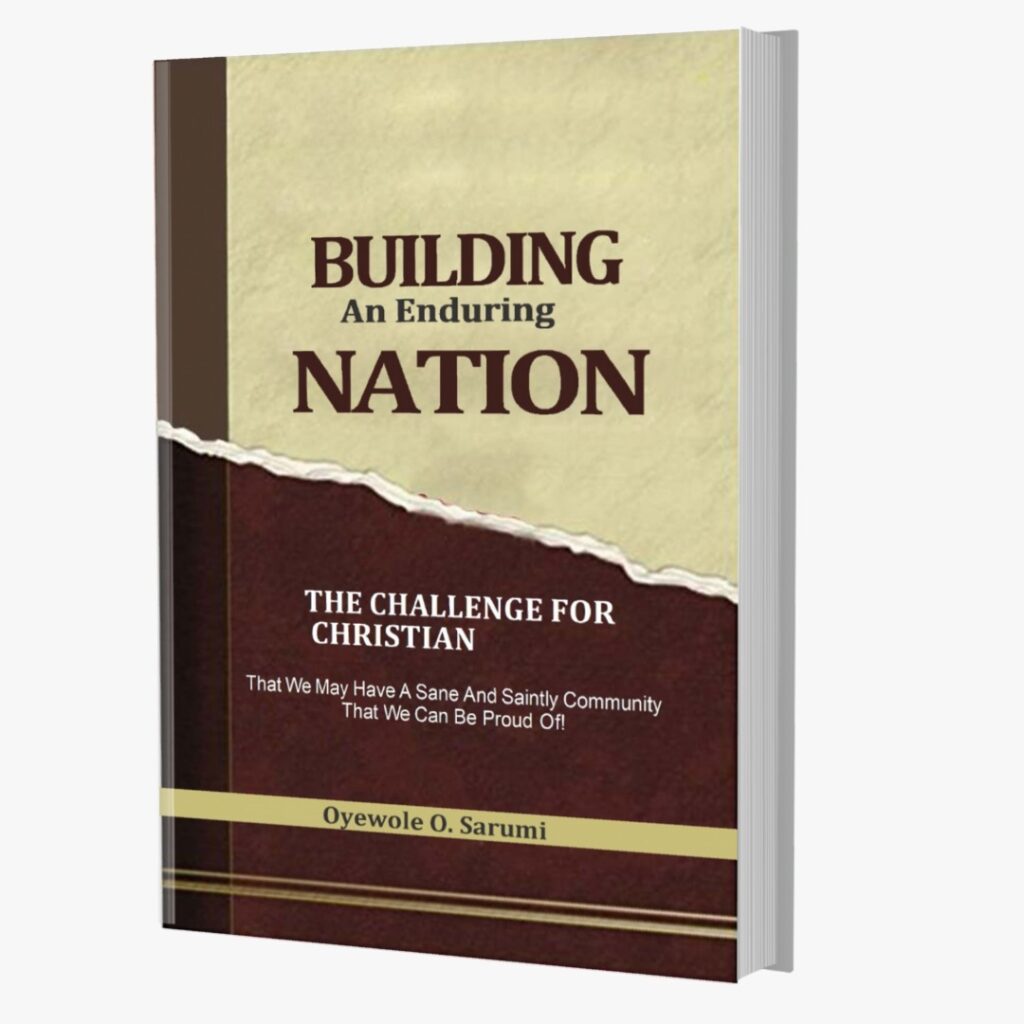 Excerpt from the book: Building an enduring nation: To get your copy, follow this link  https://www.amazon.com/dp/B0981492YH/ref=sr_1_fkmr1_2?dchild=1&keywords=Building+an+enduring+nation%3A+The+challenge+for+Christians&qid=1624981159&s=books&sr=1-2-fkmr1

He was to die @14 but he turned 60, still counting: Story of Anglican priest, Ven. Arowolo