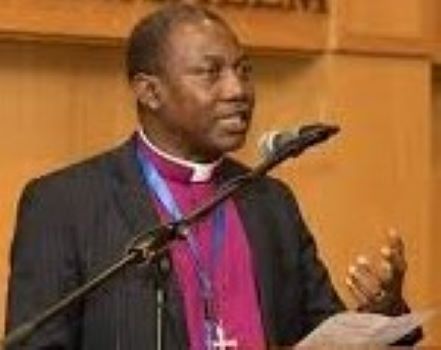 Bishop Theologian  Professor Dapo Asaju on Sunday, February 13 lamented over Nigeria, the Church, and politicians at the All Saints Church, Jericho Ibadan.

He took a swipe on Nigerian leaders wondering at the evil that has befallen the nation.

The former VC who now lectures at the Lagos State University said, “The leadership problem in Nigeria needs to be addressed. We can’t continue like this, I don’t understand what is happening. Individuals run airlines successfully. But Nigeria can’t run airlines. Shame on this country.”

Facing the Old students he said, “ It is a pity that you are seeing this evil.”

He recalled that the Nigeria he grew up to know was a country that had respect among the comity of nations. “I knew a Nigeria where the Naira was stronger than the dollar. Where we did not need to get a visa to travel to the UK, Australia. I knew a Nigeria where men of God were respected and where things worked.”

The university don however regretted that the tide has turned due to bad leadership both in the country and the church.

I addressed myself as headmaster

He recalled his days as the VC of Ajayi Crowther University how he had to introduce himself as headmaster or at best principal because according to him that was the only way to come to the level of the students and pummel them to work.

“We had to force them to read and do what they are supposed to do ordinarily. My joy is that the effort produced great results”

The former VC recalled that the son of the then governor of Sokoto State graduated from ACU noting that despite being a mission university, those who are of other faith did not mind sending their children to Christian schools.

He said the enormous resources in the church notwithstanding, many Church leaders are not playing the role they should play in bringing Nigeria to its pride of place.

My tango with Pastor Kumuyi

Asaju made an allusion to his advice some months ago to Pastor Williams Kumuyi at his 80th birthday on the need to rally around past leaders of Nigeria to address the ailing economy and the social decadence in the country.

He regretted that the advice was misconstrued and was termed as a call for insurrection by the presidency.

According to Asaju, many church leaders do not see the need to be involved in the social and political engineering of the country.

“They are busy building large structures when technology no longer encourages such. Many of our denominations are busy building structures that would become useless in the future. It is not the building that is the church. There are so many people in refugee camps that need our help. There are so many things to attend to impact lives. But unfortunately, our focus is on our empires.

“We keep praying and fasting. But the country is wasting away. The three arms of government are gone. This country is going down the hill.” He lamented.

While noting that another election is around the corner, he said many of those who are jostling for the political space are the same old people who are bereft of ideas.

He said he once had cause to tell Vice President Yemi Osibajo who incidentally is a product of Igbobi College that God put him in government for a time like this.

Asaju said, “I once had cause to talk with Vice President Yemi Osinbajo. I looked at him, I said sir, you are a pastor in the church of God. Political exigency must not make you keep quiet in the face of the rot in the land.

“My bible talks about Moses who led the children of Israel out of bondage. Elijah confronted the leadership of his days. People were trading in the church of God and Jesus used whips to drive them out of the church. May we have the courage to speak truth to power and deliver this nation.”

Asaju observed further that Igbobians have a great heritage, adding, “I went to your website to check up on the school when I was asked to come and deliver this lecture. And I found out that the school has a vision and also has a mission. Your school has the vision to produce students that are best among their peers in academics and character. That to me is a worthy legacy” he said.

He said the church has been at the vanguard of producing great leaders. He cited the instance of Oxford University which he said still graduates people in the name of father, son, and the holy spirit because of its Christian heritage. “Havard University was named after a clergy,” he said.

Asaju recalled the great impact of Ajayi Crowther, Chief Obafemi Awolowo, and many other leaders in Africa who made their mark wondering where we got it wrong as a nation.

God will raise a leader for Nigeria

He made a snide remark about those jostling for the presidency including the politician whom he said brought in the present government.

“You used your money to put a man who came to kill us in power and you that sponsored this man now want to come in. They have killed this country they want to bury us. But God will not allow them. Nigeria will rise again.  A leader will emerge. God will raise a new leader. Nigeria will be delivered by the mighty hand of God.”

Asaju urged the church to put itself together and work towards impacting the political space. “We can’t afford to stay aloof. The Church has the capacity and the wherewithal to deliver this nation. We need to rise up from our slumber and act now.”

‘My Hubby is Lazy, I Want to Quit!’…distraught lady cries out