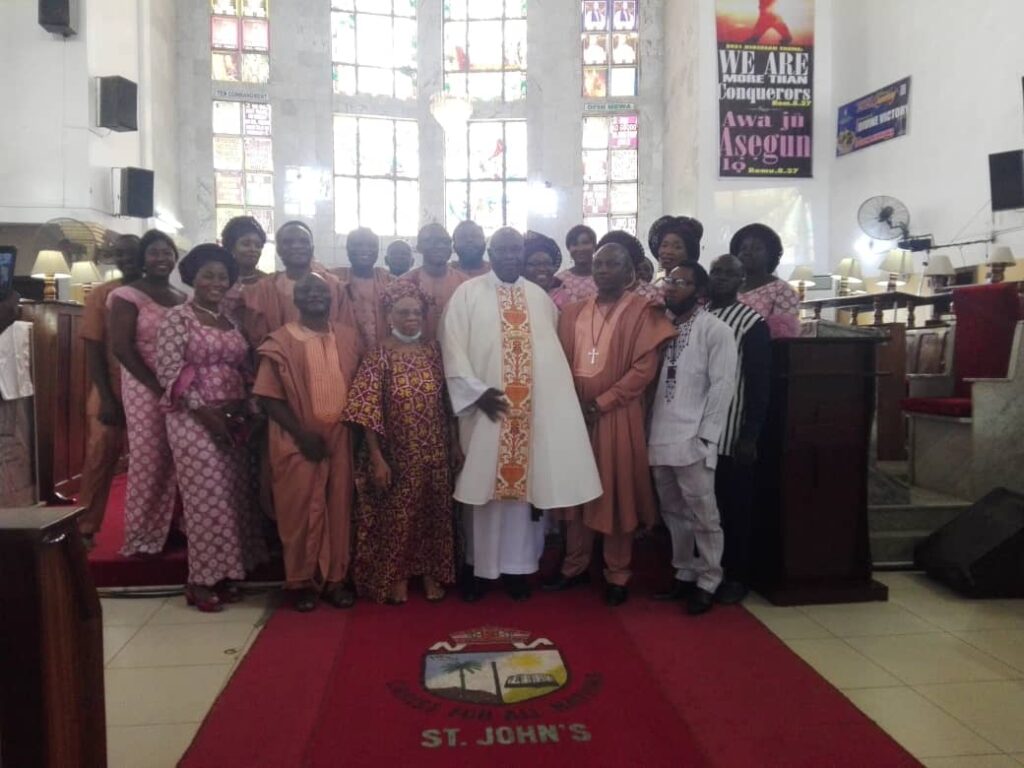 The Asaju family and Venerable Arowolo at the anniversary

Former Vice-Chancellor of Ajayi Crowther University, Oyo, Professor Dapo Asaju and his siblings on Friday, September 10 marked the 20th anniversary of the demise of their father; Oba Michael Asaju

Oba Asaju was once a  National President of the Nigerian Union of Journalists (NUJ). He was also the Eleta-Oluyara of Iyara-Ijumu in Kogi State before his transition.

The event which was held at the St. John’s Anglican Church, Iju Ishaga, Lagos, attracted friends and well-wishers of the late Asaju.

Speaking at the event, Vicar of the Church, Venerable Taiye Arowolo said the late Asaju was an Anglican indeed and a community leader of repute.

He however appreciated the children for choosing the church as the venue of the important occasion.

According to him, “Baba was a devoted Anglican and one who served God with all commitment while alive,” he said.

Arowolo added that the children of the deceased did well in bringing the event to the parish. “I must appreciate you all for deciding to choose this parish for this occasion. You left other bigger and more beautiful parishes to have the remembrance of Baba in this church, we appreciate you a lot and we pray that the unity in the family shall continue in the name of Jesus Christ.

In his remark, the first son of the late traditional ruler;  Mr. Dele Asaju, appreciated the church for playing host to the family on the occasion.

He also appreciated his siblings including Professor Dapo Asaju, the former Vice-Chancellor of the Ajayi Crowther University, Oyo, and surviving matriarch of the Asaju family, Mrs. Asaju who was also at the event.

“We thank God our father was an Anglican to the core, at the same time, he allowed us to attend other churches. Some of us are in Christ Apostolic Church. He would be very happy looking down today to see one of his children is a Bishop of international standard, in the person of Bishop (Professor) Dapo Asaju,” he said. 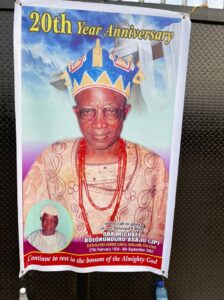 He applauded the influence of all the wives in the family and their cooperation. “I thank everybody here today, I appreciate our mother, she is the mother of all of us. if she is not accommodating, nobody would be here today.

“If a man is doing well, it means he has a good wife. We are able to accomplish things today because God directs us; we are nobody without our wives. Mama Banke is the first wife and she is the mother of all, I am very proud of her, she is a builder.

“I also thank my sister, Mrs. Oyebo nee Asaju. She is married but we did not leave her alone, she always looks back, I appreciate her.

“Another person I want to thank is Dayo Asaju, he is the replica of our father. I thank his commitment to the family and the calmness, reservation, and respect he has for me. I am eternally grateful,” he said. 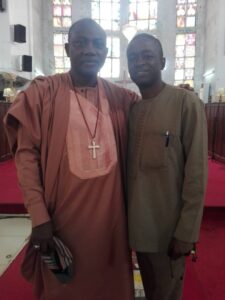 Professor Dapo Asaju and Mr. Dayo Emmanuel at the anniversary

Asaju was a journalist and Public Relations consultant of repute and was once the National President of the Nigerian Union of Journalists (NUJ) between 1977 and 1980.

He however retired home to serve as the Eleta-Oluyara of Iyara-Ijumu in Kogi State until his passage on the 9th of September 2001.