Trending Now
Uma Ukpai prays for Obi says, “Lord do...
Bonnke’s successor, Evang. Kolenda drops bombshell, says, “Anointing...
A “widow’s” lamentation and lessons for RCCG, others...
God’s word: A case for non-English speakers in...
Adeboye: Some women consider it privilege to sleep...
Despite challenges, God has been good to Nigerians...
Writers save lives, solve problems says Omotosho @...
Prince Harry’s book that hit 1.2m sales in...
Ex-Apola king, Idowu Animasawun celebrates 85th birthday with missions...
Nigeria can’t make progress if the Church is...
Home News “Why I changed my name from Babatunde to Babalade and my monthly deliverance programme”
News 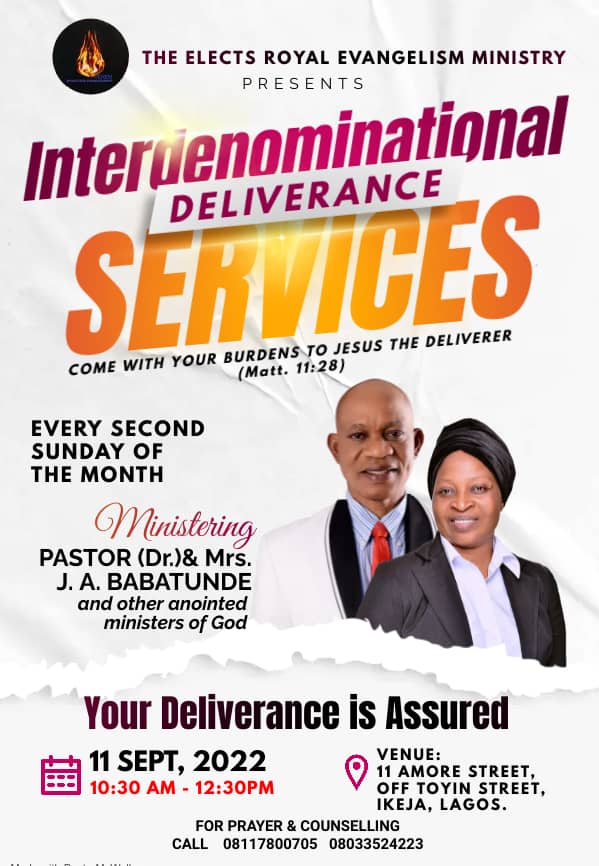 67-year-old Pastor Julius Ajayi Babatunde who recently changed his name to Julius Babalade has explained why he had to change his name.

Babatunde changed his name a few days after he had sent out flyer advertising a monthly deliverance programme with the old name.

He said he had to change the name when he could no longer resist God’s instructions.

“God has been telling me to change the name many years ago. But I was adamant.”

Over the years he discovered that things were not going on well. “My life has been a bundle of challenges. But I did not link some of these misfortunes to the name Babatunde until God opened my eyes.”

He explained that Babatunde simple means a reincarnation of the father who had died. In my own case, it is my grandfather. If it is a woman that was born after the death of a grandmum in Yoruba land she will be named Yetunde”

The cleric who is the founder of the Elects Royal Evangelism Ministry said his decision to change the name is personal. “It is a personal decision in line with God’s instruction. I will not advise those who bear the name to change it if they don’t have a leading from God.

Citing instances of Abraham, Jacob, Sarah and Saul who was later known as Paul, Babalade states, “The cases in the Bible were isolated cases. God specifically changed the names of Abram to Abraham, Jacob to Israel and Sarai to Sarah to fulfil certain promises in their lives. We are not told if Paul actually changed his name. The Bible only made us understand that Saul is also known as Paul.”

Babalade and the Bible connection

On the new name, he said, “God gave me a scripture, Prov 17v6: Grandchildren are the crowning glory of the aged, parents are the pride of their children.” My new name is Babalade is derived from that scripture, meaning the father is the glory of the child.

“In my own case, however, God is my father. The Baba in the new name is God. So the new name simply means God is my pride, or some other translations say parents are the glory of the child.  For me, God is my glory”

He said the urge to change the name came after he had already received instructions to begin a monthly deliverance programme that will bring people from other denominations together. “If you look at the flyer, I had already printed the flyer before I decided to obey God. All along I was adamant,” he said.

The deliverance programme according to him will be targeted at individuals and organisations who have challenges and who need divine intervention.

Blame Christians in govt for Nigeria’s woes, not only Buhari- Cleric