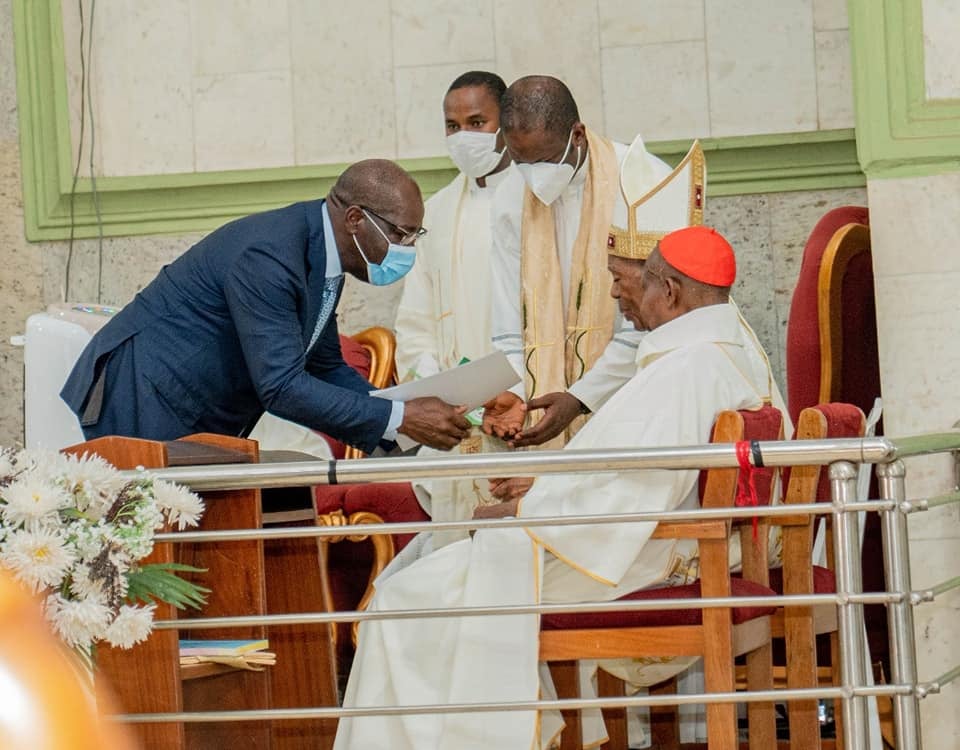 The Edo State Governor, Mr. Godwin Obaseki has described Emeritus Catholic Archbishop of Benin, Most. Rev. Patrick Ebosele Ekpu has a great servant of God who has drawn many souls to Christ.
Obaseki made the remark at the 50th Episcopal anniversary and 90th birthday celebration of Archbishop Ekpu. The event was held at St. Paul Catholic Church, Airport Road, Benin City on Wednesday, November 1o
A statement by Crusoe Osagie, Obaseki’s media aide gives a detailed account of the celebration
Obaseki noted that Ekpu’s contributions had led to the development of Edo State and Nigeria adding that, “ the clergy’s service in God’s vineyard has drawn more Christians to God.”
His words, “Our father has lived a very illustrious life and a life of service. His service in the vineyard of God has provided the opportunity for many Christian faithful to sustain personal connection and relationship with God.”
The Edo Governor said “Ekpu and other Nigerians were called into the service of God during the civil war.  They later became Bishops in the Catholic Church. 50 years on, they have changed the face of the church in Nigeria.”
He said further, “The role of the Catholic Church became significant and very prominent particularly after the civil war. This is because of the diligent work our father commenced as a Bishop of this Diocese. As a priest, he has risen to the pinnacle of his Episcopal calling and has seen it all. We will continue to cherish his wisdom and experience.
“He brought the Church closer to the people. He created an awareness where the people, regarded as fetish, got to understand Christianity better and became closer to God.”

Obaseke said Ekpu made huge contributions to the development of society. “At the age of 90 years, he continues to provide leadership even in retirement. We will continue to tap from his rich pool of wisdom to guide us as we chart our path through these very difficult times.” Obaseki said.
The Archbishop of Benin and President, Catholic Bishops’ Conference of Nigeria (CBCN), Most Rev. Augustine Akubeze said Ekpu is being celebrated because of his industrious labour in the vineyard of God.
“He has brought success to the Church and an author of many books which has touched lives and transformed the society, state and nation at large,” said Akubeze
Other guests at the occasion include the Deputy Governor of Edo State, Rt. Hon. Comrade Philip Shaibu and his wife, Maryann; Secretary to the Edo State Government, Osarodion Ogie Esq.; Chief of Staff to Edo State Governor, Hon. Osaigbovo Iyoha.
Also present was the Esama of Benin Kingdom, Chief Dr. Gabriel Igbinedion; Former Deputy Governor of Edo State, Mike Ogiadomeh; Edo State Head of Service, Anthony Okungbowa Esq.; and Edo State PDP Chairman, Tony Aziegbemi, amongst others.
0 comment 0 FacebookTwitterPinterestEmail

Ikoyi Building Collapse: Widow of Bob-Oseni, U.S-Based friend of Osibona who died with him writes on husband’s link with Osibona