Trending Now
A “widow’s” lamentation and lessons for RCCG, others...
God’s word: A case for non-English speakers in...
Adeboye: Some women consider it privilege to sleep...
Despite challenges, God has been good to Nigerians...
Writers save lives, solve problems says Omotosho @...
Prince Harry’s book that hit 1.2m sales in...
Ex-Apola king, Idowu Animasawun celebrates 85th birthday with missions...
Nigeria can’t make progress if the Church is...
Peter Obi: I have not promised I will...
2023 elections and the imperative of divine timing
Home News Nigerian preacher arrested in UK for preaching the gospel 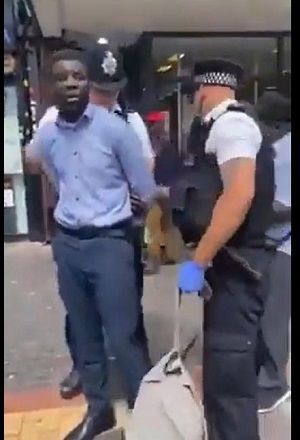 Nigerian preacher arrested in UK for preaching the gospel

A preacher suspected to be a Nigerian has been arrested in an unidentified street in the UK as shown in a YouTube video dated July 17, 2022

In the video, two police officers are seen molesting the preacher.

The preacher declared that he was not saying anything wrong and that he would continue to preach the gospel.

He insisted that he did not exhibit any anti-social behaviour while preaching the gospel.

As the exchange progressed, passersby were attracted to the scene. They also protested saying the British police had no right to arrest him.

The officers placed the hands of the preacher on his back and put handcuffs on them.

But the preacher kept protesting that the handcuffs were hurting him while insisting that he did not do anything wrong.

He said, “I did not do anything wrong, I did not touch anybody. I was just preaching the gospel and distributing tracts.”

Some of the passersby condemned the police officers saying the arrest was racist in nature. They alleged that if it was a white man they would not have carried out such arrest.

The officers then requested the name and residential address of the preacher who was a bit hesitant to give those details. After much persuasion from passersby, he agreed to release his driver’s license which has all his information. The video ends abruptly.

It is not exactly clear when the incident happened, but that would not be the first time police officers in Britain would arrest preachers in public space.

Past arrest of preachers in the UK

On February 23, 2019,  Oluwole Ilesanmi a 67-year Nigerian preacher was arrested by some British police for an alleged “breach of the peace”.

Ilesanmi had preached the Gospel outside Southgate Underground Station.

Ilesanmi pleaded peacefully with the two white police officers who arrested him not to take away his Bible in a viral video that attracted over 3 million views as it February 26, 2019.

Before then they had placed his arms behind his back in handcuffs and taken the Bible from him. Reports indicated that before the police arrived, the preacher was being confronted aggressively by a man purportedly in his 20s, wearing a hooded top.

The man reportedly used derogatory names on the Bible and God with his face close to that of Ilesanmi. He also threatened him, brandishing a closed fist holding prayer beads.

The police claimed there had been a complaint of “Islamophobia” made against Ilesanmi. But the young man who allegedly accused him ran away from the scene as soon as the police arrived.

Ilesanmi was later released and awarded a £2,500 payout for wrongful arrest.

The UK Police, however, refused to apologise for taking him away from the tube station where he was arrested.

Tinubu, Atiku and Obi: The 2023 dilemma by Ebun-Olu Adegboruwa

I hope United Kingdom should stop using these uneducated police officers to harass and destroy ppls lives. I hope those officers are fired to be a warning to other police officers. Compensating the man is not enough. Firing the officers will teach others lessons