Trending Now
A “widow’s” lamentation and lessons for RCCG, others...
God’s word: A case for non-English speakers in...
Adeboye: Some women consider it privilege to sleep...
Despite challenges, God has been good to Nigerians...
Writers save lives, solve problems says Omotosho @...
Prince Harry’s book that hit 1.2m sales in...
Ex-Apola king, Idowu Animasawun celebrates 85th birthday with missions...
Nigeria can’t make progress if the Church is...
Peter Obi: I have not promised I will...
2023 elections and the imperative of divine timing
Home Features Before you say “I do”…An xray of “Legal insights about marriages in Nigeria” 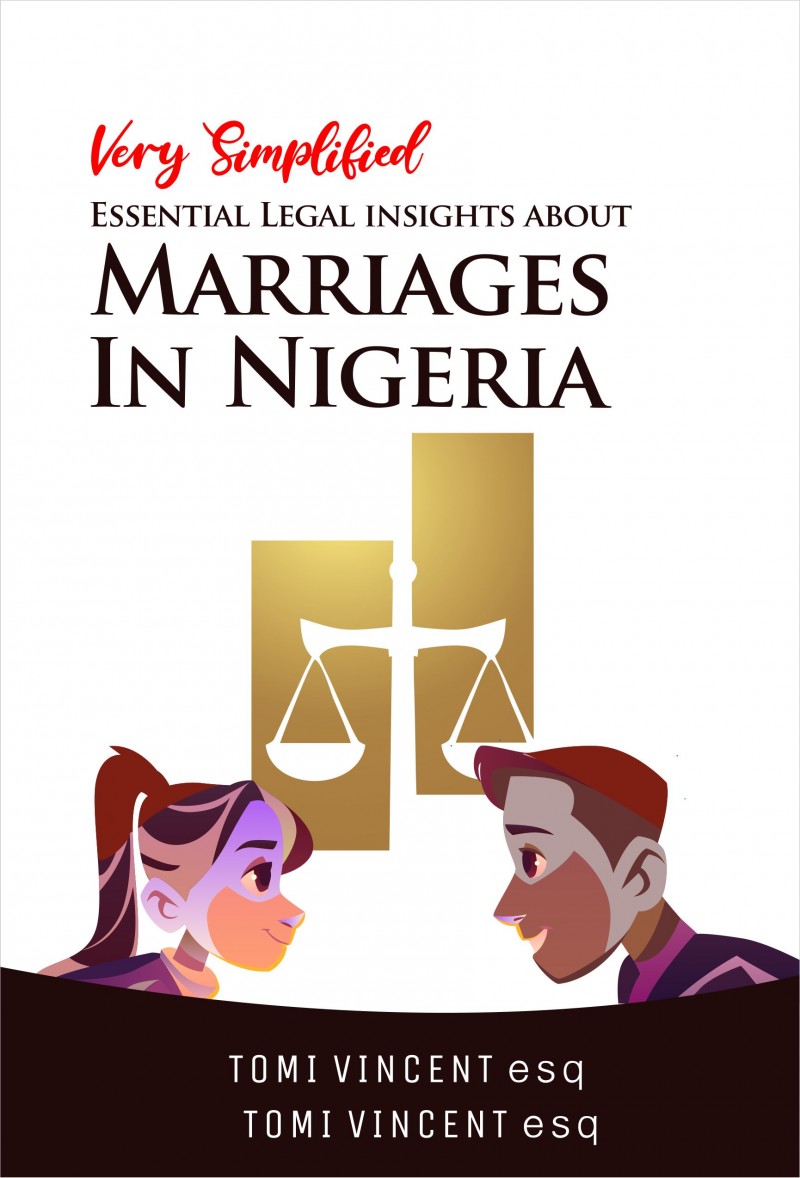 Many are married. Many want to marry. Yet, some, if not many don’t know the legal implication of marriage.

It is this ignorance about marriage that Barrister Tomi Vincent tries to cure in his book, Essential legal insights about marriages in Nigeria.

Vincent who is the legal adviser of the Lagos chapter of the Christian Association of Nigeria says the book was written to demystify the legal jargon about marriage and “make it as relevant, pliable and useful as possible” for many people

The book was also written to save lives, put marriages in focus and clear undue expectations from couples.

Part one is an overview of the types of marriage recognised by law in Nigeria.

Part two deals with marriage and legal inadequacies while the third part is on the legal implication of divorce vis-a-vis property ownership.

The three types of marriage

Vincent states in the book that the three types of marriage recognised are Statutory, customary, and religious marriage.

He emphasised however that marriages consumated within each of the systems have to follow the rules of that system before they could be termed legal.

If a traditional marriage for instance is not done according to the traditional rites prescribed by the custom of the parties involved, the marriage will be termed illegal.

The trap in the church marriage is that “A Christian husband who for any reason changes his religion may no longer be bound by the tenets of the Christian faith which prescribes one man one wife.”

A church marriage according to the author does not automatically become a statutory marriage. For it to become statutory, the couple must take steps to comply with the statutory requirements and not just rely on the code of the church.

The author explains in chapter three that it is only statutory marriage that allows monogamy.

This implies that a third party is not allowed into the marriage until the death of one of the partners or after divorce.

Marriage to minors not legal

Under the law, marriage to minors is also not allowed. “Where any of the parties is under 21, the parental consent must be given in writing by the father, the mother, or guardian. If any of these people are not available, the consent could be given by the state government or high court judge.”

But if the parties are 21 years and above, parental consent is not required. It is assumed that once the parties are of age, they can take decisions as to whom they want to marry.

Contrary to what many think, there is nothing like court marriage. The author writes, “People call it court marriage because marriage registries until recently were always located inside court premises.” The right description according to him is statutory law marriage.

In part two of the book the author treats, “marriage and legal inadequacy”

On the other hand, a voidable marriage is deemed on the face of it to be good while it subsists. But it may be annulled at the instance of any of the parties due to an extant defect which goes to the root of the union.”

The author gives several other reasons why a marriage could be dissolved. One is the impotence of either party at the time of the marriage.

While explaining that impotence is different from infertility the author states that an annulment can’t be obtained because of infertility.

Other reasons are the mental deficiency of the parties in the marriage and communicable venereal disease.  Marriage could also be dissolved if, at the time of marriage, the wife was impregnated by someone other than the husband.

No divorce until after two years

In chapter five, the author talks about divorce or dissolution of marriage. He states that “parties are not allowed to file for divorce where the marriage is less than two years”

The author devotes ample space to explaining various other grounds on which a marriage could be dissolved.

He states for example that a marriage could be dissolved on the basis of the presumption of death. This is a case where it is presumed one of the parties is dead due to a long absence.

Couples can own property separately

Chapter six of the book is on the rights of spouses after divorce while chapter seven is on sharing of properties or settlement of the spouses after the dissolution of marriage.

The author states for instance that Nigerian law permits a spouse to own properties in his or her name separately during the existence of the marriage as if they were not married.

The beauty of the book

The beauty of the book is the author’s ability to make it practical. He cites several cases that have been addressed in the court of law. Thus, the reader has insights into how some of the knotty issues in marriage were legally treated.

He cites, for instance, the example of a couple that divorced. But the wife was able to claim the house she and her husband lived in because she had evidence of being the owner.

Vincent told Church Times in an interview that proper education on how the marriage institution works will go a long way to stem crises in many homes.

“It is not just getting married that is the issue, but understanding the reason for the union. If people know the legal requirements for their marriage they would count the cost before going into it.”

He reasoned that many Christian marriages are hitting the rocks because of the lack of patience of the parties involved and high-level ignorance.

“That is why I will always suggest that anybody going into marriage should find a way of doing background checks of their would-be spouse before entering into the union,” he stated.

How to get the book: Follow this link: https://selar.co/m/legalsideibooks 📌 *Okadabooks*

You can also get it from Amazon on: https://www.amazon.com/-/e/B08LZDQBRK

2023 Winning Strategy: Call For Sharia In Kano While Christians Are Romancing ‘Taqiya’ In Lagos