Trending Now
A “widow’s” lamentation and lessons for RCCG, others...
God’s word: A case for non-English speakers in...
Adeboye: Some women consider it privilege to sleep...
Despite challenges, God has been good to Nigerians...
Writers save lives, solve problems says Omotosho @...
Prince Harry’s book that hit 1.2m sales in...
Ex-Apola king, Idowu Animasawun celebrates 85th birthday with missions...
Nigeria can’t make progress if the Church is...
Peter Obi: I have not promised I will...
2023 elections and the imperative of divine timing
Home Columnist Theology and Christian dressing: Profile of heavily bearded saints (3) 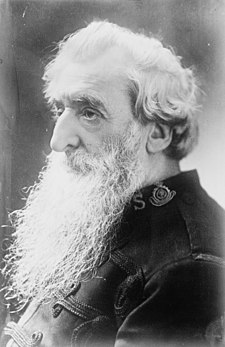 The following extracts from his numerous hymns reveal the heart and ministry of A. B. Simpson:

Now it is the Lord;

Once His gift I wanted,

Now, the Giver own;

Once I sought for healing,

All in all forever,

Everything is in Christ,

And Christ is everything.

Once a half salvation,

Once ’twas what I wanted,

Once I tried to use Him,

Now He uses me;

Once the pow’r I wanted,

Now the Mighty One;

Once for self I labored,

Now for Him alone.

And the cross hath set me free;

I have ris’n again with Christ,

And He lives and reigns in me.

Oh! it is so sweet to die with Christ,

To the world, and self, and sin;

Oh! it is so sweet to live with Christ,

As He lives and reigns within.

This the secret of the holy,

Not our holiness, but Him;

O Lord! empty us and fill us,

With Thy fullness to the brim.

Booth was an English preacher who, along with his wife, Catherine, founded the Salvation Army and became its first “General”. This fundamentalist Christian evangelical movement, with a paramilitary structure and government founded in 1865, spread from London, England, to many parts of the world and is known today as one of the largest distributors of humanitarian aid, and the followers were trained to maintain other-worldly attitudes.

The motto of the Salvation Army is “Blood and Fire”, which reflects its spartan and self-sacrificial structure. It was William Booth, along with Charles G. Finney and Dwight L. Moody who first initiated and popularized the practice of Altar Calls about two centuries ago.

The Salvation Army still exists till today as a very discipline, self- effacing and conservative christian organization. The flamboyant and charismatic poise prevalent today is totally absent among the Salvation Army.

In Chicago, he built one of the major evangelical centers in the country, which is still active. Working with Ira Sankey, his singing companion, he toured the country and the British Isles, drawing large crowds. On one of his crusades, over a million people, including the President of the United States of America attended, with thousands of converts registered.

His last statement as he was dying at 62 is very significant, “The earth is receding and heaven is opening before me,  If this is death, it is sweet! There is no valley here. This is my crowning day. God is calling me and I must go”. Then he turned to tell his wife, “Mama, you have been a good wife, no valleys, no hills, it’s all bliss”-

Sadhu Sundar Singh, popularly known as the apostle of the bleeding feet, had a vivid encounter with Jesus Christ. Being a radical Hindu, earlier in the day he had torn the Bible in the Christian school he was attending.

Thereafter he became restless. He prayed to whoever God was to restore his peace otherwise by 4am he would go out and lay his head on the rail adjacent to their home, for the early morning express train to crush him.

As he was praying, he suddenly became aware of his interior flooded with extraordinarily bright light. The Lord appeared to him in his room showing His pierced hands and saying in Hindustan language, “Why do you persecute me, after all, I died for you on the cross?

He later recounted his shock, because he was expecting Krishna, Buddha or any other Hindu god to appear to him. He rose from the floor, went to knock on the door of his father’s room, announcing that he had seen Jesus and decided to follow Him.

His father told him to return to his bed that he must be having fever. But this “madness” as they termed it persisted for days. His wealthy fundamental Hindu family could not stand it. They persuaded him with gold and riches if he returned to his senses, but he declined. They promised to arrange a wife for the 16-year-old Sundar, but he declined and announced that he was following Jesus.

The family called a meeting and concluded that Sundar had to be banished from the home, so he would not bring disgrace to the high-caste Hindu family. After secretly poisoning his food, he was banished from home.

He later collapsed in a forest. A rescuer took him to his own home and invited a doctor. The doctor examined Sundar and told his host that the case was beyond medicine and that he would return in a few hours’ time to issue a death certificate.

He returned later to find Sundar well and reading the Bible. He was amazed and out of curiosity, he too went to look for a Bible to read. God touched him and he abandoned his medical practice to fully serve Christ uninhabited. Seven years later, Sundar met him as a medical missionary in Japan.

Sundar took to the roads barefooted to preach virtually in nearly all the continents, sleeping anywhere darkness met him. He never begged for money, convinced that if God felt he needed food, he will delegate someone to feed him. Any funds given to him, he would use and would not keep the excess to the next day but would give the needies he came across. He resolved to live entirely by faith on a daily basis.

Unprecedented miracles followed his missionary journeys. People were influenced and irrevocably transformed merely by his face and presence. He resolved to entirely tow the path of Jesus Christ, praying to die at age thirty-three and a half.

He became extremely sorrowful when he exceeded that age. Sundar Singh was reported in the newspapers, though controversial, that he was “translated” during his last missionary journey to the hostile Tibet, but his body was never found till today.

Among his favorite sayings were:

* ” The capital of heaven is the heart where Christ dwells”

* “The true Christian is like sandalwood, which imparts its fragrance to the axe which cuts it, without doing any harm in return”

* From my many years of experience I can unhesitatingly say that the cross bears those who bear the cross.”

The testimony of Zac Poonen concerning Sadhu Sundar Singh was that he was the greatest Christian to ever come out of India.

Personally, in my own opinion, I have difficulty placing him or Jacob Boehme as the greatest Christian that ever lived beyond the pages of the Bible though St. Martin de Claude placed Boehme above Paul which I strongly don’t subscribe to.

Now, like the high priest who tore his garments declared in Matthew 26: 65, what further need do we have for witnesses? Does one need an Ahithophel or Agabus to come and confirm that these men were approved unto God in spite of their beards some of which reached to their chests as in the case of General William Booth and A. B. Simpson?  Some of us in the 21st century seem too preoccupied with mundanes, externalities, and superfluity of naughtiness?

Whereas a typical saint, A. B. Simpson of the previous generation, was sharing his experiential testimony of “..…..Oh! it is so sweet to die with Christ, to the world, and self and sin, Oh! it is so sweet to live with Christ….”. And Sadhu Sundar Singh was also cautioning the Body of Christ that “perhaps the greatest barrier to revival on a large scale is the fact that we are too interested in a great display. We want an exhibition; God is looking for a man who would throw himself entirely on Him. Whenever self-effort, self-glory, self-seeking, self-promotion enters into the work of revival, then God leaves us  to ourselves”. But some still seem preoccupied with the dying to beards, and moutaches, and sideburns.

May God have mercy on those of us wasting Kingdom time in our generation whose daily business is to major in minor and to minor in major, not according to the scriptures. I wish you all my wonderful friends a glorious New Year and a higher horizon with the Lord throughout 2023 as we resonate with this hymn :

Give up the world, Christ to obtain,

He is your heart’s very need;

What else can you desire or seek?

All things are empty indeed!

2 Give up the world, Christ to obtain,

He is the One you require;

Once you receive this glorious Christ,

3 Though very great is all the world,

And very small is your heart,

Yet the great world with all its wealth

Never can fill your small heart.

4 If you have Christ, you have all joys;

Without this Christ, only pains;

Where there is Christ there morning is;

Where He is not, night remains.