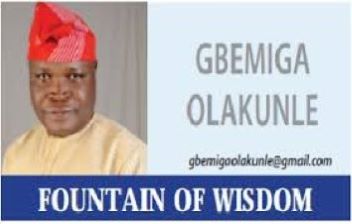 A father can be biological, spiritual, or even political. A responsible biological father do oversees the overall well-being of his household in terms of security and timely provisions. The same attributes are expected of any responsible spiritual or political godfathers too.

When a Child has a responsible father or anyone playing the role of a father – figure in his/ her life, such a child will go far in life provided is obedient to the father’s instructions.

The backgrounds of some criminals troubling the peace of our society today may be traceable to children from broken homes, those who have no responsible biological fathers, or anyone playing such roles in their lives. And sometimes some of these children who come from responsible homes may venture into crimes due to bad parenting or bad influence from peer pressure groups.

A father’s good name can open doors of good opportunities to his children even after his death. Little wonder the Bible says that a good name is preferred to gold and silver.

Recently, Tunde Jakande narrated how the name of his late father- Lateef Jakande saved his life when he found himself in a critical medical condition because of his father’s good policies and deeds when he was Governor of Lagos State especially in the area of Education.

The Doctor who treated him was a beneficiary of Alhaji Lateef Jakande Free Primary & Secondary Schools education policy then. The Doctor had lost his father as a child and no one was ready to sponsor his education and the saving grace for him then was to attend the then Jakande’s School.

On a negative note, there are some family names that people don’t want to associate with because of bad legacies that may be traceable to the bearers.
Since a child’s destiny can be made or marred by the role of a father, let’s choose to be good role models for these children and be there when they need us in their formative years.

The same is applicable to those who play the roles of Spiritual fathers as Pastors or Overseers of GOD’s heritage. Let’s provide the needed spiritual coverage and green grass beside the still waters.  This will enable the flock of Christ under our watch to have no reason to wander away into the bush and become prey to wolves in sheep’s clothing. When the flock is well nourished and fed, on their own volition, they will willingly give their milk to their Spiritual fathers.

Let’s, therefore, pray that GOD should give us real fathers in our family, Community, Spiritual, and National setups in JESUS Name.

My greatest wish before God calls me home-Prophet SK Abiara