Trending Now
Adeboye: Some women consider it privilege to sleep...
Despite challenges, God has been good to Nigerians...
Writers save lives, solve problems says Omotosho @...
Prince Harry’s book that hit 1.2m sales in...
Ex-Apola king, Idowu Animasawun celebrates 85th birthday with missions...
Nigeria can’t make progress if the Church is...
Peter Obi: I have not promised I will...
2023 elections and the imperative of divine timing
RCCG announces Prof. Aboaba’s passage says “He is...
The Paternoster Code: Debunking the age-long misconceptions about...
Home Features Rev. Obiora Ezekiel: The untold story of an unsung God’s servant
Features 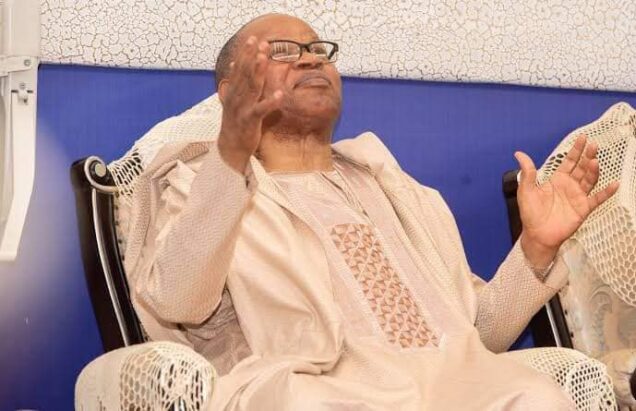 The news on Sunday, November 21 of the death of Rev. Obiora Ezekiel, founder of Christian Pentecostal Mission International came to many as a shock. But it was not unexpected. He was 78.

Apart from that, the renowned evangelist who held sway in the 70s had lost his sight for about two decades before his passing on. He was not also in the best of health.

But all that did not detract from the great impact and work of ministry that God wrought through him.

Known as demon bulldozer in his early years in ministry, Ezekiel perhaps never set out to start a church. He was more an itinerary evangelist who loved God and was content with preaching the gospel.

Sources close to him in his early years described him as an evangelist who never wanted the limelight. “He was just content preaching the gospel in those days. I was with him when he was going on crusades all over the country. He did not seek attention. As a matter of fact, his death would have been kept from the public. He was not the type that liked the attention of people” said a source who would not like to be named.

The source informed that he knew Rev. Ezekiel as far back as his years with a ministry known as Free Gospel Society in Palm Avenue, Lagos founded by one Pastor Martins. “That man called Martins was sponsoring a lot of evangelists in the country. Pastor Ezekiel had a special place in his heart. He made him Evangelist 1 despite the fact that he met some other evangelists in the ministry.

“This man sponsored evangelists to go to all the 12 states in Nigeria then. He gave them vehicles and gave them accommodation. He was a wealthy man. I was with the ministry then. Rev Ezekiel was Evangelist 1 as I said earlier. He was going around the country for crusades and I was always with him. I actually gave my life to Christ in one of the crusades where Rev Ezekiel preached.”

How CPM was founded

Recalling how the CPM was founded, the source said, “There was a particular evangelical trip that we embarked on for three months. It was during that trip that reports reached us that Pastor Martins who was sponsoring the crusades had taken another wife apart from his first wife.

“Many members were not comfortable with that decision. They could not convince him not to go ahead. That was what scattered the ministry. It was during this crisis that many members of the Free Gospel Society founded by Pastor Martins pulled out. Some stayed back. But those who pulled out formed the CPM led by Rev. Ezekiel.

“From what I knew, starting a church was not something he planned for as at the time he did. Perhaps he would have still established his own ministry. But it was the crisis of that period that informed the establishment of the church.”

According to the source, “CPM started in the compound a fellow at 135 Isolo road, Lagos. We used a makeshift canopy for cover from sun and rain. We were in that compound for about two years before the church secured land and moved to Ajao Estate.”

The impact of Rev Ezekiel was so great that several canopies had to be mounted outside the compound of the first venue. The population of the church rose to over 1000 from about 100 people from his former ministry that started it before they moved to their permanent site in Ajao Estate.

In those early days evangelist Timothy Iyanda, Evangelist Timothy Obadare, Evangelist Omooba Jesu, and a host of others were also frequenting Lagos. The late Archbishop Benson Idahosa had also started a branch of the Church of God mission not far from the CPM headquarters in Ajao Estate. It was a period where the gospel was more of a binding force. The burden for souls superseded every other interest.

Ezekiel was more known in the deliverance ministry. His era popularised the casting out of demons. There were stories that whenever he laid hands on people, strange objects would come out of some. The experience of being slain under the power of God was also common during his ministrations. This became more like a trademark of ministers who trained under him. Many of them operated in the miraculous.

One of those who trained under him and who also made a great impact was Pastor Victor Okorie. He was sent by the ministry to Ajegunle Apapa in the 80s. It did not take long for CPM to shake the town. God used Okorie in the miraculous such that a large crowd of people thronged the worship centre of the church on a weekly basis.

Many of the people who spoke with Church Times could not tell the story of Ezekiel’s conversion. But there are indications that he must have been born again while in the east before he came to Lagos in 1954.

Another source said, “I can’t tell specifically how he gave his life to Christ. I don’t know much about that. But he used to tell us that he worked in the house of Pastor Martins as one of his domestic staff. I think he was a gateman or so. But he probably had been a Christian before coming to Lagos. It’s just that I don’t know the circumstances that led to his conversion.”

Though the church was born out of the crisis that rocked Free Gospel Society, Ezekiel did not fall out with Pastor Martins. “He was always calling him baba. He had a lot of respect for him. Rev Ezekiel held him in high regard despite what happened. He took care of him before the man passed on a few years ago.” said the source.

Rev Ezekiel was to later make up for his lack of education in the early years. He embarked on some self-study and read up to earning a Ph.D. in Theology. He is also reputed to be a four-star General in Chaplaincy

While announcing his passing on REV. JOHN U.EZEH Coordinator; CPM Int’l, Imo state, Nigeria and member board of trustees of the church said in a published piece that “our General, our Field marshal, the man that saw the vision, the man that began the race, the man on whose shoulder we’re all climbing, the Founder and General Overseer of Christian Pentecostal Mission International, REV. DR. O. EZEKIEL, has gone to be with the LORD just a few days ago.

“Before his departure, he had been telling us to keep the vision alive, and the fire burning: that the mantle is with us; the glory is with us while he goes to wait for us to come over when the time is ripe. This was a man whose doggedness in the gospel gave him a title, “Demon Destroyer”; the man who is best known as a teacher of DIVINE NATURE. He has left his mantle with us to continue where he stopped to move CPM to the next level.”