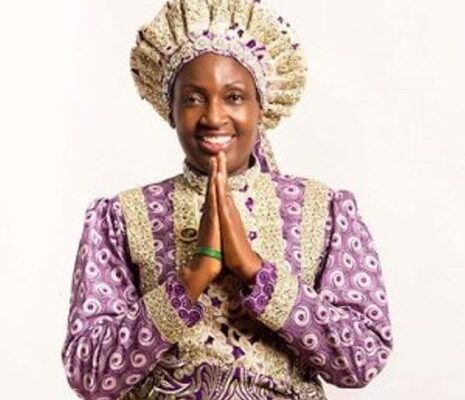 The magnificent building recently donated to the Cherubim and Seraphim Church by the family of Rev Mother Esther Ajayi and named  Saint Moses Orimolade Holy Land perhaps would not have been built if not for an experience the Rev Mother had in the church in January 2018.

The magnificent complex which is situated at Ijaiye Ojokoro, Lagos was dedicated on Saturday, February 7.

But Rev Mother Ajayi known for her philanthropic gestures and support for church projects said her experience while worshipping at the church when it was in its old state made her decide to build the church.

She said in a video shared online that she was in the church a few years back for a worship service and while worshiping and throwing her hands into the air she forgot the ceiling fan was close to her and ran her hand through the ceiling fan.

“Usually, when I am in church, I like to gesticulate and throw my hands everywhere worshiping God. This particular day, I forgot the ceiling fan was up, I was shouting hallelujah and threw my right hand up, the next thing was a screeching sound.”

The moment the fan hit her fingers, she thought the fingers were cut off and blood was spilling. But she did not want to cause a scene in the church. She beckoned on her son to see if there was blood all over. She signaled to her husband who was also in the service and made to leave the church without causing a scene.

She did not have the courage to look at the hand thinking the fingers were gone and blood was all over.

But as God would have it, the fingers were still intact. She got home and reflected on the incident and concluded that God must be saying something to her about the church, that there is a need to rebuild the church which was just a bungalow size building.

Pronto, she told her husband and they invited one Architect Majekodunmi to put up a plan and the work began.

She said to her listeners that God speaks to people in different forms noting that she probably would not have thought of building the church if she did not have that experience.

At the dedication, her husband,  Ademuyiwa Ajayi who is The Senior Pastor of Love of Christ Generation Church C&S London had told the congregation that it pleased God to grant his family the honour of building the church.

He said “Many years ago, nobody could think this kind of auditorium would be erected here. But God used us as his instrument. If we have not released ourselves for God to use, He would use someone else. A lot of people could have done what we did but they did not have the grace.

“There are lots of billionaires today that could have done the project but because they have not released themselves for God to use they didn’t do it. A lot of people who have not noticed this place before will come and worship God as this place is now a cynosure of all eyes.”