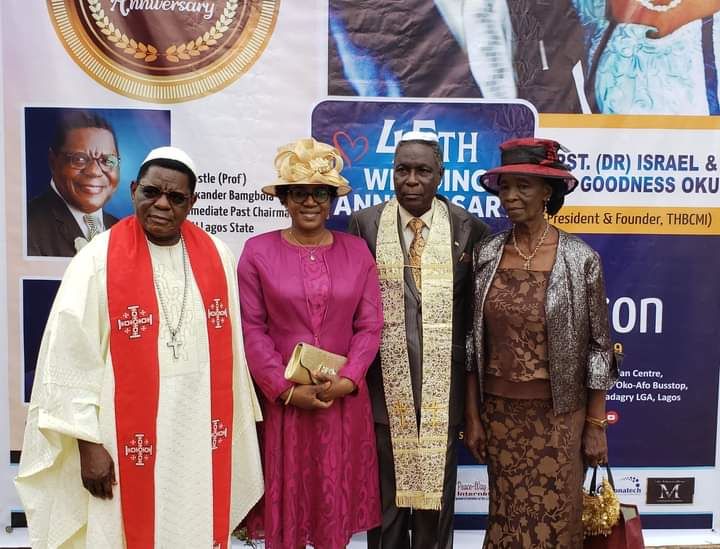 From Left, Apostle Bamgbola, wife, Apostle Oku and wife at the 45th wedding anniversary of the Okus

Former chairman of the Lagos chapter of the Christian Association of Nigeria, Apostle Alexander Bamgbola has appealed to Nigerians not to stop praying for their country.

He made the plea on July 3 at the 45th marriage anniversary of Apostle Israel Oku. He also assured that God will speak loud and clear soon.

Bamgbola who had a chat with reporters at the event said it was pointless making comments about the situation of Nigeria.

‘You only talk when you are sure that those in government will listen. But as it is, we just have to keep praying. I am certain that God will speak soon and everybody will listen,” he said.

The revered cleric who had played a critical role in Nigeria’s financial sector in the 80s and 90s assured that hope is not lost on Nigeria. “We can’t afford to lose hope. Now is the time to pray more. God will speak in a language that all will understand soon,” he assured. 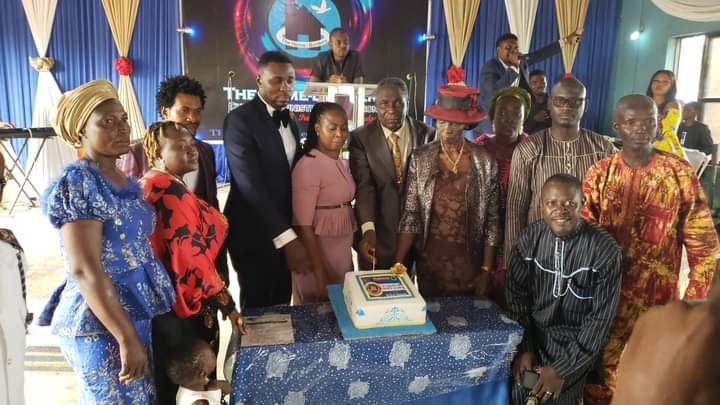 Earlier at the programme the ex-CAN chairman described Apostle Oku and his wife as wonderful couple.

He recalled how he met them many years when he assumed the role of their mentor and father in father.

Bamgbola said, “It is a deep thing to be given the responsibility of a spiritual father. I do not take the privilege for granted.”

Making copious reference to the Bible, the cleric said there was no better time for sober reflection than now.

“If there is any time the Lord should teach us to number our days it is now. There is a due season for everything. There is God’s own time. His own time is a perfect time. It is the best time,” he noted.

He observed that many always forget that God is the owner of time and season. “There is time for every activity under heaven. Timing is so important to God. He controls it absolutely. God has made everything beautiful in his time for Apostle Oku and his wife,” he said.

Bamgbola explained further that God is the one who specialises in making all things beautiful. “Each day means so much to God. If a day does not mean anything to you, then check your salvation,” he said.

The couple according to him “have demonstrated so much trust and faith in God. God has been gracious to them. There is so much love and warmth radiating from them. Their life is a testimony to the fact that if you wait on God and you wait righteously and holily, you will receive the promise.”

Apostle Oku who is also the founder of Home Builder International Ministry was full of appreciation to God for His love and how God sustained his marriage.

He thanked those who came to celebrate with him at the Oko Afo, off Badagry road venue of the event.

He noted that it was the love of God that brought them. “I can imagine the stress so many of you have to go through coming to this event. We all know how the road is.

“But you dared all odds and found your way here. I am truly grateful. Only God can reward you adequately.”

He recalled the early years of his marriage and how God saw him and his wife through various challenges and troubles.

“Today, we are all thanking God because he has remained faithful in our lives. He is the only one who deserves our praise,” he said. 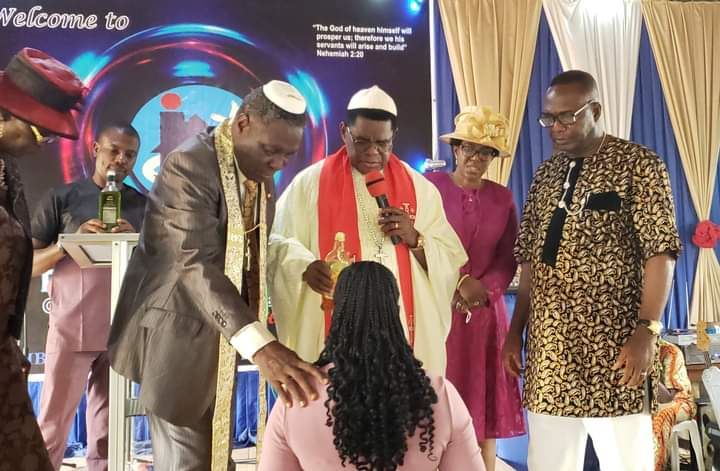 The event, which also marked the 21st anniversary of Home Builder Ministry International was graced by the Chairman of the Lagos chapter of Pentecostal Fellowship of Nigeria, Apostle Eyinnaya Okwuonu, and a host of other PFN leaders.

Apostle Okwuonu described the celebrants as great inspiration in the church. According to him, “their exemplary marital life is worth emulating by those coming behind.”

The event also witnessed the ordination of some members of the church into different ministerial positions.

A ministry, New life Mission based in Korea also donated free books to participants to celebrate the couple.

Encouraging words to all Nigerians from a man of Almighty God in Christ Jesus.Let’s be patient and see how it unfolds in Almighty God cosmic calendar.Indeed Almighty God is watching IJN.