Trending Now
Adeboye: Some women consider it privilege to sleep...
Despite challenges, God has been good to Nigerians...
Writers save lives, solve problems says Omotosho @...
Prince Harry’s book that hit 1.2m sales in...
Ex-Apola king, Idowu Animasawun celebrates 85th birthday with missions...
Nigeria can’t make progress if the Church is...
Peter Obi: I have not promised I will...
2023 elections and the imperative of divine timing
RCCG announces Prof. Aboaba’s passage says “He is...
The Paternoster Code: Debunking the age-long misconceptions about...
Home Features Ayoola Foods: When integrity and fair-play grow a brand

Ayoola Foods: When integrity and fair-play grow a brand

Ayoola Poundo Yam; the flagship product of Ayoola Foods has increasingly become a household name in Nigeria. It is produced in Nigeria by a Nigerian for Nigerians and indeed for the global community.

Folashade Memud said at the 2021 customer forum of the company which took place at the Sheraton Hotel on Saturday, February 5 that the new product enhances the health of the consumer.

“It helps in lowering blood pressure, helps in reducing cholesterol, and also fights scurvy diseases because of its vitamin C content. It is good for children and easy to digest. Ayoola Potato Flour is also filling. ” she said while urging distributors to spread the good news.

The great quality of products from the stable of Ayoola Foods notwithstanding, the company has over the years imbibed the culture of integrity and fair play to grow to its present status in the Nigerian market.

The two qualities have sustained it and have helped it to sail through the harsh economic weather in Nigeria. It is one of the few companies in Nigeria that places a premium on its customers.

The reward system is huge and sometimes can be overwhelming. One of the lead distributors, Nwachukwu Cosmos told Church Times at the 2021 customer forum that Ayoola Foods has been too nice and good to him.

Since he began selling the product about 15 years ago, he has enjoyed great returns and support from the company.

“The best relationship I have had with any company is the experience with Ayoola Foods. In fact, they are over-friendly to me. I am known as Ayoola everywhere I go. The product is the best in the market in the area of branded indigenous food”

Ironically, Ayoola products are not the only products Cosmos sells. But he says, his company has become synonymous with the products. Cosmos came third in the roll of distributors for the 2021 sales year.

His testimony is just one of the many testimonies by distributors. Every year, when they come for the customer forum, they are given a huge cash reward for their effort in selling the brand.

How I fell in love with Poundo Yam in Ireland 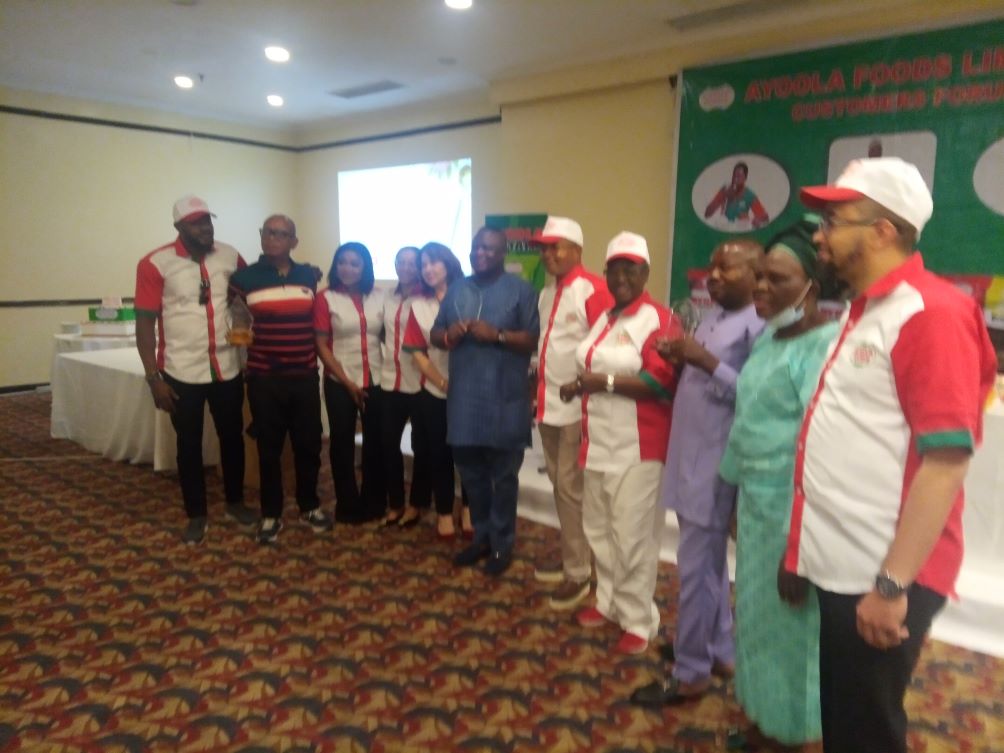 Deacon Paul Ossai who took the lead position in the list of distributors for 2021 shared how his love for Ayoola Poundo Yam turned him into a distributor of all the products from the stable of the company.

He said the first time he came in contact with the product was in Ireland where he lived for so many years.

“I have been eating Ayoola Poundo Yam when I was in Ireland. Somehow, I copied the number on the pack because I had fallen in love with it.

“When I came back to Nigeria I told my wife to look for the product, she said she was not aware of it. I said how come you don’t know about a product that is produced in Nigeria that sells a lot in Europe.”

The need to get the product made him call the number he had in his possession. That was about 17 years ago. He got in touch with the company and was told the product is only available in Lagos at that time. This was because the company had just started selling in Nigeria. For many years it was sold in Europe and the US

He was advised to come to Lagos if he wanted the product. That was when it occurred to him that he could be the distributor in Edo State where he lives.

He came to Lagos days after, met with the DMD, Mrs. Nathalia Olaye, and sealed the deal to be a distributor. That was how he began a rewarding romance with the organisation.

My journey to being 2021 number 1 distributor

It was tough at the beginning. “It took us a while to sell the first set of cartoons. In fact, the first person who bought the first cartoon from us is yet to pay me to date.

“That is to tell you that it was difficult to push then. I was going to give up. But my wife encouraged me to continue. We did. Today, we sell thousands of cartoons every year.”

In 2021, Ossai sold well over 40,000 cartoons to clinch the first position distributor. Several other distributors have interesting tales about their romance with the proudly Nigerian company.

The founder and CEO of the company, Engr, Segun Olaye reiterated his commitment to distributors. “The more you sell, the more reward you get from us,” he said at the customer forum. While thanking God for the year 2021, he expressed optimism that “the year 2022 will be better by God’s grace. The Lord who helped us in 2021, will help us in the present year.” 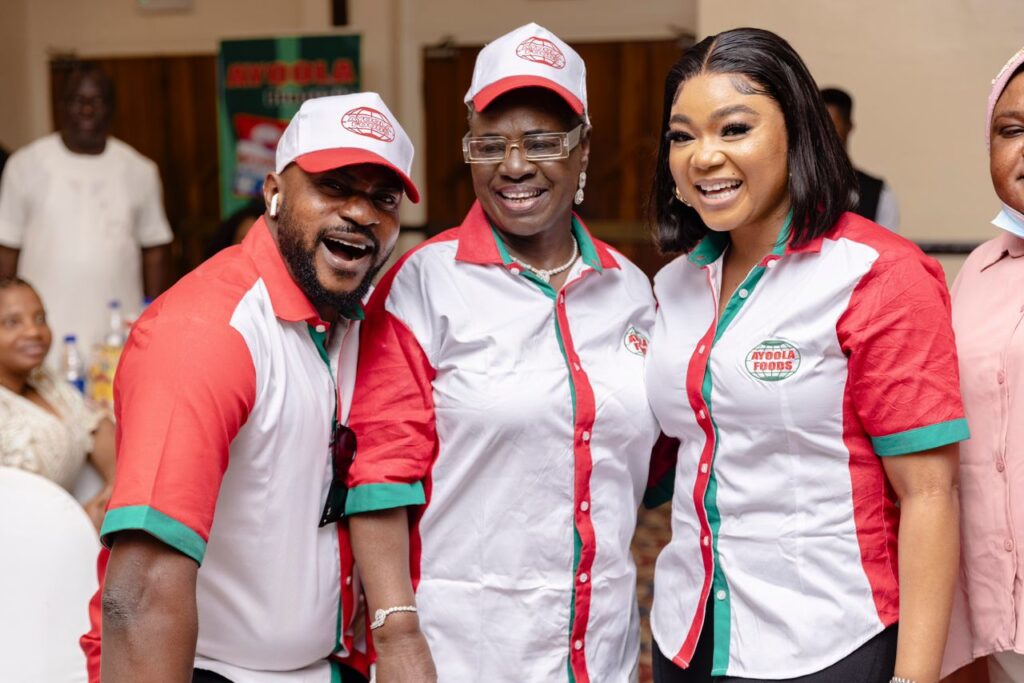 Odunlade, Philips, and Okonkwo at the customers’ forum

Beyond the distributors, Olaye has an uncanny relationship with his staff. Their welfare is a priority to him. At the 2021 forum, he shocked some of his old employees who have long left the company.

He invited two of them and rewarded them with cash gifts totaling N1million for the outstanding roles they played while in the organisation.

The duo: Kemi Ogundiya and Lolade Oduwole had left the organistion more than 10 years ago and had no inkling they could be called for such reward.

Olaye told the story of how Ogundiya laboured tirelessly to market the product in the early years of the company in Nigeria.

The two staff were overwhelmed as they prayed effusively for him. They described the gesture as unprecedented.

For Olaye, integrity is key. He affirmed that loyal people deserve to be celebrated and rewarded. That was what he did for the old staff and indeed for the staff of his organisation. They enjoy top-notch welfare. 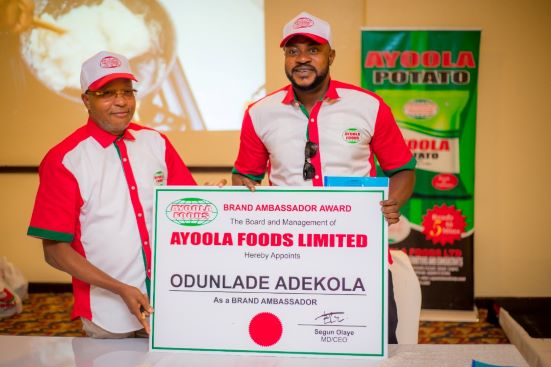 Engr. Olaye and Odunlade Adekola after signing the 2022 contract as brand ambassador

In the branding of the organisation, Olaye is also careful to choose brand ambassadors who don’t have moral baggage, at least to his knowledge.

The ambassadors are Mrs. Idowu Philips known as Mama Rainbow, Odunlade Adekola, Rachael Okonkwo, and Ali Nuhu. All the brand ambassadors were strategically chosen to represent all the major regions of the country.

The 2022 customer forum turned out to be a carnival of sorts. Dancers from the House of Dance enlivened the event with acrobatic dance steps that resonate with the three major tribes in Nigeria. 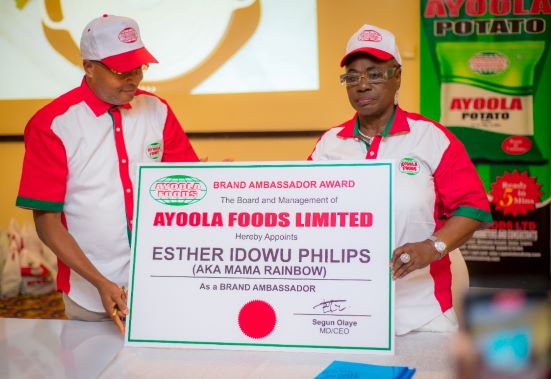 Contracts with the brand ambassadors for the year 2022 were also signed at the event which attracted close to 100 distributors.

Indeed, Ayoola Foods has distinguished itself as a proudly Nigerian brand