Trending Now
Adeboye: Some women consider it privilege to sleep...
Despite challenges, God has been good to Nigerians...
Writers save lives, solve problems says Omotosho @...
Prince Harry’s book that hit 1.2m sales in...
Ex-Apola king, Idowu Animasawun celebrates 85th birthday with missions...
Nigeria can’t make progress if the Church is...
Peter Obi: I have not promised I will...
2023 elections and the imperative of divine timing
RCCG announces Prof. Aboaba’s passage says “He is...
The Paternoster Code: Debunking the age-long misconceptions about...
Home Features The Paternoster Code: Debunking the age-long misconceptions about prayer 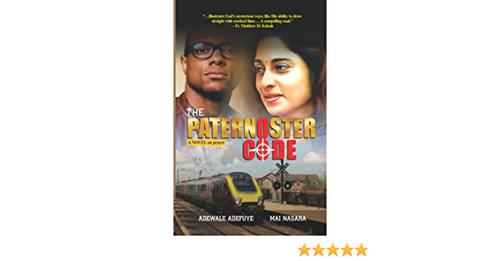 The Paternoster Code: Debunking the age-long misconceptions about prayer

A careful study of  The Paternoster Code, written by Adewale Adefuye and Mai Nasara, brings the reader into a world of revelation and knowledge. But it is essentially a novel on prayer.

Set in the context of a dialogue between two characters on a journey; the novel also answers a number of intriguing questions about life. Beyond this, however, is the ingenuity of the authors.

The book opens with an array of endorsements by eminent personalities cutting across race and creed.

Opeyemi Onifade says the book is too deep to be rushed. “Yet, I needed to pause and think all along the way…”

Denis Kitchen, a Colson Fellow, and attorney at law in New York, United States quips, “I don’t read much fiction, but I find this narrative fascinating.

“The dialogue is very engaging and I am learning a lot. My overall impression is 5 stars. Now I am trying to wrap my head around the notion of the unjust judge being my human soul. Very intriguing.”

Bishop of the Catholic Diocese of Sokoto and erudite public speaker, Hassan Mathew Kukah describes the book as illustrating “God’s mysterious ways, like his ability to draw straight with crooked lines.

“It calls attention to all to appreciate that God is everywhere and meets us irrespective of time, space or agency. A compelling read.”

There are about 20 other endorsements including that of the president of International Church Growth Ministry, Dr. Francis Bola Akin-John who says in sum  that “…if you desire an effective prayer life, you need to read this book”

A journey through the book confirms the myriad of endorsements. It is indeed a great novel that will be very much around for decades; still making impact on the minds of those who encounter it.

Pater Noster or sometimes paternoster is the Latin phrase that simply means Our Father. it could also mean the Lord’s prayer.  It is a word commonly used in the Catholic setting since prayers are offered in Latin. The authors employ the term to drive home the point of the primacy of the father in the place of prayer.

Within the novel are two characters:  Gaius and Mariam.  Gaius first introduces himself to Mariam. He appears to be a character with a vast understanding of the scriptures. He tells Mariam for a start that the name Gaius means rejoice.

They both engage in a rather dramatic stretch of dialogue;  Gaius says of Mariam, “You know more than you say, and I say more than I know”.

Mariam retorts and turns the statement around, saying, “I say more than I know and you know more than you say”.  Gaius is able to trace that statement to a book titled, Lonesome Dove. The import of that statement is however that the duo have a teachable spirit. This is strategic in the sense that it set the pace for the learning sessions in the novel.

As the volume progresses, the two characters throw up issues and seek to interrogate them. They both unleash on the reader some useful insights in their deliveries.

Apparently, Mariam a widow whose husband was killed by some religious bigots is reading the story of the parable of the unjust judge and the widow as told by Jesus. She is doing that in the course of the train ride which spans 11 hours.

Gaius who sits by her side comes to interrupt her flow with the question: Do you understand what you are reading? Any discerning reader will immediately recall Philip and the Ethiopian Eunuch in the Acts of Apostles.

That question however set the pace for the long winding back and forth that brought to the fore some other eternal truths.

The law and grace

As an aside, the duo make a snide remark about the anti-blasphemy laws in some countries called Riddah.

They drive home the need for humanity to get rid of people who can’t tolerate other people’s religion. They are able to situate religious intolerance as a generic phenomenon.

But the main plot of the novel is the unraveling of the parable of the widow and the unjust judge. The authors are also able to identify a striking semblance between the parable with the story of David and Goliath.

Before the parallels in these two stories, Gaius in his delivery also draws some connection between the day of Pentecost and the day the law was given to Moses.

He notes for instance that on the day the law was given to Moses, 3000 people died.

“But when the holy spirit was poured out on the day of Pentecost in the Upper Room, 3000 people were saved. They moved from death to life. The letter kills, but the spirit gives life,” he notes.

About prayer in the place of fellowship

While still having the main plot in view, the authors employ the element of suspense to its zenith.  They keep the reader on, while also churning out other exciting information to fill in the space through the two characters.

The exchange between Gaius and Mariam addresses the issue of repetitive prayers, the undue drama of shouting and screaming in the place of prayer as if God is deaf.

The novel also contains an exegesis on the prayer of Jesus in John 17 as told by Gaius who features as the protagonist.

Gaius notes that Jesus mentioned father six times in that prayer. This is to show the level of his intimacy with God in the place of prayer which many don’t cultivate.

The novel punctures the age-long belief that prayer is like a court appearance where people make pleas before God, with Satan standing as the accuser.

It puts Satan in proper context; while also debunking the notion that Satan is always before God accusing the believers.

The authors assert in the novel that Satan’s appearance before God as recorded in the book of Job has been overtaken by scriptures that show that he has fallen down from heaven.

Gaius quotes some scriptures to buttress his point stressing that, “Satan’s job as the accuser of the brethren requires access to God’s presence. Once his access was revoked, he lost his role as a prosecuting attorney”

The novel also addresses the question of why there is evil in the world if God is a good God. Quoting CS Lewis, Gaius says, “If a thing is free to be good, it is also free to be bad..

“And free will is what has made evil possible. It is also the thing that makes possible any love or goodness or joy worth having.”

The unjust judge and the widow

Back to the parable of the unjust judge and the widow, the novel notes that it is the most misunderstood parable of the Bible because Jesus did not provide clarification on it unlike some of his other parables.

Gaius believes it is wrong to slap the ‘label of the unjust judge on God the father. That doesn’t begin to make sense”

He then goes on to dissect the parable pointing out its key elements like the unjust judge, the widow, the adversary, and a certain city.

He stresses however that the explanation given concerning the adversary is the only point of agreement for all commentators of the Bible.

Unlike what many think, the unjust judge is not God, the widow is not the believer.

This is an aspect of the novel readers will have to painstakingly digest so as not lose track of the flow of the novel.

The book drives home the point that the reason Jesus gave the parable is that men ought always to pray.

Gaius then goes on to explain that the unregenerated human soul is the unjust judge that is described in the parable as being without fear of God or regard for man.

The body and the soul from the novel’s explanation are always in conflict.

“It’s whichever of the spirit or body, physical or spiritual that I yield my mind to and take sides with..gets to win in the affairs of life”

Gaius who is the principal character in the novel further explains, “…for as long as the mind is not in tune with the spirit, decisions, and judgments in the situations of life remain out of order.

“Folks will not get the results they so dearly crave. And this keeps them crying day and night. But God is left with no choice than to bear long  or put up with them.”

The explanation of a certain city also goes a long way to puncture the age-long interpretation of the parable. Scriptures as used in the novel show a certain city could also mean a person. It is even clearer when the Bible describes a Christian as a city that is set on a hill that cannot be hidden.

Perhaps the high point of the novel is the uncanny way the story of David and Goliath is told to resonate with that of the parable of the widow and the unjust judge.

Readers will need to check that out in the book.

On the whole, the novel is a refreshing insight into the art of prayer, a consortium of theological terms, and a historical recourse.

The language employed is both simple and deep. It is an engaging treatise that will do the reader a lot of good. It is indeed not just a novel. It is an experience.

But then, a reader who encounters the book which runs over about 350 pages, will have to read it painstakingly to get its meat and essence. And it is best read with an open heart.

The book is available at

RCCG announces Prof. Aboaba’s passage says “He is instrumental to many laudable projects in the mission”