Trending Now
A “widow’s” lamentation and lessons for RCCG, others...
God’s word: A case for non-English speakers in...
Adeboye: Some women consider it privilege to sleep...
Despite challenges, God has been good to Nigerians...
Writers save lives, solve problems says Omotosho @...
Prince Harry’s book that hit 1.2m sales in...
Ex-Apola king, Idowu Animasawun celebrates 85th birthday with missions...
Nigeria can’t make progress if the Church is...
Peter Obi: I have not promised I will...
2023 elections and the imperative of divine timing
Home News Adeboye’s right-hand man, Prof Aboaba dies 47 days to his 90th birthday 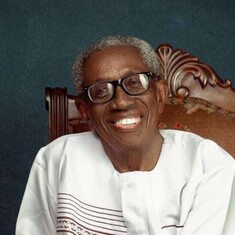 Prof. Fola Aboaba, one of the closest persons to the General Overseer of the Redeemed Christian Church of God, Pastor Enoch Adeboye has passed on.

He died in Lagos on Saturday, January 21 about 47 days to his 90th birthday after a brief illness. A report gleaned from www.forevermissed.com  informs that he was born on March 8 1933.

Professor Aboaba was in a circle of three friends very close to Pastor Adeboye. The others are Mr. Simeon Olakunrin (SAN) and Elder Felix Ohiwerei

Until his death, Prof. Aboaba officiated regularly at special Holy Ghost Nights of the RCCG. He played the role of introducing Pastor Adeboye to the podium to minister on such occasions.  He also used to sing special songs to celebrate the birthday of Pastor Adeboye.

He was the founding Pro-Chancellor and Chairman of the Governing Council of the Redeemer’s University.

A professor Emeritus of Agricultural Engineering Aboaba was a member Board of Trustees of the RCCG and also Chairman of the Technical Advisory Board and Lands Committee of the Church.

Prof Aboaba was also one of the founding fathers of the National Prayer Movement.  The Gneral Secretary of the body, Mr  Gbemiga Olakunle recalls Aboaba’s activities in the group.

He told Church Times that he supported the group and on many occasions hosted its meetings.

Already tributes are pouring in. One of the respondents who perhaps is Aboaba’s grandchild, Rereoluwa Akintola wrote on the wall of www.Forevermissed.com of his earliest memories of the late professor.

He wrote, “One of my earliest memories of Grandpa was when I told him I had seen him at the Alake’s palace when I went on a school excursion, but couldn’t get his attention.

“As I recounted that to him, he told little me that I should have dragged him by the shirt to catch his attention. Little me, drag a whole grandpa by the shirt?! I couldn’t fathom how such a distinguished man could be so down-to-earth”

Akintola also described him as a great family man recalling how he used to interact with his wife who reportedly died in 2018 at age 73.

He says of Prof Aboaba that, “Your laughter will ring loud, and light up heaven so much, everyone there will know there’s a new resident.”

Another respondent, Folorunso Orimoloye wrote, “Prof. Aboaba will be greatly missed. He loved children and gave them candy every Sunday. My children remain ever grateful to you for being part of their world. The sweets you gave made them embrace your beautiful virtues of respect and service to others.

“You had an impact on everyone, both near and far. Oh, daddy Aboaba!, the world would not get to listen to your beautiful voice on various occasions again. But I know you are singing for the host of heaven right now! We shall meet again in the presence of our Lord, where we will get to listen to your bass-enriched tunes. Sleep well, and sleep on our daddy of goodwill.”

CEO of Soyinka Centre counsels journalists on how to excel

The Paternoster Code: Debunking the age-long misconceptions about prayer