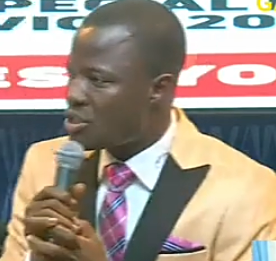 A youth evangelist with the Redeemed Christian  Church of God, Seun Adekunle preached a scathing message at the September Holy Ghost

He called believers to repentance if they truly desire to be fruitful.

His message drew the applause of many. It also engendered generous remarks from Pastor Enoch Adeboye and his wife Folu Adeboye who led a prayer session for Nigeria afterward.

Pastor Adeboye’s wife declared before leading the congregation in prayers that the evangelist had hit the nail on its head.

She said, “We can’t continue in sin and ask that grace will abound.”

In the message which lasted for about 20 minutes, Adekunle said when God commanded that we be fruitful, He is talking to everybody.

God is eager to make us fruitful

The young preacher cited the example of Jesus who did not tolerate un-fruitfulness. He urged all not to associate themselves with unfruitful works of darkness.

“Fruitfulness is the work of God on man to increase and expand. You are a soil and right inside you there is a seed of God that must germinate and be fruitful.”

We are the cause of our calamities

God according to him is glorified when the lives of people are fruitful. He however noted that the same God who blessed the first man and asked him to be fruitful was the same God who cursed him when he veered off His instruction.

“A lot of people are coming to the church and troubling the pastor and it looks as if it is the church that has trouble. It is not God that is behind our calamities but we are the one. Instead of pressing forward in the service of God, some are already content. Some are envious and involved in competitive jealousy,” he noted.

The young pastor who is the evangelist in charge of Youth Region 1 and 20 of the church said it is not possible to live in sin and expect to be fruitful.

Adekunle: So much worldliness in Church

Adekunle wondered why many are living as if heaven and hell are no longer real. “All kinds of sacrilege have crept into the church. There is so much worldliness. Many people are in church today but only a few are in Christ. We lift our hands in worship and say holy hands, but God is seeing filthy hands. There is envy and bitterness in our lives. If some pastors dream that they ate with fellow pastors when they wake up they will start casting out devils. We no longer trust ourselves.

He decried the state of insecurity in the country noting, “To travel from one state to another now, you have to recite Psalm 23. There is killing everywhere.  People that should be on fire for God winning souls in the villages are deep in sin and wickedness.” He said.

While insisting that only repentance can guarantee the fruitfulness of the believer, he expressed worry over the incessant killings and corruption in the land. He noted that it is only in Nigeria that snake swallows money in millions while also taking a swipe at corrupt leaders.

There is a reward

His message was followed by that of Pastor Sola Balogun who also stretched the message of fruitfulness saying it is God’s will for all believers to be fruitful in all areas of life.

She urged Christians not to ignore the role of the enemies adding however that the devil’s suggestions should not in any way deter the Christians from advancing in life.

Nigeria too big for one man to rule-Prophet Solomon Ajao