Trending Now
A “widow’s” lamentation and lessons for RCCG, others...
God’s word: A case for non-English speakers in...
Adeboye: Some women consider it privilege to sleep...
Despite challenges, God has been good to Nigerians...
Writers save lives, solve problems says Omotosho @...
Prince Harry’s book that hit 1.2m sales in...
Ex-Apola king, Idowu Animasawun celebrates 85th birthday with missions...
Nigeria can’t make progress if the Church is...
Peter Obi: I have not promised I will...
2023 elections and the imperative of divine timing
Home News Poju Oyemade: Why I deleted tweet perceived to be against Peter Obi 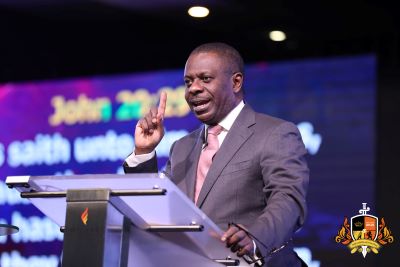 Poju Oyemade: Why I deleted tweet perceived to be against Peter Obi

Founder of The Covenant Nation (formerly the Covenant Christian Center), Pastor Poju Oyemade, on Saturday August 27 explained why he had to pull down the tweet that was perceived to be against the Labour Party Presidential Candidate, Mr. Peter Obi.

Pastor Oyemade had in a tweet on July 1 advised Nigerian youths not to “waste their enthusiasm on poorly planned projects“.

The tweet reads in full, “Faith is not just blind belief or hoping for a miracle. Faith sees. Faith has her eyes opened and possesses the evidence upon which it builds its belief.

“Faith prepares long, sometimes for years just as Joseph did for the years of famine. Faith counts the cost before embarking.

“Without having real evidence upon which you are acting nor preparation for the task, recognising real obstacles that lie ahead, and making concrete plans, one is just being delusional about the outcome. The enthusiasm of the youth must not be wasted on poorly planned projects.

“Noah spent months/years planning for the flood and he was operating in faith. Jesus said no man goes to battle without taking stock first nor lays the foundation of a tower without counting the cost first lest he will be mocked. Our faith is intelligent it doesn’t live in denial.”

Oyemade during the live radio chat however said he had to pull down the tweet because Nigerian youths were not ready for conversation on how they can drive change in the country.

The deleted tweet stirred controversy. It was interpreted by some online folks as a biased political comment. Some saw it as an attempt to portray  Obi’s supporters as unprepared for the 2023 general election.

Giving further insight on the tweet, Oyemade who was also the guest speaker at YDI annual Favour Conference said he was only trying to make young people learn from history.

He recalled how he made a similar comment during the Endsars protest which was equally misconstrued.

Oyemade said, “During the Endsars, just the night of the endsars, I made a tweet.  In that tweet, I told the young people what happened in 1968 because everything that happened in life, people are not doing it for the first time.

“The only way you can be effective is to go back to find a historical precedent to it. Many young people think they are the first to do some things. So when they were doing EndSars, I quoted what happened in 1968.”

In the 1968 example, Oyemade had laid out the three options the mentor of some young people gave them in the US when their candidate did not get the Democratic Party ticket.

Their mentor said, “number one, you can leave the country, number two you can burn down the systems and start rioting, number three you can go and become delegates in the political party so you can be able to appoint your candidate. That was what I put out and there was anger. I felt the people were not ready for what I put out then.”

He however noted that the advice he gave then was what many young people are now trying to do by getting involved in the political process.

Oyemade however noted that politics is a very deep thing. “Nigeria is a complex country. 65 percent of those who vote are in rural areas. The way and manner in which they vote is completely different from the way educated people vote.”

To avert the disappointment young people faced during the EndSARS, Oyemade said he had to advise them again. He however noted that many are not ready for the conversation and had to delete his tweet.

Talking further on Labour Party candidate,  the Covenant Nation pastor said he was never against Obi adding, “He is the only candidate of all four major contenders that I have had a one-on-one discussion with. I have never sat with the other candidates.”

Peter Obi had been a guest speaker on three different occasions at The Platform; the October 1 lecture organised by the Covenant Nation.

Still talking about the deleted tweet, he said, “ I advised them again and I had to delete it. It’s only Peter Obi that I know personally. I have never sat with others. If people are not going to see it the way I want them to see it, it’s better I remove it.”

Oyemade also spoke on his relationship with the American preacher, Pastor Creflo Dollar, and Dollar’s new teaching on tithe. Dollar had said in his new teaching that tithing is of the old testament and not for new covenant believers. He told his congregation to throw away his books and tapes on tithing, saying that he got the subject wrong.

On his mentor in ministry, he said Ibadan-based, Pastor Olubi Johnson, played a critical role in mentoring him as a young believer. He however added that Bishop Oyedepo has also been his mentor over the years.

He said despite Oyedepo’s schedule, he has been gracious to find time to see him whenever he wants to

The interviewer, Pastor Jesimiel Ogbe is the founder of Young Disciples International. He has been a youth pastor since 1986. He is also the founder and Senior Pastor of Great House Mandate.

Pastor Ogbe had taken note of the humble lifestyle of Oyemade during the chat.

He said Oyemade was not the typical Nigerian big man who goes about with an entourage. He was the only one who came to the conference from his church. Apparently, there was no aide that accompanied him to the event.

This man did not look like a mentee of Bishop Oyedepo simply because of his unprogressive and reactionary outlook, especially as concerned the issues in Nigeria. According to him ”The enthusiasm of the youth must not be wasted on poorly planned projects.” This is the same thing some idiots in France said about Emmanuel Macron when at 38 years old he contested the French presidency. ”Macron has no programs…he has no proposals” they all said, yet he went on to win the poll and began to transform France.

No wonder no one listened to him and his ”1968 example” during the ENDSARs protest. Imagine if the youths have followed his unprogressive advice at the time, the idiots in government would today have continued their unbridled barbaric treatment of Nigerians as usual since they would have rest assured that no one can challenge them regarding governance and the affairs of the nation.

Incidentally, there is nowhere that Creflo Dollar said that ”tithing is of the old testament and not for new covenant believers.” Or that ”he told his congregation to throw away his books and tapes on tithing, saying that he got the subject wrong.”

What Dollar said during his sermon was asking that his congregations forgive him for the way he had taught on tithing, especially where he has presented it entwined with fear. According to him, he stated that the issue of tithing and giving should be done in love whereby Christians give because they are motivated by their love for God and not because of the fear of what a pastor tells them will happen to them if they don’t give.
Accordingly he told them that they should throw away his books and tapes where he has ever preached the subject of tighthing mixed with the fear of not tithing’ He did not say that they should ”throw away his books and tapes on tithing”!