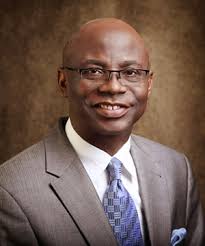 Founder of The Citadel Global Community Church, Pastor Tunde Bakare, has gone down memory lane recounting his conversion from Islam to Christianity.

He also recalled how he was persecuted for his faith and how he survived during the early years of becoming born again.

The Lawyer turned pastor stated that he was born to a strong Muslim family. He said his grandfather was the first Chief Imam of  Sodeke, Abeokuta while his father, Chief Adekunle Bakare was also committed to Islam.

He said he began learning the Quran when he was about 4 and graduated from the koranic recitation in 1967 at the age of 13. He said he could still recite the Islamic prayers from the start to the finish.

Bakare who has since put in about 32 years as pastor said it pleased God to bring him to Christ.

Giving a rundown of how he met Jesus at the age of 20,  he said, “I had a friend who was a Muslim but had become born again. I was a photographer then. The friend wanted to do baptism and he wanted me to come and take pictures of the baptismal service. That was how I went to church. I did not go to church because I had a problem. It was while in the church and the preacher was preaching on the topic,  “Jesus the light of the world”, that I recalled a vision that God had showed me about 10 years ago. That was how I screamed and said in the church, I have seen the light. I have seen the light.”

That was the beginning of his sojourn in the Christian faith. He surrendered his life to Jesus that day almost immediately joined the church.

Bakare said he has been asking God where he was taking him to since his conversion.

On getting home, he did not declare his conversion to his parents and his elder brother he was living with. Rather, he went to Church secretly to learn more about his new found faith.

That was the beginning of his persecution.

“I was asked to pack my things and leave the house. That night I slept at the filling station at Alagomeji in Lagos. I was beaten by the rain. But God had mercy on me. I went to the church the following day. I was given a small place where I hibernated.”

Ironically, all those who opposed him then had become Christians. He said his mother who had been to Mecca also became a Christian before her death.

While recounting that he went through a lot of hard times, he said he had no job when he left his elder brother’s house. That made him turn to the laundry business.

It was while washing clothes in one of his clients’ house that he began to sing a song in English.  “The man was shocked when he heard I was singing in English. Out of curiosity, he asked, if I could speak English. I said, yes, that in fact, I had an A in English in my WAEC. That was how he helped me secure a job in First Bank. So working in First Bank was a big relief. I began to have some money. I got a room to myself. And the first thing I laid on the floor of the room was a newspaper somebody gave me.”

It was money he got from working with First Bank that he used to enroll in a “continuous education” centre to do Advanced Level GCE. That was where he was taught by Prof. Jide Osuntokun for nine months. He wrote GCE A/Levels,  came out with good grades, and was subsequently admitted to study law at the University of Lagos.

Read also: My conversion from Islam, experience with Adeboye, Kumuyi, Oyedepo, and Ashimolowohttps://churchtimesnigeria.net/bakare-kumuyi-adeboye-oyedepo/

He said it was the money he saved from working at the First Bank that he used to sponsor himself in the first two years at the university. But during the regime of the then military head of state, Olusegun Obasanjo things became difficult leading to the Ali Must God protest across university campuses.

While at the University of Lagos, Bakare said he took to washing plates at the Oasis Hotel close to the UNILAG to make some more money and also worked with the Gani Fawehinmi chambers.

Bakare: I was prosperous as a lawyer

He said he never knew he would become a pastor because he had become so prosperous through his legal practice after he left the university. “God allowed me to prosper at the speed of light while practicing law. I was traveling abroad and had great exposure. It was while practicing that God called me to the ministry,” he said.

He recalled that his wife was taken aback when he shared with her that he was going to the ministry. “My wife said, he did not marry a pastor, that he married a lawyer and was wondering how we were going to survive. The children were already coming. I told her that God who provided for me as a lawyer will also provide for me as a pastor. My mother did not find it funny. She said, in the whole village, they used to call her lawyer’s mother. She was now asking what will they now be calling her. I told her they would call her the mother of a pastor because I had already accepted the call to ministry.”

While expressing gratitude to God for the years he has spent in the ministry, he said, “God has not allowed me to be put to shame since I embraced the gospel.”

If you talk against miracle money, you are insulting God-Apostle Suleman…threatens bloggers with lawsuit