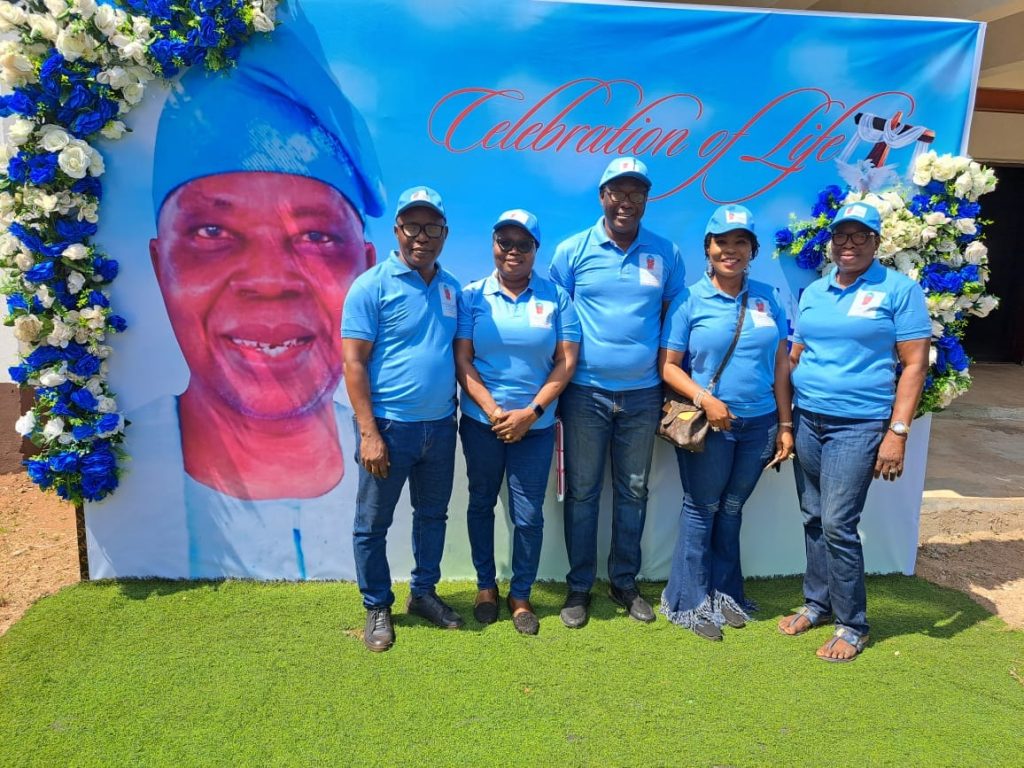 Otunba Adebanjo, an architect of note and philanthropist died on October 4, 2022.

He was the first Chairman of the Governing Board of the community school and was reputed to have impacted the students of the school greatly during his lifetime.

He gave many students scholarships and invested greatly in the infrastructure of the school. This was done in conjunction with some other indigenes of the town. 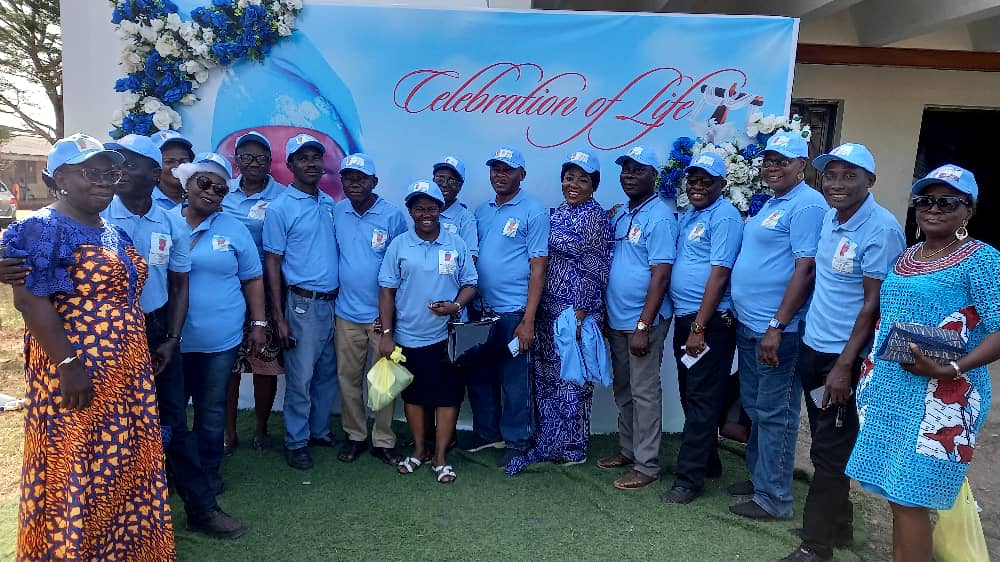 Members of the 1980 set (First Set) of the school after a programme to honour the late Chief Adebanjo at Ijebu Ife Community Grammar School on Friday, November 25.

The funeral rites for the late Adebanjo started with a commendation service on Friday, November 25 at the Shepherdhill Baptist Church, Lagos.

Old students association of the school led by its president, Mr. Adeniyi Àfolabi also paid homage to the late Architect at the Olajide Adebanjo hall inside the school compound at Ijebu Ife.

Hundreds of old students of the school traveled from all over the country to grace the occasion. A few came from outside Nigeria. Those who could not come linked up with the event online.

Several other dignitaries including 11 royal fathers were represented at the Baptist Church venue of the burial service.

The event invariably turned out to be a carnival and reunion for all the old students.

The first set of students of the school passed out in 1980. Many of them had become grandparents, making impact globally. 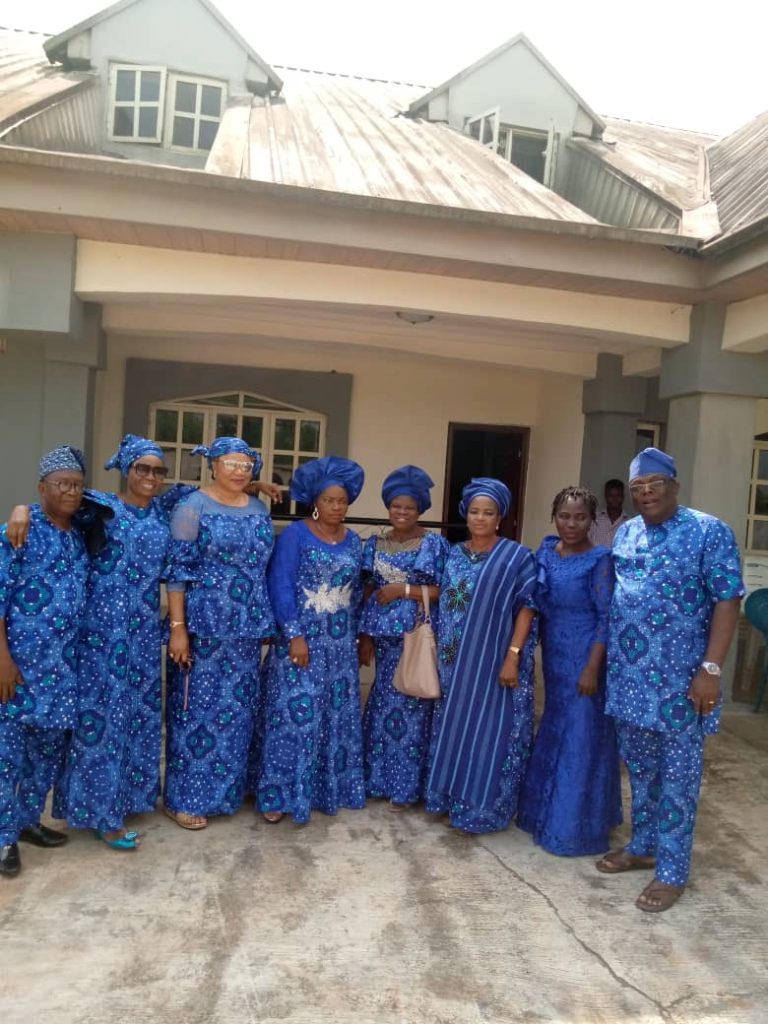 The school has produced outstanding individuals from all walks of life including the present governor of Lagos State, Mr. Babajide Sanwoolu.

In his commendation letter to the family, Sanwoolu described the late Chief Adebanjo as a foremost and highly respected philanthropist, industrialist, and architect who was deeply passionate about universal education and access.”

He said far back in 1975 when Chief Adebanjo came together with “a visionary set of like-minded individuals to establish the school, Otunba Adebanjo could have easily set up a for-profit school with his resources. But he chose to sow these resources, at that time into establishing what is today, a legacy school project that has birthed thousands of eminent Nigerians doing wonderfully well in their chosen fields of endeavours.”

He noted that Adebanjo’s gesture has become a leading source of inspiration and a role model to many generations of impressionable students who would pass through the school.

Sanwoolu who was part of the 1981 set of the school, said in his closing thought, “Our memories of Otunba Adebanjo will remain evergreen because he lived a life worthy of adulation with indelible footprints that are worthy of emulation.”

At the Church service, the president of the old students association, Mr. Adeniyi described the late architect as a man who built an army of committed and dedicated individuals who will forever remember his good deeds and service to humanity. 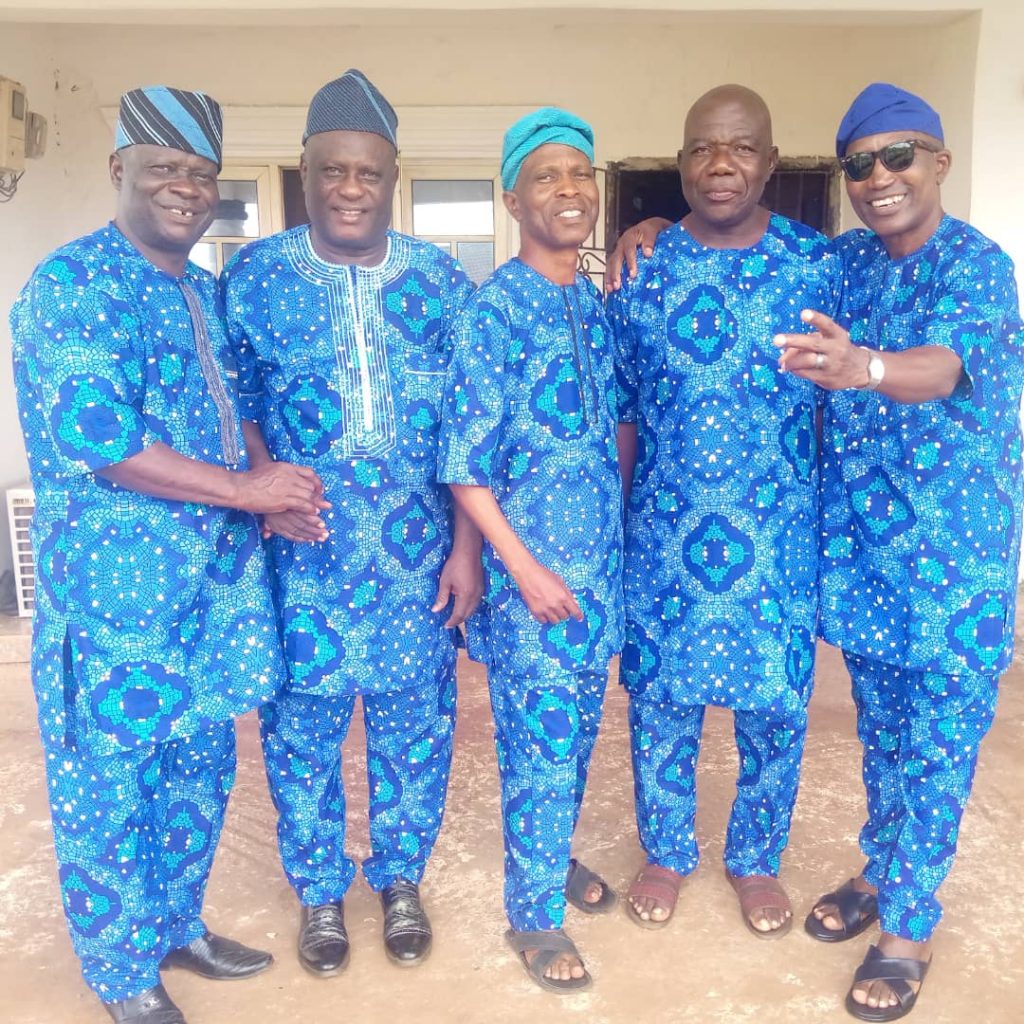 Adeniyi was part of the first set of the school. He later got admitted to Kings College, Lagos for his Advanced Level programme. He ended up at the University of London where he studied Mechanical Engineering and came out with a first class.

He said, “Despite going to “Bush” school according to dictates of Kings College, Lagos, I was the best graduating A Levels Student. I also won Shell scholarship and studied engineering at the University of London and graduated with First Class honour in 1985.”

Adeniyi gave a graphic account of how his alma mater impacted him and several of the old students.

Adeniyi traced the successes of the students to the sacrifices and love of Otunba Adebanjo. He said he ensured students got the best teachers including expatriates from outside the country. 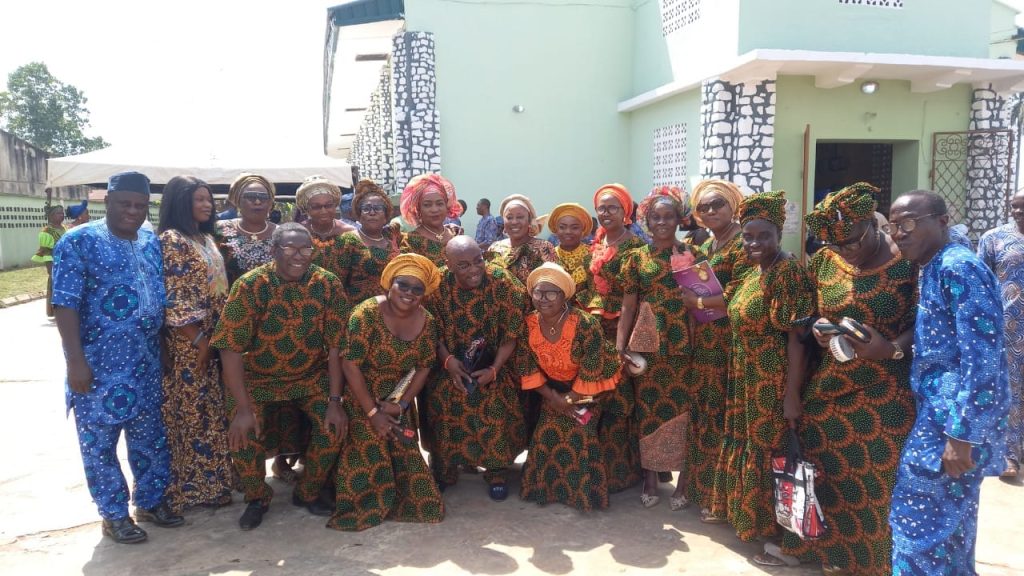 Some of the Old Students after the Church Service on Saturday, November 26 mostly those from the 1982 set

The daughter of the late Philanthropist, Mrs. Toyin Olaiya said the greatest legacy her father left is his Christian heritage.

She said of her father, “You instilled in us godly values and good morals and taught us to embrace humility and respect for others…

“You brought us up in the way of the Lord. You raised us in the Christian faith and together with mummy, you made church attendance a vital part of our family life.”

She recalled that her father was a generous giver who took time to invest in the lives of many people.

Some of 1984 set at the event after the Church Service

The preacher at the service, Rev Dr, Israel Kristilere described the late icon as a blessing to humanity. “He was a great man,” he said.

Kristilere who preached on the topic, The spider’s Web said, “We are celebrating a life spent to serve humanity. One day we will leave all that we have achieved behind. Events like this are meant to draw us closer to God. No matter how wealthy we are our life is like that of the spider.

“Our days are a shadow. A Spider has 8 legs and 8 eyes. That is why it can sense dangers from all angles. It’s very active. It is full of wisdom. It is independent. It is self-sufficient. It is full of strange hopes.

“There is the imaginary exit for all that the spider builds. This is false hope and absolute foolishness. Its legs are many but hold nothing. The spider thinks its life is secure. But if a man wants to deal with the spider you don’t need a cutlass. All you need is a broom and the whole house the spider built will perish.”

Some 1984 set of Ijebu Ife Community Grammar School with their former Principal (Mr. Olusegun Adebanjo) (5th from left) after the Church Service

He said the beauty of the life of Otunba Adebanjo is that in spite of all his achievements, he knew Jesus. “He did not labour in vain.”

He urged Nigerians not to place hope in any of the presidential candidates in the 2023 elections adding that “you don’t know a man until he gets what he wants.”

Kristilere who is of the Shepherdhill Baptist Church, Lagos said  “When you have Jesus as your hope death will be a blessing, not a curse, a gain not a loss. We are celebrating this man today because he lived for Jesus.” 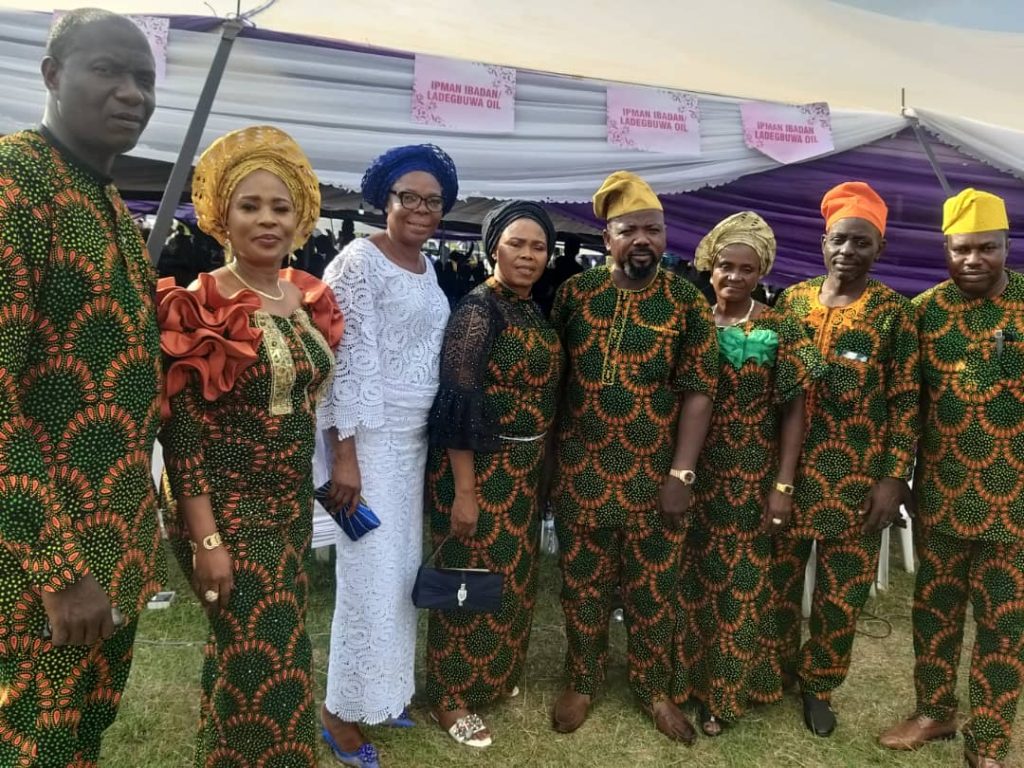 In a tribute, Sheperdhill Baptist Church assured that Adebanjo’s contribution to the church will never be forgotten. The Oke Ife, Ijebu Ife parish of the church described the late Adebanjo as a nation builder who was generous and very accommodating of all kinds of people.

The service which lasted for about three and half hours also had in attendance the Chairman of the Ijebu East Local Government, Hon Wale Adedayo.  Several pastors, about 200 of the old Students of the school, and former staff of the school were also at the event. They had the opportunity of meeting some of the students they trained several years ago.

Adedayo recalled the glorious and impact-driven life of Otunba Adebanjo He noted that Nigeria would have been a better place if wealthy Nigerians think of impacting people around them. He said people in the class of Otunba Adebanjo are very few in the country. 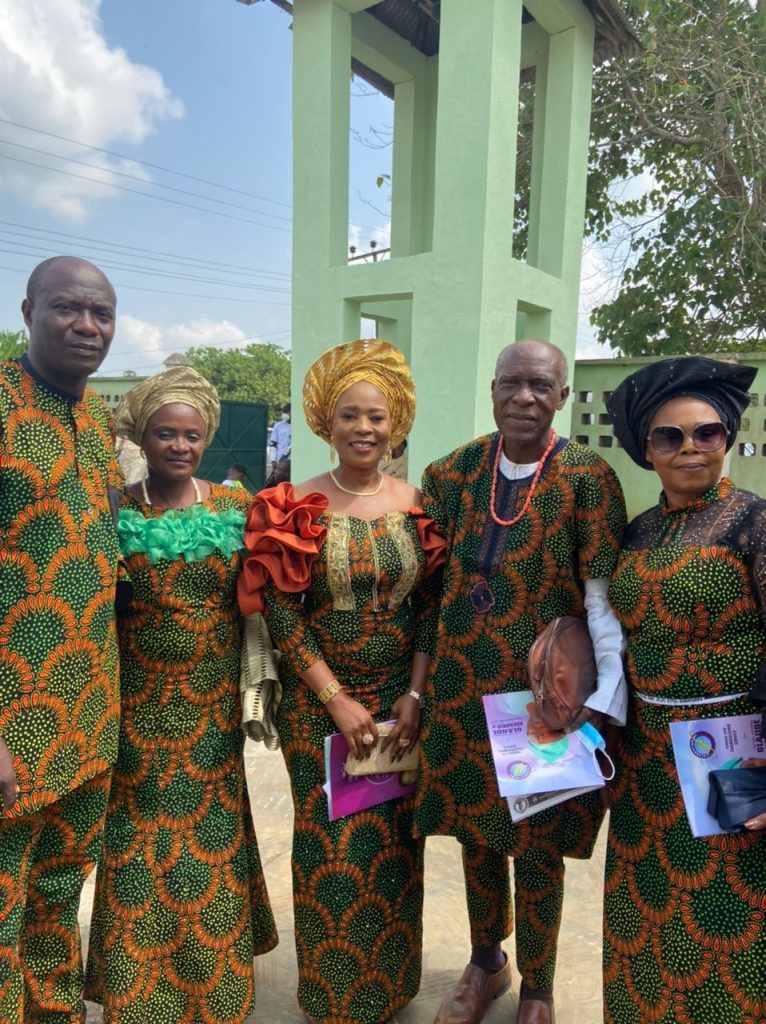 Some of the old students with a former principal of the school Mr. Olusegun Adebanjo

Chief Adebanjo was a 1964 Architecture graduate of Ahmadu Bello University.  He started his professional career with the Federal Ministry of Works and Housing. He later joined Ekwueme Associates (Chattered Architects) he was part of the team that designed the African Studies and preclinical sciences building at the University of Ibadan.

He resigned later and joined hands with other architects to form Adenrele Omisore Adebanjo (AOA) Associates Chartered Architects and Planners in Ibadan. While at AOA Associates, he was involved in major projects across the country. He was nominated to represent Nigeria in Hospital Architecture in Athens, Greece.

Otunba Adebanjo subsequently set up and founded Ladegbuwa Petro Products, trading as Ladegbuwa Oil. He was, for a long time in the oil business. He has a testimony of being a sound believer in Christ who served God in his lifetime

2023: CAN explains reason for interaction with presidential candidates, urges Nigerians to vote the best