Trending Now
Adeboye: Some women consider it privilege to sleep...
Despite challenges, God has been good to Nigerians...
Writers save lives, solve problems says Omotosho @...
Prince Harry’s book that hit 1.2m sales in...
Ex-Apola king, Idowu Animasawun celebrates 85th birthday with missions...
Nigeria can’t make progress if the Church is...
Peter Obi: I have not promised I will...
2023 elections and the imperative of divine timing
RCCG announces Prof. Aboaba’s passage says “He is...
The Paternoster Code: Debunking the age-long misconceptions about...
Home News MFM G O, Daniel Olukoya announces victory over Maureen Badejo in libel case 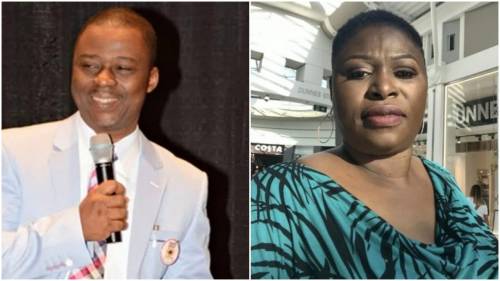 written by Church Times October 23, 2021
The General Overseer of the Mountain of Fire and Miracles Ministry, Dr, Daniel Olukoya on Friday, October 22 took to his Facebook page to announce his victory in a libel case over a Nigerian blogger; Maureen Badejo.

Olukoya had sued Badejo for using her social media channels to blackmail him and his church.

Badejo had said on her social media handles that Olukoya and his church duped the United States Government by selling his books in the US without paying due tax.   She also alleged that Elijah Toluwani Olukoya (Olukoya’s son) had N6bn in Heritage Bank in Nigeria.

The blogger also alleged according to a report online ” that a pastor from MFM in the UK paid £150,000 into the personal account of Olukoya and then went to Nigeria to meet the cleric so he could help him cover up his fraud.”

Badejo was said to have published what the “Incorporated Trustees of MFM and Olukoya, described as 52 lies”

But in a Facebook post, Dr. Olukoya states that the High Court, Queen’s Bench Division where the case was heard had delivered a considered judgment in the defamation action on October 22.
The judgment according to what Olukoya released on his wall,  “finds Maureen Badejo liable for defamation”  and had been ordered to:
(a) Pay six-figure damages in Pounds Sterling to both Dr. and Mrs. Olukoya, and
(b) Publish a summary of this judgment across nine of her social media channels for a period of ten consecutive days as a corrective measure and as a means of ensuring that her misguided and misinformed audience get to know about the Court’s decision.
“In awarding them judgment and damages, the Court recognized the intense, malicious, and relentless campaign waged by Maureen against the Olukoyas with whom she had no previous acquaintance or even the opportunity of a chance meeting.
“The court observed that the unjustified attack was widely publicized and had harmed the character, professional integrity, and reputation of the Olukoyas yet Maureen had neither apologized nor shown any remorse for her actions.”
Olukoya notes in the post that “the court had earlier granted an order of injunction restraining Badejo from broadcasting further defamatory matters against the couple and adjourned to take evidence on the questions of defamation, damages, and ancillary reliefs.”
The MFM G.O then praised God for this vindication of their name and integrity. They also appreciated all those who stood by them throughout this ordeal. God bless you all
0 comment 0 FacebookTwitterPinterestEmail

How sin gets its power of control-Gbile Akanni