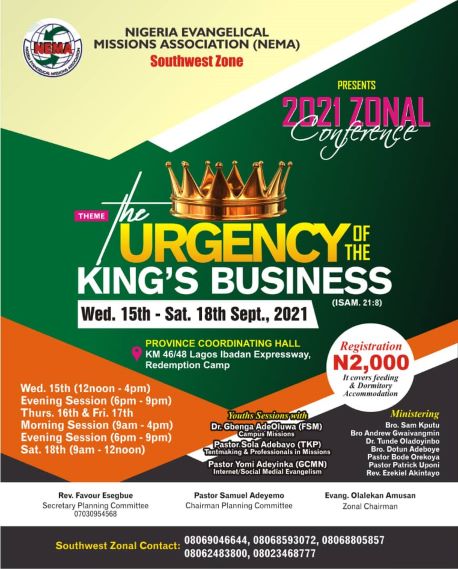 The conference according to the Chairman of the zone, Evang. Lekan Amusan will take place at the Province Coordinating Hall of the Redemption Camp of the Redeemed Christian Church of God along the Lagos Ibadan expressway.

Amusan said the conference tagged, The Urgency of the King’s business was put together to address certain strategic aspects of missions for the benefit of missionaries and would-be missionaries.

There will also be a youth session to be addressed by Dr. Gbenga Adeoluwa who will talk on campus missions, Pastor Sola Adebayo who will talk on tent-making and professionals in missions, and Pastor Yomi Adeyinka who is expected to speak on the Internet and social media evangelism.

Evang Amusan said further that the conference promises to be a life-impacting encounter urging missionaries to take advantage of the event.

He said critical issues that will help enhance the task of evangelising the world will be discussed during the conference.

Church should be at the forefront of societal transformation -Itua Ighodalo