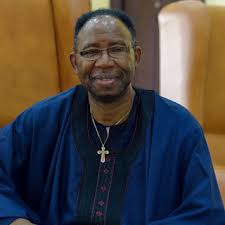 Despite the heavy downpour on Friday June 14, many top church leaders from across Nigeria turned up to grace the final burial rites of the late Archbishop Joseph Olanrewaju Obembe.

Obembe died on May 1 after a protracted illness. He was a one-time chairman of the Lagos Chapter of the Pentecostal Fellowship of Nigeria and the Presiding Archbishop of El-Shaddai Bible Church. He was also the Apostolic Prelate of International Communion of Charismatic and Apostolic Ministries ICCAM.

The burial ceremony which began on Monday June 10 was brought to a close on June 14 at the church’s Dolphin Estate headquarters with a three hour service. His remains were later interred at his Ogodu GRA, Lagos home.

The chairman of the Lagos Chapter of the Christian Association of Nigeria, Apostle Alexander Bamgbola had preached at the wake-keep on Thursday extolling the virtues of the late Archbishop. Many other church leaders including members of the ICCAM led by Bishop Taiwo Akinola were well represented at the event. They played prominent role at the ceremony.  Also present was the mother of the former governor of Lagos State, Babatunde Raji Fashola, Senator Gbenga Ashafa and a host of other dignitaries.

The event, which also turned out to be a reunion for old friends and members of the Foursquare Church which the late Archbishop belonged before he started his own ministry in 1983 began around 10 am. The church auditorium was filled to capacity with the giant canopy in the church premises also filled with well-wishers. The rain poured ceaselessly as the church service progressed. But many defied the rain to grace the occasion.

In this message at the ceremony, the founder of United Kingdom based Kingsway International Christian Center, Pastor Mathew Ashimolowo  recalled his meeting with the late Archbishop about 40 years ago in a branch of the Foursquare Gospel Church Nigeria where he (Ashimolowo) was Assistant Pastor.

He said the late Archbishop was an exceptional human being who had excellent character and was committed to service in God’s vineyard. He described him as a dynamic youth leader who gave his all to God’s service.

Ashimolowo who charged his listeners not to mourn the passage of Archbishop Obembe said the death of a saint before God is always precious.

Ashimolowo who was down-to-earth in his delivery told the congregation that no matter how human beings try,  death is inevitable. “We believe God heals and we claim faith for healing. But the truth is that we still fall sick here in this world. We experience sorrow and suffering. That you are comfortable does not mean you don’t go through challenges. That is the reality.”

He said no matter the supplement we take death is inevitable. “We really now don’t know what to eat. They tell us not to eat a particular food today and another person comes to tell us to eat it. They tell us some foods will give us cholesterol and shorten our lives. We are just being given all kinds of dietary recommendations. But all that cannot stop death. It is inevitable.”

The KICC founder said further “that death for the unsaved person is an enigma. For the atheist it is the end. But for the believer it is an entrance to glory. When a believer dies he only moves from one room to another. The late Archbishop Obembe has gone home to rest. What we have with us is just the body which I call the vehicle with which he came to the world. When you enter your room you don’t take your car into your room. You park it outside. Our late Archbishop has packed his car outside. His body is the car but he has gone into the room. He is with the Lord.”

While noting that life could be tricky he said, “As one grows old there are certain things you used to do that you can no longer do. I am 67. I know what I am saying. Old age restricts you. You can no longer jump out of bed anyhow again. When you are over 60 you wake up gradually. Wisdom demands that we take some practical steps to remain strong and fit. But that does not mean we will be here forever. We will all have to go one day”

He recalled that “the late Archbishop never wavered in his faith. He was a committed believer and I am sure in my heart that he is in the presence of the Lord.”

He used the opportunity to take a swipe at those who claim to have been to heaven and hell and who come back to give all kinds of contradictory stories. “They come back and tell us those who wear cap are not in heaven and those who wear trousers are in hell. I just wonder at such stories. The truth is there is no longer condemnation to those who are in Christ Jesus. Our brother, the late Archbishop is with the Lord. I am sure in my heart that he found grace before his maker. Ultimately it is not by works. Works will not take anybody to heaven. It is grace that will take us there.”

Meanwhile many churches have sent tributes and well wishes to the families.  The tributes which were contained in the burial programme x-rayed the life of the late cleric, praising his virtues and his contributions to the church of God in Nigeria