Trending Now
Adeboye: Some women consider it privilege to sleep...
Despite challenges, God has been good to Nigerians...
Writers save lives, solve problems says Omotosho @...
Prince Harry’s book that hit 1.2m sales in...
Ex-Apola king, Idowu Animasawun celebrates 85th birthday with missions...
Nigeria can’t make progress if the Church is...
Peter Obi: I have not promised I will...
2023 elections and the imperative of divine timing
RCCG announces Prof. Aboaba’s passage says “He is...
The Paternoster Code: Debunking the age-long misconceptions about...
Home Features Lagos 90-day scripture challenge ends with incredible testimonies, praises 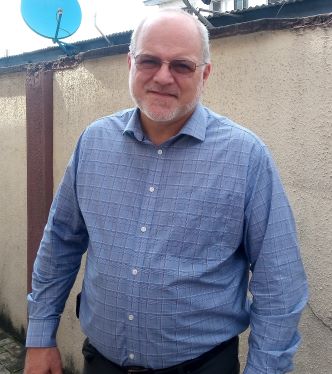 The 90-day Lagos Scripture challenge organised by Faith Comes By Hearing rounded off on Saturday, October 30 at the Maryland, Lagos headquarters of Agape Generation International Church

About 200 Bible enthusiasts were in attendance at the event which featured testimonies of how the programme transformed lives.

Faith Comes By Hearing,  is a US-based non-denominational Christian body. It partners with other bodies to record and provide God’s Word in every language that needs it. 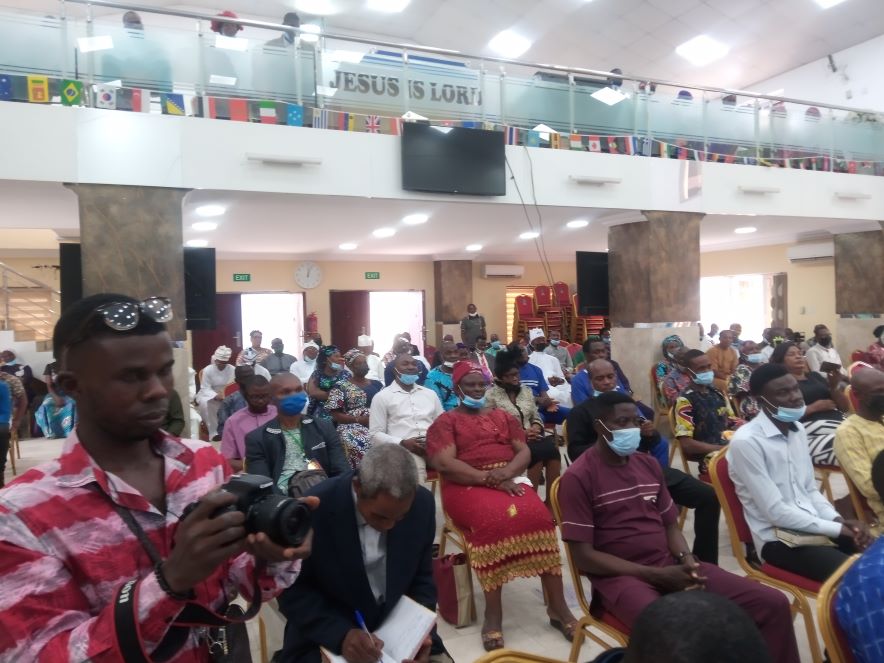 Participants at the closing ceremony of the Lagos Bible Challenge

The Bible challenge started in the month of August with the digital phase during which participants followed the reading of Bible portions through a dedicated WhatsApp group for 30 days.

This was followed by another 30 days of coming together in groups to listen to scriptures through a proclaimer audio Bible.

Churches that made it to the second and final round of the challenge were rewarded with acclaimers and proclaimer devices. The devices have scriptures in both audio and video format.

At the closing ceremony, the Nigeria director of the organisation, Mr. Nicholas Okereke expressed great satisfaction at the level of involvement of Lagosians. 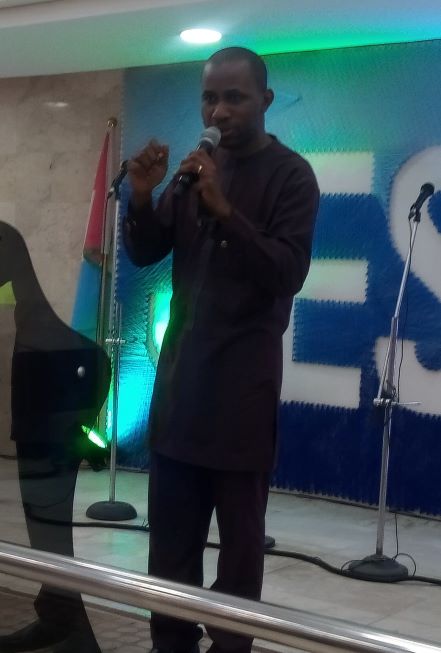 He, however, said the challenge had just started, The organisation according to him would get involved with the finalists at a greater level.

The training was to equip the facilitators with the head, hand, and heart model of leading Bible discussions.

Out of the 467 churches that participated in the challenge in August, only about 216 made it to the second round in the month of September while 141 churches made it to the final round in October.

Churches who made it to the final round were rewarded with the proclaimer and acclaimer devices.

The devices became instant evangelism tools for the churches. Facilitators used the tools at roadsides, institutions and public places.

At the end of October 744 souls were won to the Lord as a result of the use of the devices.

Okereke noted that the exercise was completely devoid of denominational indoctrination. He informed further that correctional centres in Lagos were not left out of the challenge. Many inmates according to him “testified of how the Bible impacted their lives.”

A facilitator, Ben Chuks said he did not know he could create time for the Bible challenge.

Chuks said the challenge opened his eyes to many things about the scripture. “Going through the book of Acts and John during the challenge gave me a new lease of life,” he said.

Femi Omidele said the challenge enabled him to listen and read the word of God in an unusually pleasant manner.

He also shared how listening to the Bible led to the healing of prostate-related health challenges that he had.

“I listened to the story of how a man came to Jesus and asked for healing and Jesus healed him. As that portion of the Bible was being read I was challenged.

“When I heard the exchange between Jesus and the man through the audio device, I immediately keyed into it. At that time, I had issues with my prostate. I had spent thousands of naira doing all kinds of tests. But that word that I heard brought instant healing to me. The prostrate issue disappeared.” 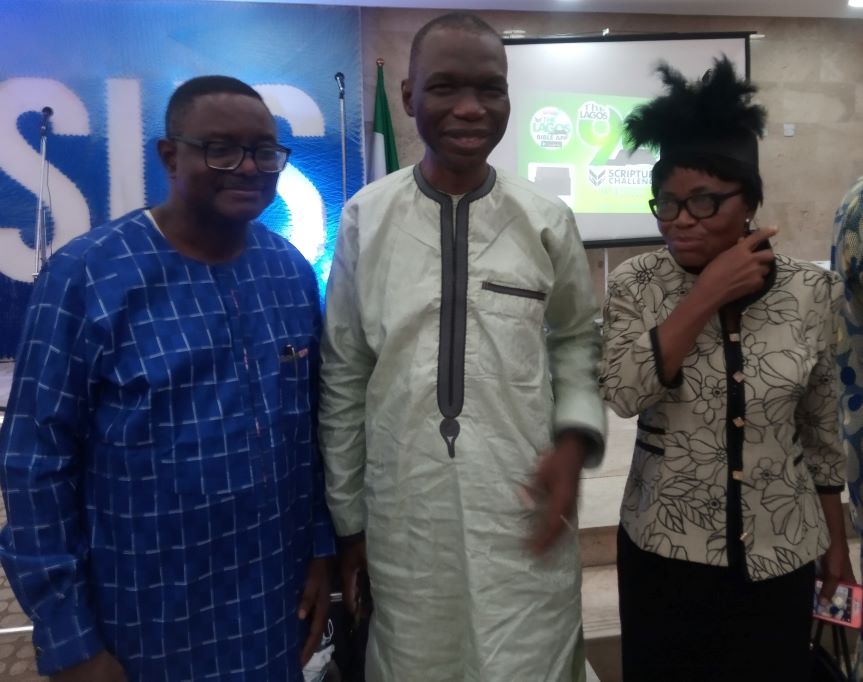 One of the beneficiaries of the acclaimer tablet, Ajose Emmanuel testified of how he had used the device to reach out to many schools.

A 70-year-old woman,  Theresa Odeniyi said the proclaimer tablet made her instant evangelist to schools. She said she has gotten requests from about 12 schools to come and use the device.

Another testifier said the beauty of the device is that it makes evangelism easy. She said she used to move about with all kinds of gadgets to be able to project Bible films.

“But with this device, we don’t need a generator because it is solar-powered. It has made evangelism very easy for us. I can’t thank the organisers enough.”She said.

How the Bible Challenge came to Lagos 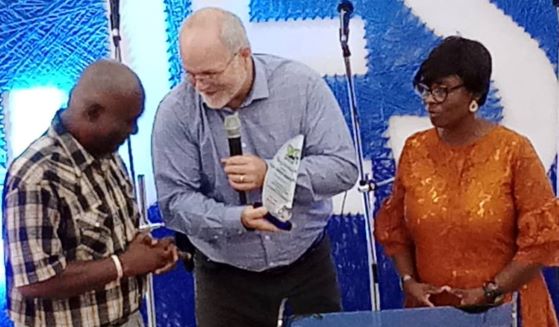 Evangelist Edwin Ebeniro, Africa Director of FCBH, Dr. Larry Burke, and Mrs Ebeniro while Ebeniro and his wife were being presented with a recognition award

Evangelist Edwin Ebeniro,  who facilitated the Lagos Bible challenge was visibly excited about the success of the exercise. Ebeniro is the  Chairman of the Lagos chapter of the Nigeria Evangelical Missions Association. He rallied the support of NEMA and other Christian bodies in Lagos for the scripture challenge.

FCBH recognized Ebeniro’s sacrifice and gave him and his wife a recognition and appreciation award. The Africa Director, Mr. Larry Bunke who handed over the award to the couple said the organisation is immensely grateful for their sacrifice and commitment to the project.

The national director of FCBH, Mr. Okereke had recounted how Ebeniro sacrificed his time and resources to ensure the challenge turn out successful. He recalled how Evangelist Ebeniro came to him in Jos and urged him to bring the Bible challenge to Lagos.

Okereke also thanked the duo of Blessing Aluko and Lanre Oguntuase who helped in the overall success of the project. 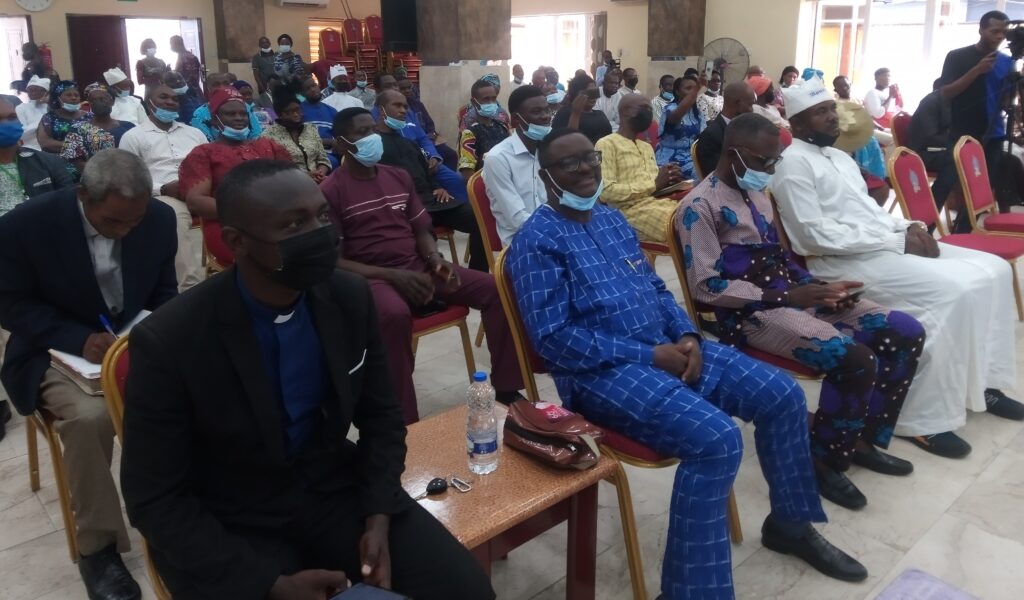 The General Secretary of the Bible Society of Nigeria, Pastor Samuel Sanusi, Chairman of the Lagos chapter of the Pentecostal Fellowship of Nigeria, Apostle Eyinnaya Okwuonu was represented by Pastor Tunde Elebute, and Lt, Rev John Azuka from Ikeja Cantonment Army Barrack were all in attendance with a host of other church leaders.

Rev Elebute speaking on behalf of Apostle Okwuonu said the Lagos PFN is solely in support of the Bible challenge. He added that God is behind the programme. “You have done great work. You have been a blessing to us. Thank you for creating time for us.”He said.

He further urged the finalists not to drop what they have learnt in the last 90 days. In his submission at the event, Rev Dr. Eric Ighalo said the challenge has shown what is possible. He noted that many young people are being distracted by mundane things. He however added that a programme like the BIble challenge will keep the youths in check and make them direct their energy to eternal values.

Lt. Azuka who is from the Nigeria Army Chaplain Protestant gave a graphic description of how the 90-day challenge impacted Army barracks across Lagos.

He said the coming of FCBH was divine. “I am an Igbo man, but I was able to read from Hausa Bible during the challenge with the aid of the proclaimer device. It was a wonderful opportunity. We saw that the gadget was meant for Nigeria people because you don’t need electricity to charge it.

He said the FCBH did well by customising the gadgets adding that through the exercise, participants got a glimpse of heaven. “The exercise gives us a picture of how heaven will be. We began to see ourselves as one. People who were after heaven. I am so glad I am part of this programme. “ he said.

He disclosed how the military adopted the programme into its training curriculum for chaplains. 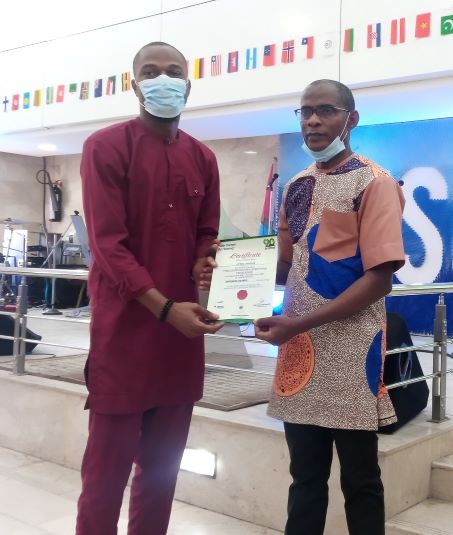 GS Bible Society of Nigeria, Right, presenting a certificate of participation to one of the finalists at the challenge

The BSN was one of the collaborating organisations for the Bible challenge. The GS of the BSN, Pastor Samuel Sanusi noted that the challenge must have cost FCBH thousands of dollars.

He challenged Nigerians to support the course of Bible translation noting that the white man had been supporting the gospel for hundreds of years till now.

Sanusi said Efik Bible was the first language Bible in Nigeria. He said the translation would not have been made possible if Mary Slessor had not sacrificed her life for the cause of the gospel.

He recalled his visit to the village where Slessor lived while in Nigeria.

“In that village, I had the opportunity of worshipping in the church Slessor built, in 1868. This woman left the comfort of Scotland, got into a ship and came to Nigeria, and went to the remotest part of the country. If she had not sacrificed her life and resources there won’t be Efik Bible and the backward tradition of killing twins would not have stopped at that time.”

The Bible challenge will go southwest next year- Toyin Kehinde 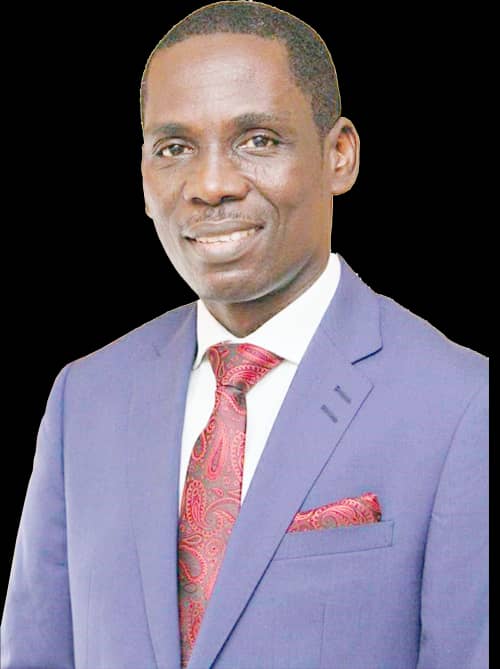 Rev Toyin Kehinde who is the pastor of AGIC, recalled how Evang. Ebeniro began the process of bringing the challenge to Lagos when they both went to Uganda. He described Ebeniro as a tireless man with an undying passion for kingdom work.

Kehinde who is the General Secretary of South West PFN promised to ensure that the challenge is taken to the six states in southwest Nigeria next year.

The Africa coordinator of FCBH, Larry Burke was full of praises to the BSN for facilitating the materials used for the 90-day challenge.

Burke said he had visited many churches and was glad to note that many Lagosians embraced the programme.

He recalled how many inmates in the prisons embraced the word of God. He shared the testimony of one of them who said he was impacted by the pidgin version of the Bible.

The Africa Director also shared the testimony of a prisoner who said listening to the Bible made him forgive those who accused him wrongly. “After he forgave them, God miraculously facilitated his release from the prison as his accusers had a change of heart and said they were no longer interested in pursuing the case that led him to detention,”Burke said.

About 150 facilitators were presented with certificates of participation in the 90-day scripture challenge.

Church should be voice of the voiceless -Adegbite, Lagos CAN Chair @ RURCON 50th anniversary