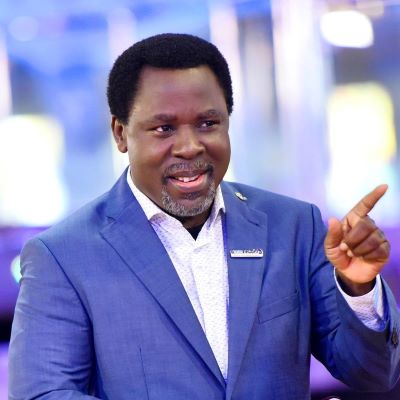 CAN representatives; Sanyaolu, Adegbite at TB Joshua’s burial, say, “He gave his life to humanity”

The Christian Association of Nigeria were duly represented at the ongoing burial of Prophet Temitope Joshua holding today July 9 in Lagos at the Church’s premises.

Prophet Joshua is the founder of the Synagogue Church of All Nations. His death on June 5 took many of his followers and the entire world by surprise.

The team of CAN at the ongoing burial ceremony was led by the National Assistant Secretary of the association, Elder Biodun Sanyaolu and the Chairman of Lagos CAN, Bishop Stephen Adegbite.

Speaking to reporters at the event, Bishop Adegbite said Prophet Joshua gave his life to humanity.

He said, “Prophet TB Joshua is a wonderful man of God. We are here to celebrate his life and pray that the Lord will be with his family and the church.”

Also, Elder Sanyaolu said it was important that CAN be represented at the event to honour the late prophet.

While declaring that his team was representing the President of CAN, Dr. Supo Ayokunle and the entire church, he said, “though Prophet Joshua was not a member of CAN, his activity as a preacher of the word of God was enough for the CAN to come and honour him.”

His words, “Late Prophet TB Joshua is not a known member of any bloc of CAN but we know him to be a televangelist, a preacher of the word and a giver. We are here to honour him” he said.

Few days after Prophet Joshua’s death the Christian Association of Nigeria sent a condolence message to the church describing him as a great man of God.

Akeredolu: I was beneficiary of TB Joshua’s philanthropy even as governor, recalls how he impacted Ondo communities