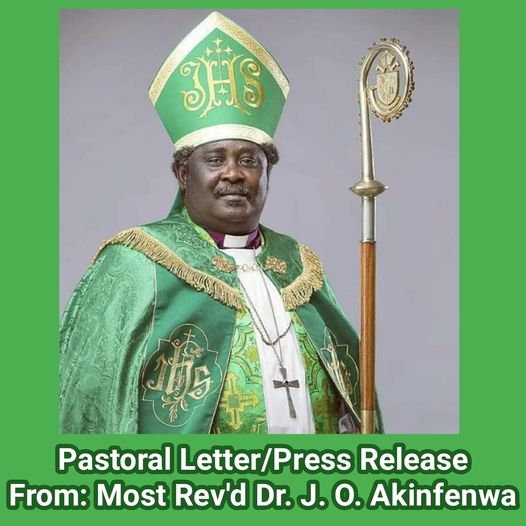 The Anglican Bishop of Ibadan Diocese, The Most Rev Joseph Akinfenwa has called for an emergency national dialogue to address insecurity in Nigeria

Akinfenwa made the plea in a pastoral letter published on the Facebook page of his diocese on July 29.

The dialogue will also be aimed at rescuing “Nigeria from non-state actors who have seized the initiative of official force.”

Akinfenwa noted the initiative of official force for ensuring stability and cohesion in a nation has been handed over to non-state actors.

He said the need to convoke the national dialogue had become imperative, “before our Government surrenders the instruments of state to terrorists and insurgents”

The name of the conference notwithstanding, the bishop said, “we need to urgently rally ourselves together as a people to discuss how to rescue Nigeria from imminent state capture by agents of evil.

“Recent events convince all right-thinking persons that terrorists and bandits have become more emboldened than ever.  And they are now totally unafraid of the agents of the State.

“We shudder to think that the Nigerian state has lost its monopoly of violence and that these non-state actors have accumulated capacity to demonstrate balance (or in fact, superiority) of terror against the State.”

Akinfenwa said the fact that the bandits can roam free, and even grant interviews suggest that “they are gradually becoming as powerful as (if not more powerful than) our legally constituted authority. It is therefore imperative and urgent that the people of Nigeria unite to fashion a way to overcome this existential threat, rather than wait for a Government that is deep in denial”

Who should be at the meeting

He suggested that the national dialogue should include all past political leaders at the national level, all past former Governors, and all authentic traditional rulers from all ethnic nationalities.

The meeting according to him should also include retired Generals and all past senior officers in the military and intelligence services, present and past leaders of the Organized Labour and trade unions, and Leaders of civil society organisations.

He said leaders of youth organisations, Nigerians in Diaspora, and all those who have won international honours for Nigeria in the past should also be part of the dialogue.

He recommended that “no one should be paid for attending this Convocation of Concerned Citizens. All who are concerned about our nation should attend at their own cost, and contribute their quota towards resolving the problem on hand.

“At such a gathering, Nigerians should listen to all groups that have grievances against the state (including even the bandits and terrorists who are willing to come forward with their grievances), and seek true reconciliation rather than a victor or vanquished situation.”

Many have lost hope in government

The Anglican Bishop noted that many have given up hope in this government and are just waiting for the 2023 elections. He said however that with respect to the security and economy, the elections are still far away.

“unless there is an urgent and radical intervention to arrest our descent into anarchy, this nation may in fact find herself in a situation whereby elections are difficult to hold (if not impossible). This is why we must all arise to help the Buhari administration to stabilize the ship of state” he said.

He expressed fear that “if Nigerians leave things entirely to our political leadership, these terrorists and non-state actors may actualize their threat that they would over-run the federal capital and kidnap the President.”

Akinfenwa pleaded with Nigerians to act quickly to rescue this nation from destruction.

“Let us accept the fact that our political leadership has failed us, and let us galvanize ourselves (through aggregations of community action) and act now to save ourselves before it is too late.

“Even though it may deny the fact, it is very obvious that the Buhari administration needs help – this Government appears to have run out of ideas and impetus on how to solve Nigeria’s myriad problems, security in particular. We the citizens just have to help our Government. The time to act is NOW. May 29, 2023, may be too late.”