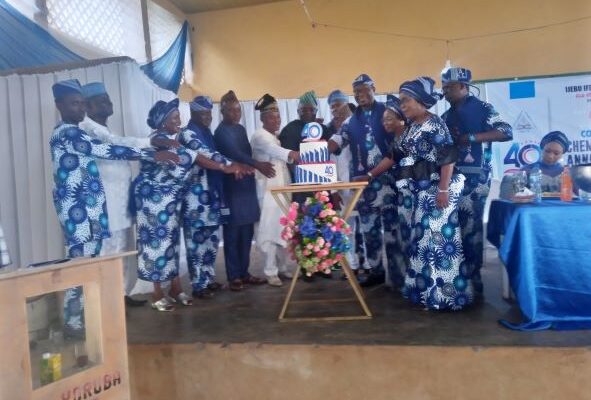 40 years ago in June 1982  members of the 1977/82 set of Ijebu Ife Community Grammar School, Ogun State bid farewell to one another after an emotion-laden valedictory service in Olajide Adebanjo Hall of the school.

It was not certain they would ever get in touch again. There was no GSM. Only a privileged few had access to the analogue phone used in those days. The only way many could still maintain contact was perhaps through letter writing.

So it was practically difficult for a larger percentage of them to see one another again for years. The coming of GSM however facilitated their reunion at least through phones.

Beyond the phone, the set led by Mr Kunle Adelaja organised a three-day reunion event starting from July 1-3. The main event on Saturday, July 2 took place on the school ground inside Olajide Adebanjo Hall; the same hall where they parted 40 years ago.

A reunion with fun and fanfare

It was indeed one reunion with all the fun, fanfare and fantasy. It was also an atmosphere for deep reflections. Some of them travelled from abroad to grace the occasion. Many came from across Nigeria.

They have all come of age. Perhaps the youngest person in the set would be 55. Some have become grandmothers and grandfathers. But that was not significant again. What was important was that they were able to see themselves after leaving school 40 years ago.

Many waters as they say have indeed passed under the bridge in those 40 years. Of the 137 students in that set, only about 40 of them could be represented with their pictures in the special brochure prepared for the event.

Some have transited to the great beyond. Some could not be reached due to logistics. There were those who perhaps were indifferent to the reunion. Yet, there are many whose whereabouts are not known.

But the turnout that Saturday was quite impressive. It certainly was not a mean feat to come together after 40 years of parting.

Beyond the reunion, the set also gave back to its Alma mater. It reconstructed the Chemistry Laboratory of the school and equipped it.

The project which was dedicated that Saturday by the Ajalorun of Ijebu Ife, Oba A. Oguntayo represented by Chief Kamarudeen Owode also an old student; cost the set about N4million.

The 1977/82 set had all along maintained a visible presence in the school before the reunion programme.

Some of them come from time to time to give career talks to senior students of the school. The set also gives scholarships to indigent students from time to time and instituted the best teacher award in 2019 with a prize attached to it.

The impressive impact of the set on the school earned it a merit award in 2019 from the Ogun State Chapter of the All Nigeria Confederation of Principals of Secondary Schools. The set was the only beneficiary of the award that year.

The 40th-anniversary celebration started with a prayer service in the mosque on Friday, July 1. And then the old students went to pay homage to the Ajalorun of Ijebu Ife, His Royal Highness, Oba A.A. Oguntayo.

Oba Oguntayo hosted them for about two hours reflecting with them on the years of their studentship in the school.

It will be recalled that Oba Oguntayo and a host of other indigenes of Ijebu Ife including Otunba Olajide Adebanjo were instrumental to the establishment of the school in 1975.

Otunba Adebanjo particularly played a leading role. He built a magnificent hall for the school, bought a power generating set, and a school bus for the school. He also built the principal’s house.

His investment in the school was perhaps enough for him to have started his own school. But he did not. Several other indigenes also put up structures in the school. They demonstrated selflessness and their desire to bring education close to the people of the town.

But then the school became a veritable institution of learning for people from other parts of Nigeria.

The gathering that Saturday was thus a gathering for thanksgiving and fellowship. It was a gathering designed to reflect on the past and forge a new beginning.

There was no failure among them. They were all clad in the same attire looking radiant.

The event also attracted other old students of the school including the National President of the school’s Old Students Association, Engr. Afolabi Adeniyi, who confessed that the 1977/82 set had done what no other set could do by the reunion programme.

Indeed, they have set the pace and it will now be a springboard for the other sets to bring development back to the school.

In his speech, the President of the set, Mr Kunle Adelaja recalled the last day in school 40 years ago.

He said, “Just like yesterday, it is 40 years since we all said goodbye to ourselves in this same hall during our valedictory service.

“I recall my eyes were heavy while singing this hymn, “Lord dismiss us with thy blessing” especially when we look at the last stanza because I know the implication.

“Let thy father-hand be shielding

All who here shall meet no more.

May their seed-time past be yielding,

Year by year a richer store;

Make more faithful than before

Adelaja however regretted that not all have been able to make it to the event. “Some are not here because of exigencies, some because we are yet to re-establish contact. But some have gone back to meet our maker,” he said.

Adelaja then called for a minute of silence to honour the memory of their departed colleagues. He prayed that their souls would continue to rest in peace.

The guest speaker @ the reunion

The anniversary guest speaker, Dr Kolawole Godonu, also an old student of the school underscored the essence of old students’ associations in his speech.

Godonu who is the Acting Deputy Vice-Chancellor, Administration, Lagos State University of Science and Technology, Ikorodu said old students’ associations are necessary for networking and for relationships.

He cited instances where he had benefited from old students of the school while pointing out that the association should, by all means, be encouraged.

Godonu lamented the deplorable state of education in Nigeria noting that the two main goals of education which are subject knowledge and mental development are not being achieved in many schools. He then called on old students’ associations to come to the rescue of their Alma Maters.

Members of such bodies according to him have a lot to benefit from one another. He insisted that the time had come for Old Students associations to collaborate with the government to help address the lapses in the education sector in the country.

The Principal of the school, Mr Segun Adesanya had earlier in his speech talked about the unique roles of 1977/82 set in restoring the glory of the school. He said students of the college have done so well in the sciences compared to the humanities and social sciences.

He however hinted that many indigenes of the town have not demonstrated so much interest in education. Adesanya said many prefer to learn a trade; a development he noted has become detrimental to their studies.

Beyond the skills acquisition, many according to him are only interested in making money and are not keen on education.

The Chairman of the Ijebu East Local Government, Mr Wale Adedayo who graced the occasion expressed concern about the lackadaisical attitude of indigenes of the Ijebu Ife to education.

He noted that many of the outstanding students in the community school are not indigenes of the town.

“I can tell you that many of the students doing well here are students from other parts of the country whose parents came to Ijebu Ife in search of means of livelihood.

“I have had cause to warn parents of this community not to sacrifice the education of their children on the altar of money-making.

“No matter how rich one becomes, without education that person will be relegated. So we need to encourage our children to study and aspire to be somebody great. Indigenes of Ijebu Ife should do the needful in this area” he said.

Chief Owode who represented Oba Oguntayo at the event brought greetings from the monarch. He encouraged the celebrating old students to remain one and continue to pursue the task of making the school a better place. He later led them to dedicate and commission the Chemistry laboratory.

At the event, awards were given to all the founding fathers of the school. Some members of the set who made great contributions to the success of the reunion were also honoured.

The chairman of the organising committee of the event, Mr Owolabi Taiwo said it was tough getting funds to prosecute the 40th anniversary because of the economic downturn in the country.

He thanked those who made funds available. He also appreciated others who made pledges to supply books for students and who also supported the anniversary programme in kind and cash.

The celebration came to a close with a special thanksgiving at the Christ Anglican Church, Ijebu Ife on Sunday, July 3. It was indeed a grand reunion; the odds notwithstanding. 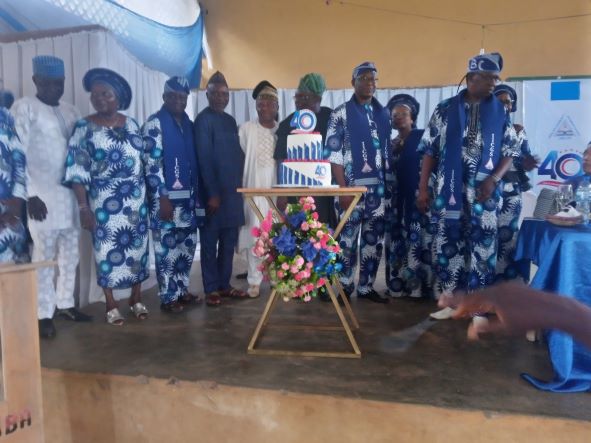 The hero of that glorious reunion is Folarin Owo-Odusi, a member of the 1977/1982 set. He came to the event with two of his children. He was determined to be there and had shelved all other programmes to see his colleagues.

He told his children a night before that the reunion was probably the last opportunity he would see his friends. It was as though he was being prophetic. And just as the event was wrapping up, in the midst of the rendition of the song, Oluwa mi mo mope to da bo,  (my God i am bringing a worthy praise), Owo-Odusi slipped to eternity.

It was like a joke. Efforts to revive him proved abortive. Those still around rallied round, prayed spiritedly, rushed him to the hospital and did all they could. He would not come back. He was eventually confirmed dead at the Babcock  UniversityTeaching Hospital.

Adelaja who spoke with Church Times at the end of the event expressed great shock at the development. He was however consoled that Owo-Odusi had a beautiful soul. “His son told me he had never seen his father happy in recent time like the day of the reunion.

“He perhaps came to that event to tell us goodnight. He loved his friends and saw the reunion as an event he could not afford to miss. His memory would live on. Folarin was a great man. He had a heart of gold. We will always miss him.”