Trending Now
Adeboye: Some women consider it privilege to sleep...
Despite challenges, God has been good to Nigerians...
Writers save lives, solve problems says Omotosho @...
Prince Harry’s book that hit 1.2m sales in...
Ex-Apola king, Idowu Animasawun celebrates 85th birthday with missions...
Nigeria can’t make progress if the Church is...
Peter Obi: I have not promised I will...
2023 elections and the imperative of divine timing
RCCG announces Prof. Aboaba’s passage says “He is...
The Paternoster Code: Debunking the age-long misconceptions about...
Home Columnist Hunger, insecurity, covid-19 and the dilemma of a nation
Columnist

Hunger, insecurity, covid-19 and the dilemma of a nation

This is not the best of times in Nigeria. Many families are in a financial mess as the means to meeting the basic needs: feeding, rent, medicals, and children’s school fees, are getting harder by the day. It is not funny at all.

Families are caught in the web of threatening hunger, worsening insecurity, and ravaging health challenges as posed by Covid-19 and cholera. More than Covid-19, cholera has claimed far more lives in the last few months. A total of 816 deaths have been recorded in Nigeria due to cholera outbreak since the beginning of the year. This is according to a statement released during the week by the Nigeria Centre for Disease Control (NCDC).

Simmering Covid-19 third wave is claiming more lives on a daily basis as sudden and shocking deaths in recent days were attributed to Covid-19 complications. It was shocking to read in the news that in Lagos alone, the third wave of COVID-19 pandemic has claimed an average of six lives daily in the last week. Mr. Governor, Babajide Sanwo-Olu, has announced; thereby making a total of 42 casualties in Lagos State alone.

This is a grieving development in our public health management. While nobody has been reportedly died solely due to Covid-19 infection, virtually all the casualties were reported to have had underlying health issues. The implication is that families are mourning daily for losing their loved ones to the cold hands of death. The trauma and fresh challenges posed by the death of family breadwinners have further plunged some struggling homes into deeper misery.

Yet, our medical infrastructure is allowed to depreciate without receiving deserved attention even as more doctors and medical personnel are leaving the country in droves. No thanks to poor working conditions, insensitive and nonchalant responses from the federal government to their situation and the health sector at large. It is convenient for our political leaders and public office holders to junket around the globe patronizing the best medical facilities for their health.

This is a luxury many of them could not afford on their own. Even General Muhammdu Buhari, who promised to fix the inadequate and fitful medical infrastructure if elected president in 2015 as a way of discouraging medical tourism abroad has become a regular medical tourist since he assumed office as president six years ago. Several other privileged people also jet out of the country to get medicare for themselves and their families.

As of today, poorly fed, jobless, and vulnerable masses are at the mercy of God for their wellbeing as they can’t afford the cost of medical services for themselves and their families. The same thing goes for security. Innocent Nigerians have become endangered in the country.

They prayerfully and consciously move around to avoid falling prey to ritualists in their communities. They nurse the fear of becoming victims of armed robbers, kidnappers, and murderous terrorists who masquerade as herdsmen and bandits on our highways. Living in palpable fear has now defined the perception and consciousness of an average Nigerian.

The effrontery of the daredevil gunmen is becoming more worrisome. Breaching the security structure of military formations as witnessed recently at the Nigerian Defence Academy, NDA, Kaduna further heightened the hopeless security situation. Ironically, staying at home does not guarantee security as kidnappers have been going into houses and palaces to kidnap people for ransom in parts of the country. And in a situation whereby the family of the victim could not meet up with the kidnappers’ demand, the victim, in most cases, will be killed.

There’s no day in Nigeria since January 1, 2018, to date without bloodshed. This is obviously a satanic operation going on in the most praying nation in the world. On daily basis, families keep losing their members to assailants needlessly. It is apparent that people’s security lies in the hands of their Creator and the little defense they could build around themselves in the face of compromised national security architecture.

Families can’t feed themselves as before 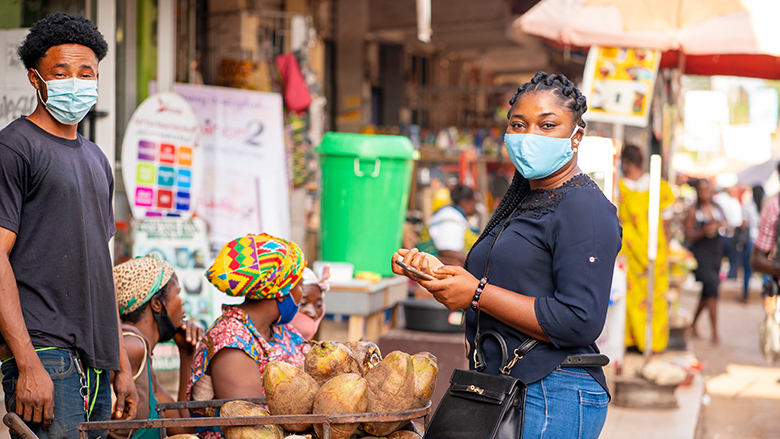 A scene from a market in Africa during the COVID-19 pandemic.

Hunger in the land is evident as many families couldn’t feed themselves sufficiently. The level of penury in the land has projected about 20 percent of Nigerians as feeding on less than one dollar per day for more than five years till date. Gradually, famine is creeping in as the cost of food items is hitting the roofs.

Hundreds, if not thousands, of farmers across the regions of Nigeria, could not work on their farmlands for fear of killer herdsmen, kidnappers, and heartless bandits. Food shortage is imminent if the insecurity and threats to life keep scaring farmers away. Many income earners can scarcely feed twice a day. What obtains in many homes is a situation where one square meal is eaten while light food like crunches, gari, biscuits, bread, and refreshments are served pending the time for the main meal for the day.

Life does not offer equal opportunities to everyone. Some are born more privileged than others but good governance should offer the enablement for every citizen to explore their potential to the fullest. Criminal activities thrive when ill-gotten wealth is flaunted, particularly so when the commonwealth of the people are being siphoned by those elected to hold in trust and administer the resources to the chagrin of the populace. The recent lavish wedding of the president’s son, Yusuf’, is a reflection of how insensitive and immodest some so-called ‘Puritans’ can be when tested with power and money.

Time is running out and people are getting agitated, impatient, hungry, and angrier by the day. The good news that the Gross Domestic Product, GDP, has leaped from 0.51% in the first quarter to 5.01% in the second quarter should be consolidated and be made to reflect on the welfare and standard of living of the citizenry. Though governance is not an easy task but the willpower to do the right thing without pandering to parochial sentiments, eschewing ethnic and religious biases or interests would have moved the nation forward than where it is.

Muhammadu Buhari-led administration should be told in clear terms that all is not well with many families out there. The trio of insecurity, hunger, and health challenges are squeezing the survival instincts out of many frustrated Nigerians. The leadership should please wake up, roll up its sleeves and do the needful.

Please keep hope alive, and do have a restful weekend ahead.

Re: Erectile Dysfunction: In Limbo of Sexless Marriage

“How about a man that claims he doesn’t like sex and suffers his wife? He can go for months without sex if I don’t ask for it, my husband doesn’t even mind. I would have to climb on top to have sexual satisfaction when I badly need sex, yet, he won’t respond at all throughout the time. What do you think of such a man? I need your input because as it is now, I’m at the breaking point and I don’t mind quitting. What is further infuriating is his nonchalant attitude towards his responsibilities as a family man.” Mrs. A. O.

“Now that they have realised their folly, will they swallow their pride and allow people to help them? I left my first marriage because the man was an incurable womaniser who almost ruined my health with venereal diseases. I was constantly on strong antibiotics and injections for six years. I had to quit because he was not relenting.” Ms. E. M

How to advance God’s kingdom in the midst of terror