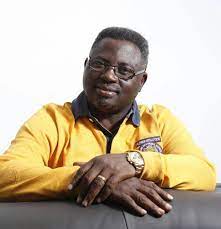 The founder of UK-based Kingsway International Christian Centre, Pastor Mathew Ashimolowo has said the greatest mistake he made in his 50 years of ministry work was including his name and that of his wife as trustees of his ministry.

He made this known during a recent interview with the Founder of Calvary Bible Church, Pastor Olumide Emmanuel,

The interview was conducted in the presence of members of the Calvary Bible Church. It touched on Ashimolowo’s ministry 50-year ministry experience.

Ashimolowo once had issues with the UK government on account of the corporate governance of his church. He said if he had known how the law operates he would not have put his name on the board of trustees of his church.

Many pastors according to him are not aware that when they put their names on the board of their church they are not supposed to draw salaries or any allowance from the church. ‘that clause is in the Company and Allied Matters law. But many Nigerian pastors don’t know.’ he said.

He advised that church leaders should not make the mistake of putting their names or that of their wives or family as trustees.

Wanted to be a soldier

Ashimolowo in the interview also recalled how he began ministry noting however that he had wanted to join the military when he became born again and encountered someone who told him he would do well to work as a pastor.

He said he was working as a sexton in a Christ Apostolic Church before he joined the Foursquare church and later went to the seminary to prepare for full-time pastoral work.

His early years in ministry according to him were tough. His salary as a full-time pastor with the Foursquare Church was N50. ‘don’t think that that was big in those days. It was not. That was the monthly allowance of my wife when she was in school.” he quipped.

The Osun  State-born pastor said it was customary for churches to overuse their pastors and underpay them.  The remuneration system of the church according to him was not encouraging.  He however noted that he was able to explore other opportunities to make some extra income for himself

Ashimolowo who is a son of a soldier man said the first language he spoke was the Hausa language, and then English before he began speaking Igbo and then the Yoruba language.

His early exposure to petty trading prepared him for the entrepreneurial dimension of his ministry. “In my early years, I learned how to do business on the street. I lived on the farm for one year. We used to sell farm produce. I could sell anything and make  profit,” he said.

By age 27, he was able to build his first house. He also acquired about 30 acres of land along the Lagos Ibadan express road in the 80s. He said he has been re-selling the land in bits at a very good amount ever since.

His breakthrough in the UK

Ashimolowo said the first thing he did when it dawned on him that he was going to do ministry in the UK was to take a course of study in the sociology of Britain.

This is one of the tips critical for success in ministry according to him. “A pastor needs to understand the sociology of the place he operates so he could make maximum impact.

He said the understanding of the culture of Britain helped him greatly noting that 99 percent of churches in the UK started by Nigerians are filled with Nigerians . ‘this is happening because many Nigerian pastors are yet to divorce the Nigerian culture from their system .’

While admitting that KICC is also majorly blacks, he said they are blacks from different countries of the world and not necessarily Nigerians.

Ashimolowo said he had to work on himself to be able to make an impact in the UK adding that he embarked on a 75-day fast when he was to start KICC.

The book that transformed him

A book titled, Power of Vision” was the first major book that propelled him to greatness. “I realise I had to do something unique ‘ I made a deliberate decision to run a church of excellence. Our church was the first to bring foremost “gospel artists from the US to Britain and we did not charge a gate fee. That was new to the people .’

He said his exposure to CAC and Foursquare has influenced his theology. He recalled how he used to have all-night prayers every day of the week apart from Saturday with the CAC pastor he worked with in the early years of his ministry.

Ashimolowo said the CAC church has fire while the Foursquare church had light adding that he was able to combine the fire and light of the two churches to become who he is today.

How he met his wife

The KICC founder got born again at age 20, was called to ministry at 21, and went to Bible school at 24. He said he began praying for a life partner 7 years before he approached his wife.

Incidentally, he was his wife’s counsellor. ‘My wife used to come to me for counseling about marriage and other issues. I was the one counseling her on who to marry and who not to marry,” he said.

That went on until somebody gave him a hint that the lady she was counseling could well be his wife. That was the day he proposed to her.

His wife was the daughter of the Foursquare pastor he worked with as a full-time pastor. That was before the Foursquare church sent him to the UK to start a branch of the church.

Life as a full-time pastor

As a full-time pastor in Foursquare, he lived in a face-me-I-face you apartment on 46 Bajulaye Road, Shomolu. But he had to deliver himself from financial frustration.

Ashimolowo soon deployed his entrepreneurial skill alongside ministry work after coming back from his first trip abroad. He began Mattyson Media and became representative of about 30 publishing firms in Nigeria. That was as in 1984. The turnover of the company according to him has since hit billions.

The KICC pastor who got married in 1981 said many pastors make the mistake of not giving attention to their families. ‘That should not be. It should family before ministry. I don’t joke with my family.” he submitted.

He said the UK govt could not pin anything on him because they discovered that his business is separate from the church. Ashimolowo added also that he takes a special interest in his children. He said he gave them cars at their weddings.

Earlier in the interview, he stressed the need for theological education for pastors. He described as unfortunate how many leading pastors in the country could not respond to Daddy Freeze’s poser on the subject of tithing.

On the secret of his fitness at 70, he said, “I stopped eating rice 24 years ago. I stopped taking coke 23 years ago. I stopped eating eba 24 years ago. Most foods in Africa are not meant for sedentary workers. They are food meant for farmers. But many people who don’t do any energy-sapping work still take those kinds of food. If you want to live long and keep fit, then you have to do what I do. You will never see a fat old man.”