Trending Now
Adeboye: Some women consider it privilege to sleep...
Despite challenges, God has been good to Nigerians...
Writers save lives, solve problems says Omotosho @...
Prince Harry’s book that hit 1.2m sales in...
Ex-Apola king, Idowu Animasawun celebrates 85th birthday with missions...
Nigeria can’t make progress if the Church is...
Peter Obi: I have not promised I will...
2023 elections and the imperative of divine timing
RCCG announces Prof. Aboaba’s passage says “He is...
The Paternoster Code: Debunking the age-long misconceptions about...
Home Features He was to die @14 but he turned 60, still counting: Story of Anglican priest, Ven. Arowolo
Features

He was to die @14 but he turned 60, still counting: Story of Anglican priest, Ven. Arowolo

By age 14 Clement Taiye Arowolo was sick and almost dying. His mother who believed in divine healing invited a prophetess to pray for him.

By the time the prophetess finished praying, the verdict was that the young Arowolo would not survive the sickness. She told his mother not to bother about taking care of him again that it won’t be long, he would be gone.

That information stirred a fit of holy anger in the now distraught young man.  “I told the prophetess that I will not die. Then I turned to my mother and told her not to take the prophecy to heart, I assured her I would live.  The prophecy was not for me. I rejected it. I sent it back to the sender” Arowolo recalled.

Though he was not strong in faith, he said he had no stomach for any negative prophecy.

Looking back, he said “now when we count the years from age 14 when I was meant to die to 60, I can only say it is grace that has kept me. It is not that I have been clever or righteous or that I know the best medicine to take. It is God that has been faithful.” 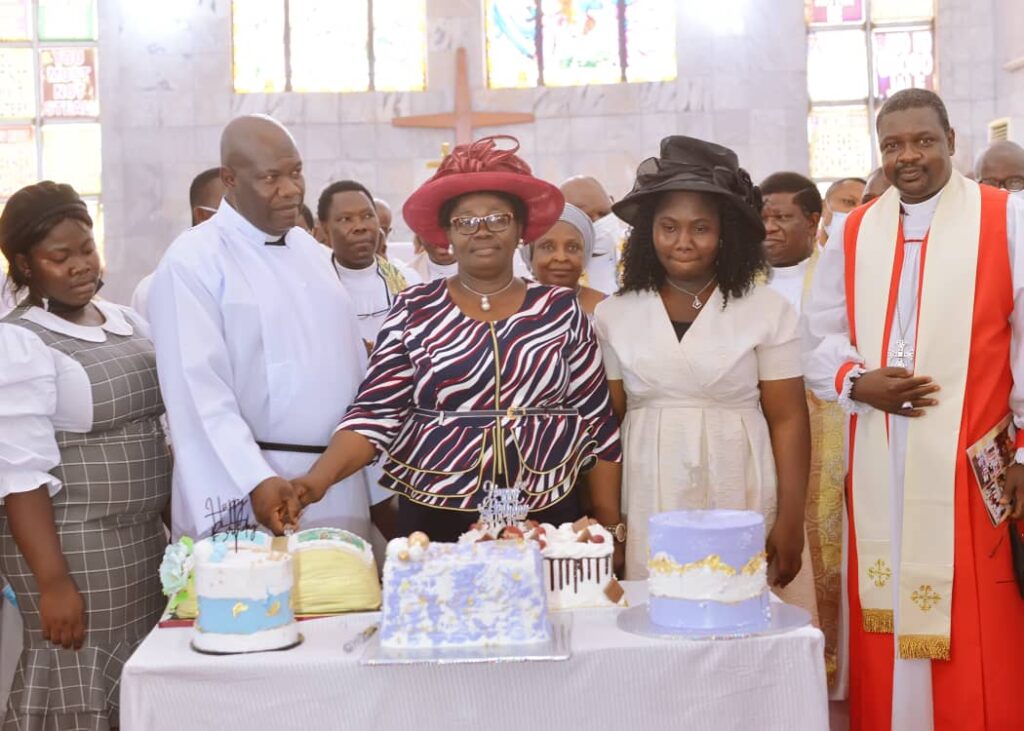 He and his twin brother, Prince Kehinde Arowolo clocked 60 on March 22. It was a Tuesday. But the atmosphere suggested it was a Saturday.

Many people abandoned their work and other engagements to honour Arowolo who is the Vicar in charge of St. John’s Anglican Church, Iju Ishaga.

The Bishop of the Diocese of Lagos West of the Anglican Communion, The Rt. Rev. James Odedeji had to also shelve his programme to grace the occasion. He delivered a soul-inspiring sermon on gratitude at the celebration.

Odedeji noted there are so many things to be grateful for.

Making copious reference to the scriptures, he said, “ That you are alive today is a privilege, not a right. Appreciation is an application for more blessings. Expect more blessings. Expect goodness and mercy. The more you appreciate God the better for you. Those who are not grateful are prone to making more mistakes and more frustration.”

He counseled the celebrant not to rest on his oars, “don’t rely on or be carried away with previous successes. It is not the time to rest on your oars. Do not allow the law of diminishing return to set in.”

He charged Arowolo to shun discouragement and the frustration of the End-time. “Focus on your focus and you will become the focus. Please God perpetually. You can’t please men. Don’t allow the hurts of others to weigh you down. God is your employer. Have that at the back of your mind.”

He counseled further that the celebrant should make heaven his goal. “Watch out for heaven. If a clergyman misses heaven, it is multiple tragedies. After all the labour and you now sleep and the angels are not there to welcome to heaven?, it will be tragic. We must get home,” he declared.

Bishop Odedeji described Arowolo as a dependable priest. “If he is wrong, you can be sure that he is sincerely wrong. He does not set out to do the wrong thing. I must also thank God for his wife. His wife is an asset not only to her husband but to the church of God.” 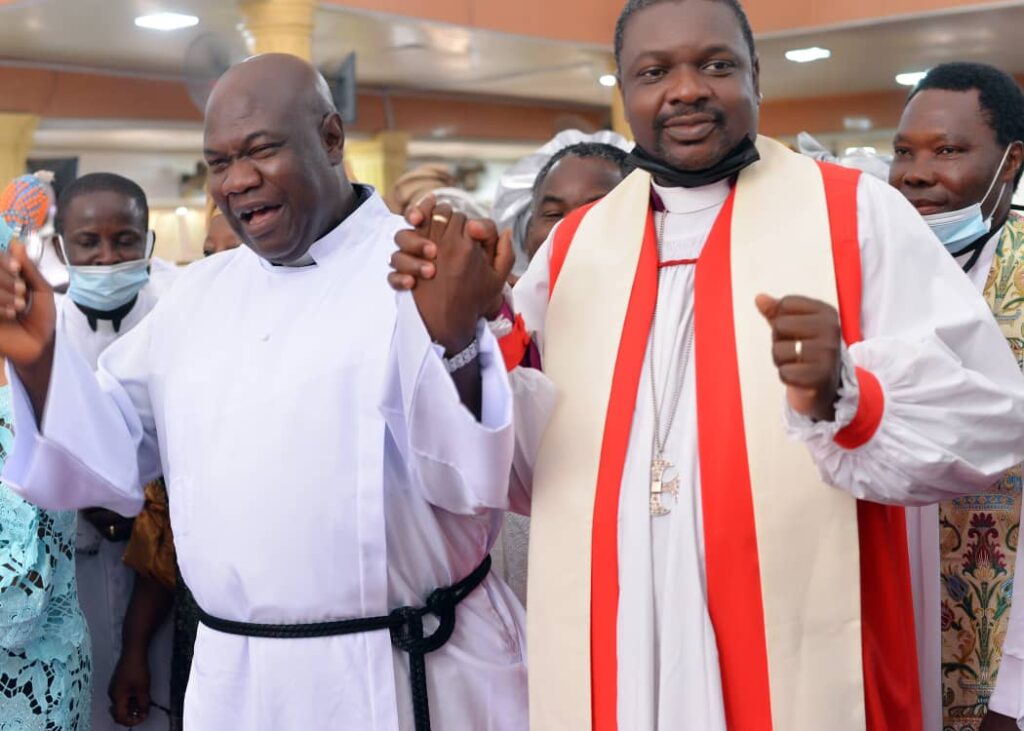 Indeed, going by the mass of people that graced the occasion it was clear Ven Arowolo had impacted many

Many of the people he had not seen for close to 15 years made time to be at the event. The goodwill was indeed overwhelming.

In a later chat with Church Times he said he was greatly impacted by the life of the pioneer Bishop of the Diocese of Lagos West, The Rt. Rev Peter Adebiyi now late.

He said, “I can say what has helped in life was the impact Baba Adebiyi made on me.  Adebiyi was a straightforward person. He used to encourage me not to accept defeat and to be focused in life.”

Ironically, Arowolo was reluctant to answer God’s call because of the prevailing poverty among clergymen in those days.

“The poverty of the priest was so much that when I wanted to become one, some of my friends were wondering why I wanted to join the league of poor people. They tried to discourage me.”

The discouragement got a bit of him. “I tried so many other things because I did not want to heed the call. But things did not just work out. I made money from some other engagements but there was no peace of mind for me. Eventually, I had to say yes to the Lord,” he recalled.

Arowolo said his decision to say yes to God elicited joy in his father who quickly took him to the then Primate of the church, The Most Rev Joseph Adetiloye.

“The day I agreed to say yes, I was coming from Ilorin but the money I had on me got finished on the road. I had to trek for almost 10 kilometers to get home to tell my father I was going to be a priest.

My father was happy

“When I told my father he was so happy. He just called his driver to take us to Baba Adetiloye at Odo Owa. Incidentally, we met him at home because he was supposed to be in Ekiti at that time being the Bishop of Ekiti then. We met him eating pounded yam and he invited us to eat. But my father said no, that he was there to present me to him.”

That was the beginning of Arowolo’s journey to priesthood.  Adetiloye handed him over to the late Bishop Adebiyi who brought him to Lagos when he was translated to Lagos as pioneer Bishop of the Diocese of Lagos West.

It was through the late Bishop that he went to Vinning College Akure where he had his theological training. His first station after training was Holy Trinity Ikate, Surulere. So far he has put in 32 years in God’s service with the Anglican Communion.

God is a rewarder 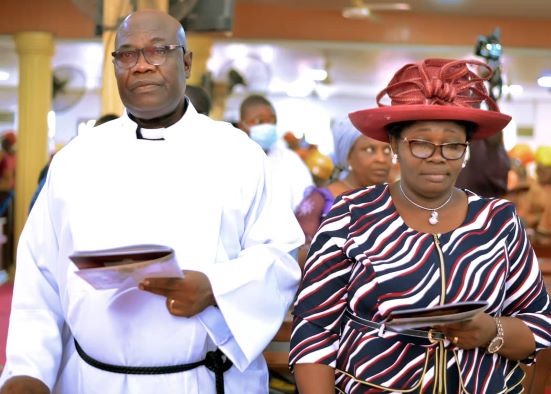 Ven Arowolo and his wife, Nkem

He recalled how God used a parishioner to help him complete a house he had abandoned. “I was building a house. When I got to the lintel level, the money I had finished. I abandoned the house for almost five years.

“We got there and he wondered why the house was so small. I said I just needed to build something that I could afford.  He then promised to complete the building. To date, I don’t know how much he spent. He roofed it, tiled it and did all the fittings and accessories, painted it, and handed over the key to me. That is what God can do”

Arowolo believes when God sends your own covenant helper, it would seem a joke. “As a priest, you need to humble yourself and address people with the right words. You don’t talk to people anyhow. That has helped me in my relationship with people.”

Fight battles with your friends

One of the guiding principles for Arowolo is to sacrifice his time for his parishioners. “My principle is that if any of your friends or member is in a problem join him in fighting the battle because when he wins he will remember you. I go at any length to pray and fast along with my parishioners.

“That is what has made them show love to me. Just today, a friend gave us a cheque of N2.5million for a church building project we are doing. I just made the appeal during the birthday celebration service that I would want my friends to support the building project and the person gave the cheque quietly. It is God that is doing his work.”

While promising to hold firm the counsel of Bishop Odedeji he said, “I will continue to strive to expand the kingdom of God here on earth. The Lord has used me to win many souls to Christ as a result of my interaction with them. I want to trust God to continue doing this as God gives me the grace.”