During the three-year period that he served as the Provost of the West Africa Theological Seminary, (WATS) Pastor Oluwafemi Martins did not leave anyone in doubt about his passion for the school. He breathed WATS. He talked WATS. Pastor Martins dreamed of WATS.

He perhaps had no other thing that consumed his passion than the school God brought his way in 2006 during his journey on this side of eternity.

So when he passed on May 28, 2022, it was like a part of the WATS community had gone. But there is hope. His legacy and his footprints are so strong that it will be difficult for time to erase them.

And the school lived up to expectations. On Wednesday, June 29 it organised a grand service of songs and night of tributes in Pastor Martin’s memory. The service attracted hundreds of people from many denominations including top church leaders. The online attendance cut across the globe.

At the service, there was a general consensus that the late WATS provost was an uncommon leader with sterling qualities. The founder of the institution, Rev Prof. Gary Maxey, an American was the first to pay tribute to Martins at the event

Maxey said he was grateful that God brought Pastor Martins his way. He stated, “Thank God I had a  great friend and brother in Femi Martins. He was committed, loyal, friendly and reliable.”

He recalled how Martins coordinated a special programme that helped WATS get media attention in 2008. He added that “Femi’s engagement became more pronounced in 2009. He was recognised for his hard work. On a daily basis, we worked together during those busy days in 2011 when he served as the national coordinator of the Year of the Bible campaigns closely with Dr Fred Odutola, the then General Secretary of the Bible Society of Nigeria”. 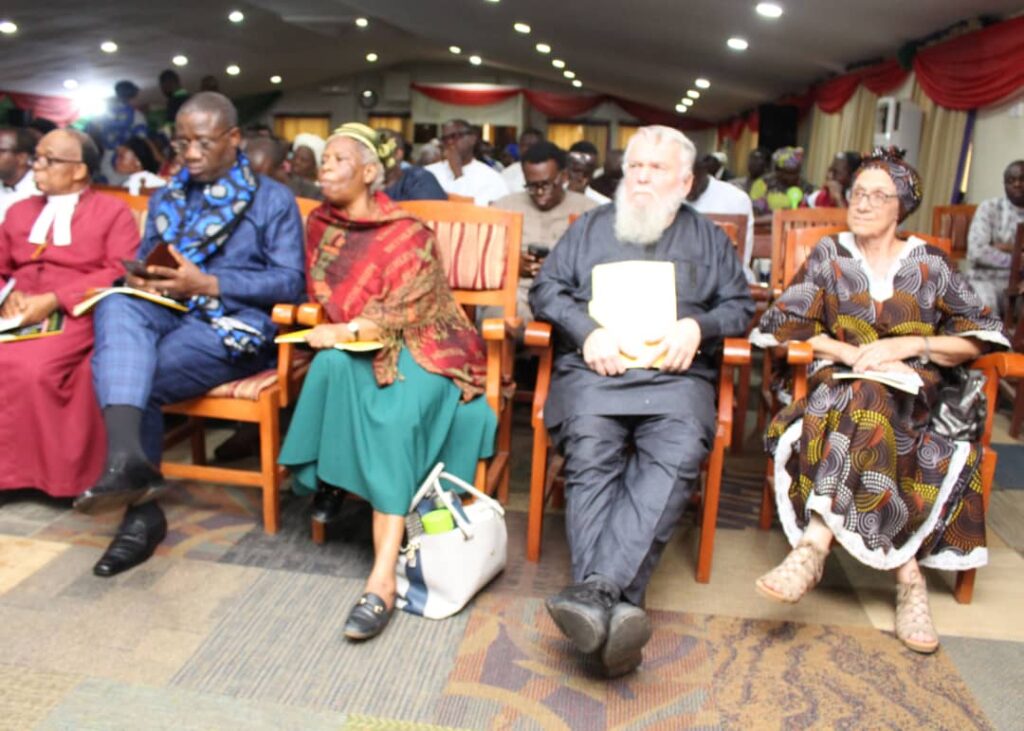 He said, “He was not a lazy man. He sometimes did that strange thing like beating his body the way Paul did so as to accomplish tasks. Femi knew his friends and knew how to display loyalty. He did not only work for a physical living but also for conviction. He was a man who grabbed responsibility by the horn. You could rely on him. He took on heavy responsibility during the celebration of the 400 years of the KJV Bible. Femi was highly dependable.”

Apart from getting the job done, Prof. Maxey noted that “Martins had high moral and ethical standards. He was a  man of integrity. He was a man of deep commitment to God. Everything he did was carried out in that spirit of love.”

Prof Maxey and his wife, Emma Lou have been in Nigeria for well over 40 years doing missions.

Maxey said further, “Femi was a man of respect and was respectable. Over the years even when we don’t see eye to eye, he never failed to show me deep respect. He was not proud or demeaning to others” 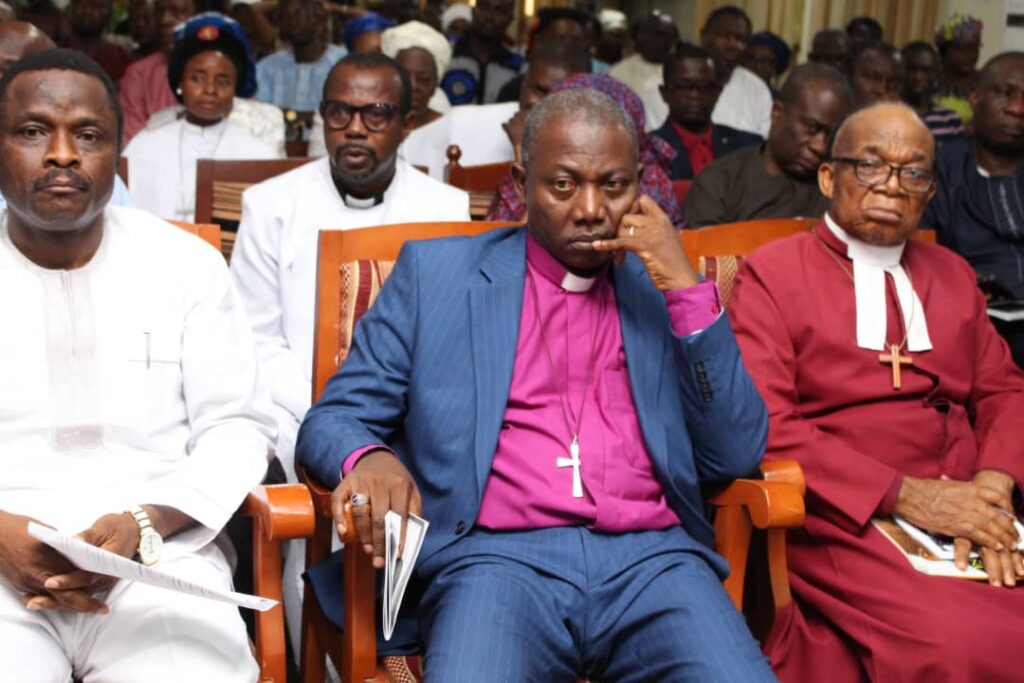 Dr. Oluwayemi, Prof Asaju and Prof Ukah at the service of songs and night of tribute

The chairman of the Governing Council of the School Dr Emmanuel Oluwayemi described Pastor Martins as a man who was completely sold out to God’s work. He promised that his contribution to WATS “will never be forgotten till Christ comes.”

He then informed that the governing council had approved immortalising Pastor Martins’ name in WATS.  The Administration Building was later named in his honour. An endowment scholarship was also launched in his name with the presentation of a book, In the sand of time. The book is a compendium of tributes and research excerpts in honour of Pastor Martins.

Dr Oluwayemi recalled his first encounter with Pastor Martins 16 years ago. He said, “I knew he was a bundle of talent and a man full of ideas on how to make things work.”

He said when Pastor Martins joined the governing council, his contributions and connections became a great asset to WATS in the areas of fundraising and development.

A one-time provost of the institution Dr Williams Udotong was philosophical in his tribute. He urged his listeners to draw huge lessons from the life of late Femi Martins.

He said, “We are here today to celebrate our brother. He was my close confidant. He was a detrabilised Nigerian. We have been very close. We have continued to meet together. On Sunday of the week he was to go for the surgical procedure we talked and prayed. Even when he was shaking he was talking about WATS.

“That Tuesday that he had the surgical procedure I prayed with him. On Thursday after the surgery, I went to see him in the hospital. He was talking about WATS and was so passionate that his blood pressure was going up as indicated in the machine connected to his body.

“He was sold out to what he was doing. We were looking forward to Saturday when he would be discharged only for us to hear the news that he had passed on. This is not the end of the journey for him. He lived for God. And he lives on.”

The General Overseer of Glory Christian Centre, Pastor Iruofagha James recalled how the late Pastor Martins honoured an event in his church even with a brace on his neck.

He also confirmed that Martins could not stop talking about WATS. He was love personified. He was a good friend. We are comforted he is no more in pain. He was a living example of commitment.”

Doyin Oladipo who spoke on behalf of the board of WATS gave a moving tribute. She described Martins as a man full of energy.  “He never believed he was ageing. On his sick bed, he was still asking for the audited account of WATS. He was always willing to help people.”

Pastor Martins was an alumnus of Yaba Technology. He was running a doctoral programme at the Asbury Theological Seminary in the US when he passed on. He was to complete the programme this year 2022.

The tribute which was read by Pastor Nureni Alabi said Martins was a dependable bosom friend always ready to make a difference.

“Pastor Martins became the engine room of the association moving from one assignment to another. His impact was so great and his initiative so noble. He was an incurable optimist. He left an indelible legacy for the association.”

A lady, Titi Aboyade-Cole who described herself as the baby sister of Pastor Martins said it had been difficult for her to come to terms with the reality of his passage.

“I was wishing it will be a bad dream. I never imagined he would die. I must have been a fool for a woman of my age not to think that no one will live forever. ”

While noting that Martins was born a leader, she said,  “He did not just become a leader. He was the first fruit of our mother. My mother is in shreds. Nobody thought a day like this would come while my mummy is alive. We look forward to God for strength.”

Describing Martin’s loss as a loss of leadership in the family she said, “the bonding glue in the family has gone. Our father died in1975. I was a baby. Pastor Martins was already a man when I was born. He was mummy’s ‘husband’ because my mother did not remarry. He was literally the only person who took on the fatherly role in the family. He was the wealthiest in wisdom and knowledge. He lived and died a man of integrity.”

The Director of Administration of WATS, Dr Tosin Awolalu who worked closely with Pastor Martins recalled the last day encounter with him. In a piece titled, Tribute to my “Paul” Awolalu gave a moving account of the countenance of the late provost while on the sick bed.

“He was looking quite refreshed and had almost babylike freshness on his skin, for which I was so grateful. I realised that the few days in the hospital had freshened him up and I very much wanted him to rest, fully assured that he was to be discharged in the morning and we would then have review and fully brief him on the office work. So I made a thumbs-up victory sign to him”

Awolalu left him only to be called back nine hours later to hold on to Martin’s warm body and to cry to God to bring him back for the assignments which they had promised each other to accomplish together.

“The medical officer tried a heart resuscitation again. Alas! he was gone. My heart is heavy and it sinks at the reality of not being able to speak with Oluwafemi again,” Awowalu stated

Prof E.M Uka, Dr Olufemi Emmanuel and a host of others paid glowing tributes to the late provost.

Dr Emmanuel noted that despite the paucity of funds in WATS, Martins ensured the huge debt of the school was paid off. “He was still able to increase staff salaries. He was innovative despite stiff resistance to his developmental strides to uplift the institution that he passionately loved and served.”

Dr Bolarinwa Omotsho worked closely with Pastor Martins. He extolled his prudent and honest life. “He is a meticulous individual with high integrity,” he said.

In his tribute, Dr Eugene Ukaoha a lecturer at WATS noted that “Pastor Martins was the first student of the school to become a member of its Governing Council and subsequently became staff and was appointed the director of communications and fundraising. Providentially he later became the 5th African provost of the West Africa Theological Seminary”

At the service, the choir of different denominations presented special songs while a number of people paid tributes to him.

The event was wrapped up with a soul-searching message by Prof Dapo Asaju, former Vice-Chancellor of Ajayi Crowther University.

Asaju who is presently the Bishop of Ilesha Diocese of the Anglican Communion spoke on the topic, God does as he likes. He noted in the message that life is short and that God who is the owner of life can ask for it at any time.