Trending Now
A “widow’s” lamentation and lessons for RCCG, others...
God’s word: A case for non-English speakers in...
Adeboye: Some women consider it privilege to sleep...
Despite challenges, God has been good to Nigerians...
Writers save lives, solve problems says Omotosho @...
Prince Harry’s book that hit 1.2m sales in...
Ex-Apola king, Idowu Animasawun celebrates 85th birthday with missions...
Nigeria can’t make progress if the Church is...
Peter Obi: I have not promised I will...
2023 elections and the imperative of divine timing
Home News Deborah’s parents forgive daughter’s killers, not ready for legal action…Nigerians show solidarity
News

Parents of Deborah, the part two student of Sheu Shagari College of Education who was gruesomely murdered by Muslim Youths for alleged blasphemy on May 12 in Sokoto have resolved not to pursue any legal case on the matter. The parents who spoke with Bola Adewara of elifeonline.net said it would make no sense to start pursuing any legal case since according to them, “it won’t bring back the dead” 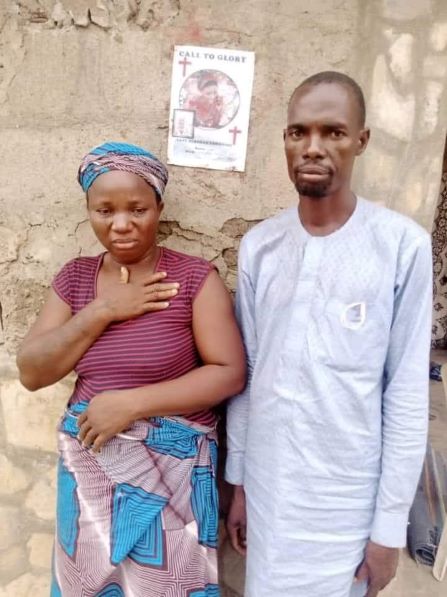 Garba Emmanuel and his wife

His father, Garba Emmanuel, said, “I am not going to court because if I do, it won’t bring her back. For three to four years, you are still in court. For what? I am not going to court. But if the government wants, they are free. She is an indigene of Nigeria. Government can decide to go to court to prosecute the offender as a deterrent for a reoccurrence. Government should handle it and punish the culprits so it would not happen again.”

In the interview with Adewara, he gave a graphic detail of how his daughter was murdered. He said the police officers who came to rescue her were overwhelmed by the crowd.

Jesus taught them to forgive

Also, Lara Owoeye-Wise, Special Adviser to the Deputy Senate President, Ovie Omo Agege in a Facebook post on Tuesday May 17 recounted her exchange with Deborah’s parents,

Hello friends,
I just got off the phone with the parents of Deborah.
Oh what faith
Oh what Grace
Magnanimous even in such indescribable pains.

Summary of our conversation;
They hold no ill feelings against those who killed their daughter
Jesus taught them to forgive
The gospel of Jesus has spread through the death of their daughter
The unbelievers are hearing about Jesus
They are overwhelmed by the show of sympathy and love from people all over the country
They are indeed grateful
They are holding up well
I tried to hold it together as we talked.
I have collected his account number and on second thought, I think everybody should drop whatever they have in it for him.
I have told him to expect little donations from Friends of Deborah and he is very grateful.
They prayed for me

Emmanuel Garba..2011079282.
First bank
Thank you all so very much for standing by this family.
Their prayers go with you all.
Thank you.
Several reactions have trailed the comment with many people commending Lara Owoeye-Wise for taking the initiative.
The parents confirmed in the www.elifeonline.net interview that the Christian community has been quite supportive and has shown a lot of solidarity since the incident happened.
On Monday, May 16 The General Overseer of Omega Power Ministry, Apostle Chibuzor Chinyere announced his readiness to grant all the siblings of the Deborah  Yakubu scholarship to study in OPM schools.
He made this known on Monday May 16 in a post via the Church’s official Facebook handle.The post reads: “I just watched a video clip where the parents of Deborah Samuel said they will not be sending their children to school again. GOD FORBID.

“Anyone with their contacts should inform them immediately that I Apostle Chibuzor Chinyere the General Overseas of OPM Church is relocating them to Port Harcourt.

“They will be staying in one of the OPM free estates where they will never pay rent forever. All their children are given automatic scholarships in OPM Free schools.

“I will get the father a job and I also open a shop for the mother”.

He urged those who know them to get in touch

It should be noted that there are discrepancies in the surname of Deborah. Her father bears Garba Emmanuel. But the Traveling Secretary of Fellowship of Christian Students for some of the states in the North, Evang Cyprian Ogah told Church Times that she bears Deborah Emmanuel Yakubu in school.  Ogah said he was on the team that interviewed her before she was appointed the sisters’ coordinator of the FCS in the school. He however said he only knew her for a brief period of time.

The Sheu Shagari College of Education is yet to make any official statement on the incident. It is not clear how the name Yakubu came about. Some also call her Deborah Samuel.