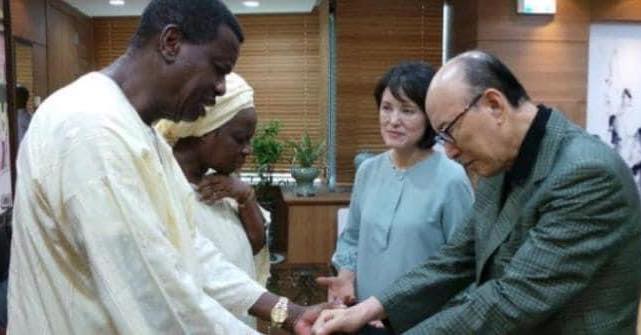 General Overseer of the Redeemed Christian Church of God, Pastor Enoch Adeboye has recalled his twin encounters with Pastor David Yonggi Cho who passed on recently at the age of 85.
Yonggi Cho was co-founder of the Yoido Full Gospel Church (Assemblies of God), the world’s largest single congregation church, with a claimed membership of 830,000 (as of 2007) according to Wikipedia.
Adeboye, in a tribute message on his Facebook message, said he had the opportunity of visiting South Korea on two different occasions.
One of the occasions was out of curiosity; to see the pastor of the largest church in the world then. The other occasion was on the invitation of Pastor Yonggi Cho himself.
He said,  Several years ago, I visited South Korea because I heard of a man who had the largest Church in the world.  He had a congregation of half a million people. By the time I visited him, he had an auditorium that could take approximately fifty thousand people.
“He was having seven services on Sundays. I heard him say in the service that we attended telling the members who came one Sunday to please not come back next Sunday; so that those who couldn’t come last Sunday can come next Sunday.
“I said God; so you can do this?”

Cho: My second encounter with him-Adeboye

The RCCG General Overseer however said some years ago he had the opportunity of meeting the same pastor. But it was on the invitation of Cho himself.
He wrote,  “Some years ago, I returned to South Korea, I had a meeting with the same man.
“The first time I was there, people like me could not come near the office. But this time around, I went to his office at his invitation. When we met; he said I have heard of you, will you please pray for me?
This was perhaps the last opportunity Pastor Adeboye met the well know pastor. He then wrote a last sentence  saying,  “Till we meet again on the resurrection morning, Rest in God’s presence Pastor Dr. David Yonggi”
0 comment 0 FacebookTwitterPinterestEmail