Trending Now
A “widow’s” lamentation and lessons for RCCG, others...
God’s word: A case for non-English speakers in...
Adeboye: Some women consider it privilege to sleep...
Despite challenges, God has been good to Nigerians...
Writers save lives, solve problems says Omotosho @...
Prince Harry’s book that hit 1.2m sales in...
Ex-Apola king, Idowu Animasawun celebrates 85th birthday with missions...
Nigeria can’t make progress if the Church is...
Peter Obi: I have not promised I will...
2023 elections and the imperative of divine timing
Home News Archbishop Joseph Ojo, a rugged soldier of Christ-Lagos PFN 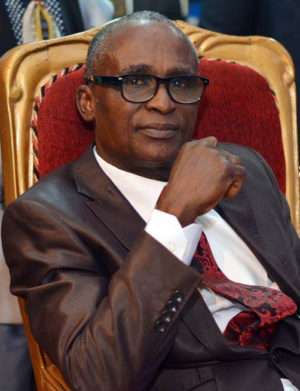 The Lagos chapter of the Pentecostal Fellowship of Nigeria has described the founder of Calvary Kingdom Church, Archbishop Joseph Ojo as a rugged soldier of Christ.

The fellowship noted that Ojo has remained consistent in faith over the years.

The chapter, in a statement signed by its chairman, Apostle Eyinnaya Okuwuonu, and its secretary Apostle Akin Akindejoye made the observation in a congratulatory message to Ojo on his church’s 20th anniversary.

The PFN states, “We celebrate your fatherly figure’s amiable nature, humility, and accessibility. Your dogged consistency and persistence as a rugged soldier of the cross, contending for the faith once delivered to the saints over the years, have made you a leader worthy of emulation.”

The fellowship prayed that the seed the Lord has used him to sow in the lives of people will be multiplied and that God will increase his greatness.

Archbishop Joseph Imariabe Ojo was born on April 18, 1949.  Until his conversion in 1972 an ardent and devoted member of the Roman Catholic Church.

He gave his life to Christ in 1972 during Archbishop Benson’s first crusade at Ogbe Stadium, Benin City. Ojo answered the call to full-time pastoral ministry in 1979. He proceeded to the USA first in 1983 and studied at the famous Christ for the Nations Institute in Dallas, Texas. He pastored several churches of the Church of God Mission founded by the late Archbishop Benson Idahosa.

Ojo was the right-hand man of Archbishop Idahosa. It was thought that he would succeed the late Archbishop but that was not to be. He however moved out of the church to start his own ministry a few years after the demise of Idahosa.