Trending Now
Adeboye: Some women consider it privilege to sleep...
Despite challenges, God has been good to Nigerians...
Writers save lives, solve problems says Omotosho @...
Prince Harry’s book that hit 1.2m sales in...
Ex-Apola king, Idowu Animasawun celebrates 85th birthday with missions...
Nigeria can’t make progress if the Church is...
Peter Obi: I have not promised I will...
2023 elections and the imperative of divine timing
RCCG announces Prof. Aboaba’s passage says “He is...
The Paternoster Code: Debunking the age-long misconceptions about...
Home Features The Apostolic Church Nigeria releases 2022 prophecies, says, “God will terrify Nigeria’s enemies” 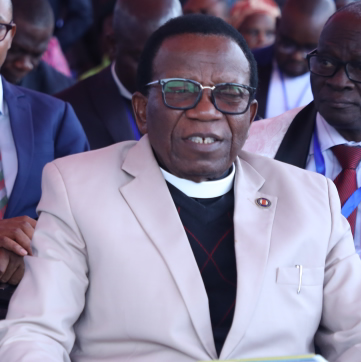 The Apostolic Church Nigeria has released its yearly prophecies for Nigeria and for the church. The high point of the prophecies is that God will terrify the enemies of Nigeria

The prophecies which also touched on many other issues were delivered during a Special Service on the first day of the year held at the church’s National Temple, Olorunda Ketu, Lagos.

The words of the prophecy on Nigeria read, “I will be great among you. I am great and higher above all principalities. My greatness will terrify the enemies of this country they will not be allowed to come, for I am great among my people.”

A YEAR OF YOUR PROMOTION

Pastor Awojide said that the Lord will open the door for testimonies of new things among his people as “this is a year of your promotion and your elevation”.

He added that some like Mordecai of old will take the seat of their enemy and others will be called from far away to come and occupy a new seat.

“Are you ready, to serve Me as your Lord God? For some of you who are partially outside the church and you are partially in the church, come in fullness to serve me in order to receive the blessing prepared for you,” saith the Lord.

In his own prophetic ministration, Pastor Olayemi said the mark to identify the new year called for the prayer of the children of God, adding “It calls for righteousness, holiness and protecting your salvation, saith the Lord”.

The prophecy told the saints to take note of the Lord’s messages unto them “for the journey of this year, because it will serve as a direction, as a manual that you will not partake in the trouble of this year.”

SIN ON THE ALTAR TO BE VISITED

The servants of God are told to listen to the Lord’s voice that “It is a year that sin on the altar will be visited, therefore those who are using their ways of life to block the revival of end-time should stop it because the day will reveal them, saith the Lord; And anyone caught, will be reproved”.

CHARGE TO MINISTERS CONCERNING THE FLOCK

“My flocks are to be led to my kingdom not to be led by you to hell. My flock is to be taken care of, to be cared for, yea, not to be eaten up, nor to be destroyed. My flock, my flock is to be brought closer to me especially those that are far off, not to be chased away from my house, saith the Lord, it is not the issue of whether I serve them or I do not serve, my allowance must be completed, saith the Lord.

“Heaven, heaven is wealthy enough to pay for your suffering in the ministry if you endure the heat of the day for me. Let them come in, don’t let them run from one denomination to the other; this is a great vision and it can accommodate them all, saith the Lord. I am not interested in seeing them singing the song of Zion in a strange land”.

The Lord further said “It is my will, that you all go as sons and daughters of the Glorious Vision to rebuild the fallen family altar of prayer. Because this has made my adversary be sending attacks to marriages, and the youths are passing through broken homes, and seeing this is not to my happiness”.

YOUTH TOLD TO HUMBLE THEMSELVES

The youth were called upon to humble themselves and be patient in the journey of this year because there are agents of mass killing over them in preparation for the year ahead.

NATION’S UNITY IS MY COVENANT

The Lord wanted the children of the Glorious Vision to stand with Him on the Nation’s unity, saying “that is the covenant I the creator of the Nation has made for the Nation”.

TAKE CARE OF YOURSELF

“Let my Holy Spirit lead your management, this is the journey you will pass through but, I will deliver you”.

Pastor S. S. Akala in his prophetic offering said this New Year, the Lord will revisit the saints with greater salvation, as He did the previous year delivering them from destruction, sudden death, and calamities.

Declaring Himself as the saviour of the nation, the Lord said he would deliver his people from “the anti-Christs” who are “regathering and mobilizing from afar off for a great attack over the nation”

The prophet revealed: “The year is full of dangers and perils; increase in crimes: armed robbery and kidnapping and ritual practices will increase. There is an ongoing plan of the enemies to even penetrate into the South-West for a great attack with serious bomb blast, and serious panicking. I will scatter, I will bombard, I will destroy all their gatherings, saith the Lord.

UNGODLY IN GOVT TO BE JUDGED, THE REDEEMED IS SAFE

“Undoubtedly many lives of the ungodly will perish suddenly. Even the ungodly in the government of the day will be visited for judgement, saith the Lord. But for you, as for you, my redeemed, who fear Me, I will preserve you, I will honor you, I will beautify you with my salvation. Only, sanctify and re-dedicate your lives in holiness and for my service, saith the Lord. Make my house, yea, the place and the security of your soul, saith the Lord.

CAUTION OVER FAKE DOCTRINE ABOUT TITHE

The Lord warned his redeemed against falling away through renouncing the truth of his doctrine on the payment of tithe and tithing as a spiritual constitution, saying that many have been listening to erroneous and fake doctrine going around them as many now refuse to pay their tithe, to bring comfort to my house and the workers in my vineyard.

“I proclaim to you all that you all rise up to support the work of the kingdom and the gospel of salvation, saith the Lord”.

A TOKEN OF REDEMPTION FOR ANOTHER YEAR

Pastor N. O. T. Akintola, who gave the first prophecy said the year for the redemption of the saints, and their year of great grace.

“As it not been written in the book of Psalms? “Why do the heathen rage, and people imagine a vain thing? The kings of the earth set themselves, and the rulers take counsel together, against the Lord, and His anointed, saying, Let us break their bands asunder, and cast away their cords from us. He that sitteth in heavens shall laugh: the Lord shall have them in derision.” (Psalm 2:1-4).

Listen, and listen carefully, I want to reveal this thing unto you today: The king that is reigning over the land; in the day of his coronation, a parcel was sent to him from a foreign nation, and wicked nation; and inside that parcel, there is a scroll, and this thing was written inside it; according to the measurement of the part of the land, and some dates were written in the scroll: the total number of the days is 2,829 days. And this is the interpretation; seven years, seven months, seven weeks, and seven days, out of the days of his reign that my name should be wiped away from the land. But I am jealous for Jerusalem and Zion with great jealousy and that is the reason why I disallowed them to fulfill their mission up till today.

But, hearken unto my voice, seven years and seven months will be completed this year, while the remaining seven weeks and seven days will be early next year: that foreign nation will arise this year to monitor the assignment commissioned to the king. Therefore, my people, you will use this year for the redemption of next year.

PRAYER AGAINST THE WICKED NATION

“Also, you will cry unto Me that I should send out My angels against that wicked nation, so that the second half of the year will not bring confusion, even to this land; that a day of darkness, I say, a day of total darkness will not swallow the glory of the land.

“The rest will I be revealing unto you concerning this but, I seal up the rest for now saith the Lord.

“It is my will that the spoilers should stop spoiling their brothers, because I will visit your land this year for good, and I will bring back all those things that your enemies have taken away from your hand.

SAVED BY GRACE: A poetic rendition of the salvation experience