Trending Now
Adeboye: Some women consider it privilege to sleep...
Despite challenges, God has been good to Nigerians...
Writers save lives, solve problems says Omotosho @...
Prince Harry’s book that hit 1.2m sales in...
Ex-Apola king, Idowu Animasawun celebrates 85th birthday with missions...
Nigeria can’t make progress if the Church is...
Peter Obi: I have not promised I will...
2023 elections and the imperative of divine timing
RCCG announces Prof. Aboaba’s passage says “He is...
The Paternoster Code: Debunking the age-long misconceptions about...
Home News 2023: New Anap poll on fate of presidential candidates sparks reactions
News 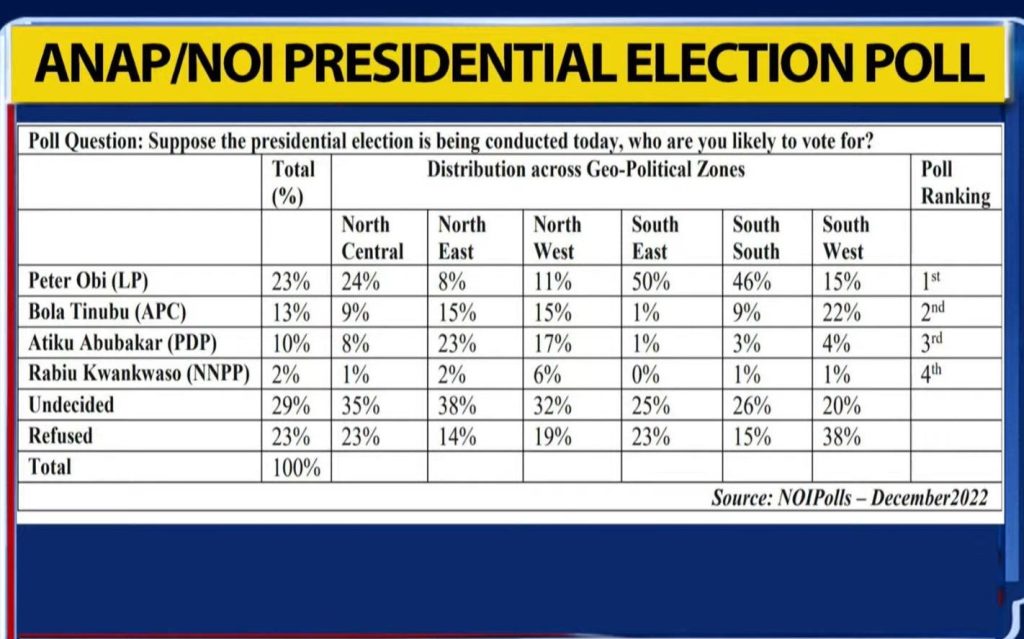 The outcome of the Anap poll

The December poll on the likely winner of the 2023 presidential election commissioned by the Anap Foundation has engendered different reactions online.

The President of Anap, Mr. Atedo Peterside who made this known on Channels Television said the exercise was conducted via the mobile phone.

That will be the second time such exercise would be conducted by the foundation. The first one which also put Obi in the lead was done in September.

But many respondents online shared divergent views about the poll. Some who were apparently sympathetic to Mr. Obi of the Labour Party welcomed the poll result. They expressed hope that it will be the reality come 2023. Many others dismissed it as an exercise that is not in tandem with reality.

Some derisively referred to Obi as online president. A number were concerned by the percentage of undecided voters and those who refused to vote which runs to 51 percent of the votes cast.

Yet, some referred to the foundation’s previous polls and how they had correctly predicted the outcomes of past elections in the country.

In the interview with Channels, Peterside said the election has moved from a three-horse race to a four-horse race according to the December poll. This is because of the coming up of Kwankwanso who polled 2 percent in the fresh poll released in December.

Comparing the December poll to that of September, Peterside said, “Nobody has gained or lost more than 2, 3 percent. I don’t know whether that is good news or bad news. But it is as if nothing has happened fundamentally, no significant shift,” he said.

He said that mobile phones were used  “is because of increased mobile phone penetration in the country.”

He acknowledged that a large percentage of people are undecided according to the poll adding however that the interest level in the next general elections is driven by economic challenges plaguing the nation, poverty, and insecurity, amongst others.

Peterside also noted that the youths have shown more interest in the coming elections.

Why we are backing CBN monetary policy-  Kaduna CAN chair