Trending Now
A “widow’s” lamentation and lessons for RCCG, others...
God’s word: A case for non-English speakers in...
Adeboye: Some women consider it privilege to sleep...
Despite challenges, God has been good to Nigerians...
Writers save lives, solve problems says Omotosho @...
Prince Harry’s book that hit 1.2m sales in...
Ex-Apola king, Idowu Animasawun celebrates 85th birthday with missions...
Nigeria can’t make progress if the Church is...
Peter Obi: I have not promised I will...
2023 elections and the imperative of divine timing
Home Features ALISON BECKER:  2019 best FIFA goalkeeper and his incredible faith in Jesus 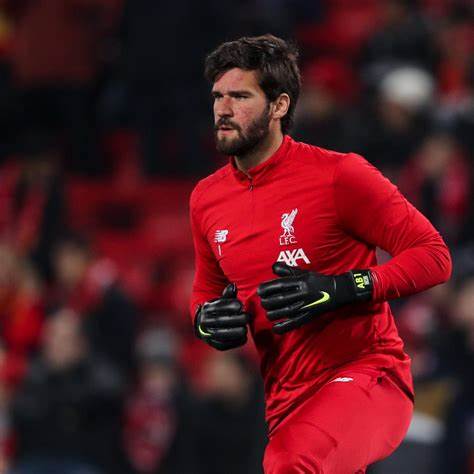 Twenty-nine-year-old Brazilian Goalkeeper ALISSON BECKER has proven himself over time to be a trusty pair of hands between keeping the post for his club side LIVERPOOL as well as keeping his faith.

Born on October 2, 1992, Becker is widely regarded to be one of the best goalkeepers ever. He has never been shy in expressing his Christian faith at any given time.

He was a one-time winner of the UEFA league and best FIFA goalkeeper award in 2019. When asked about his pre-match routine in an interview he said ‘’the only thing I do is to point to the sky. I am a Christian, so I am not a superstitious person. If you want to be a great goalkeeper, you need to work very hard. That’s what I do.

“You need to be very focused on football and I think faith is very important too. I believe in God, you know you have to do your best on the pitch and put love in everything you do in life.”

Becker has been so steadfast in faith that he earned the name ‘’ HOLY GOALIE’’ from his Dutch teammate Vigil Van Djik.

A devout Pentecostal Christian, Becker looks forward to becoming a priest after his football career.

He baptized the wife of his countryman and club side rival Fred Rodriguez of Manchester united in a private ceremony in a swimming pool. He was accompanied by a gospel singer as seen in the video posted on his social media platform.

Before that, Alisson had performed a baptism ceremony for his Brazilian teammate Robert Firmino. Both were on the verge of tears after the holy rite was performed.

Firmino wrote on his Instagram handle afterward,  ‘’ I gave you my failures. And the victories, I will give you too. My greatest title is your love, Jesus’’

Becker had also said in a Sky Sports interview, ‘’ Jesus is love, I can’t explain it. It is enough to trust, believe in him, and experience the Holy Spirit’’

How he shows off his love for Jesus

The Liverpool goalkeeper often shows off his love for Jesus when celebrating his side’s success and victory in the UEFA Champions League campaign.

After a convincing two-nil win against Tottenham Hotspurs, he stripped down to a T-Shirt with the inscription:  cross=love.

In the 2020/2021 English Premier season he scored a dramatic header against West Bromwich  Albion to earn his team invaluable points that kept their UEFA Champions League qualification hopes burning.

Becker had headed up the field in the fifth minute of injury time and met teammate Trent  Alexander-Arnold’s cross with a perfect header, making him the first goalkeeper to have scored a goal off a header in Premier League history. In the post-match conference, Allison acknowledged God’s impact on the goal.

‘’you can’t explain a lot of things in life. For me the only reason for those kinds of things is God. He put his hand on my head today and I am feeling really blessed ‘’

The Brazilian however in an interview with the Brazilian newspaper Folha De s Paulo corrected the notion of him being religious.

‘’ I’ll correct it a little, I am not religious. I am just a follower of Christ. When we talk about religiosity, it Is very much tied to traditions and factors that somewhat tarnish the rich history of Christianity. Jesus is much more than religion’’ said Alison Becker.

The two-time Copa America winner is living a life void of controversies, drama, and a career worthy of emulation. He is among the many footballer players to be vocal about their Christian faith.