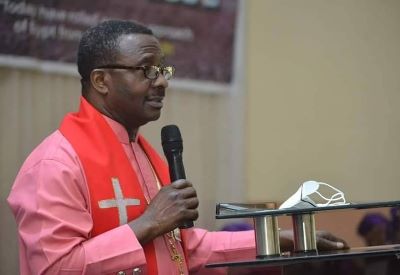 The Christian Association of Nigeria has denied reports that it has announced a new president.

The body in a statement by its spokesman, Pastor Bayo Oladeji said.however that the new president will be announced on Thursday July 28.

There have been media reports that The Most Revd Daniel Okoh of the  Christ Holy Church International has been announced the new president..

But Oladeji denied in the statement saying the process of electing a new president is yet to be concluded.

In a statement which was made available to Church Times, Oladeji said  ‘according to the CAN’s Constitution, Article 17 (9) viii-xi, the National Executive Council and the General Assembly must ratify the nomination of the candidate before the new President emerges.

‘So, the process is still ongoing and it will be completed on Thursday. It is true that the Most Rev Okoh has emerged the candidate from the Electoral College but this must be ratified by the National Executive Council and the General Assembly.’

He explains further that ‘according to Article 17 (9) (viii), “The candidate who secures majority vote of the Electoral College for each office shall be recommended to the National Executive Council.”

‘Article 17 (9) x states, “In the event that any candidate fails to secure the majority vote of the General Assembly, the procedure in paragraphs (4), (5), (6), and (8) herein shall be repeated by the Electoral College to reconsider the suitability or otherwise of all the candidates based upon the reasons adduced by those who opposed the candidature. The Electoral College may or may not substitute any candidate for any position based on majority vote of its members.”

He explained also that  Article 17 (9) xi states, “In the event of a deadlock in which case the candidate represented is rejected by the General Assembly, a combined meeting of the Electoral College and the President-in-Council of the Association will examine the issue(s) and make a final choice from all the nominated candidates for the office.”

He said  CAN is scheduled to hold its General Assembly on July 28 which is when the new President will be made known to the public.’

There are however indications.that the Most Revd Okoh may  eventually emerge the president of the Christian body.

The CAN had amended it’s constitution to a single five year term for every elected president . It has also rotated its  leadership among the five blocs that constitute the body.

The Organisation of African Independent Churches OAIC which Okoh belongs is expected to produce the next president.  Barring any odd, he may eventually be announced the president.