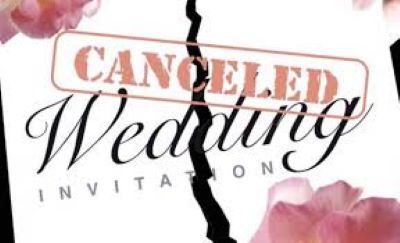 Not a few weddings had been aborted hours to solemnization as a result of vengeful or hurtful reactions by aggrieved partners over alleged acts of betrayal, unfaithfulness, or due to ominous signs of impending disaster if the relationship is consummated.

The gory experience has landed many jilted lovers in psychiatric hospitals while strong and resilient ones slid into depression and melancholy. They become moody, self-isolate, and sickly. It is a harrowing and bitter experience anyone could suffer as a result of a failed relationship.

It is shattering because hopes, expectations, and firm faith in the emerging future suddenly vamoosed into the thin air. Crashed hope and expelled optimism suddenly become the reality of once-upon-a-time excited spouses. The situation is better imagined than experienced.

Cancellation of the wedding at the last minute is the culmination of bottled-up unresolved issues by the aggrieved partner over a period of time. Usually, the signs would have been so obvious but the ‘trial and error approach which often leads to reluctant marriage are the reasons why courageous betrothed partners decide to call it off. Not a few marriages are marking time as plans and processes for divorce are quietly underway.

Previously, I have witnessed cases that were instigated by these factors. However, I still prefer the painful but sudden pre-wedding separation to failed marriages. Several people risked going into marriages that they knew right from the onset that would eventually fail just to save their faces.

About three months ago, a video went viral online about a couple who were on their way to the registry. They created a scene on the way as the bridegroom stopped his convoy, alighted from his car, and announced to his bride in the presence of his family, in-laws-to-be, and friends that he’s no longer interested in the wedding again.

The groom had played along over the months in order to disgrace his unfaithful fiancee at the most painful moment like the wedding day. The lanky groom, adorned in an ash colour suit said “Let me announce to you here and now that today’s wedding will never hold and it’s over between us.

Do you think I don’t know that you and this wicked guy who pretended to be my friend are sleeping together? (The video camera zoomed on the guy who covered his face in shame and briskly walked away from the scene. The bride, her chief bridesmaid, and friends were genuflecting begging for forgiveness while the bride’s father was aghast at the startling revelation about his daughter. What a shame!).” Despite appeals, the groom and his friends entered their cars and zoomed off leaving the bride in shame, pain, and regret. That was how the wedding was canceled at the last minute.

Sometimes in 1991, a wedding that was reluctantly solemnised despite convincing evidence of hardship and suffering waiting ahead eventually broke up 14 years after due to the same foreseeable reasons. According to the man, he said he had conviction beyond doubt that he should not have gone ahead with the wedding.

“Had it been that we had mobile phones at the time, I would have called my guests in their respective hotel rooms not to bother attending the early morning wedding service. I went ahead reluctantly despite the visible negative signs which pretend hardship, lack, and stagnation ahead. Today, I thank God for delivering me out of the marital slavery and wilderness. Meanwhile, 14 years is not a joke in a man’s life.”

That a marriage, produced children is not proof of divine approval or that the couples are meant to be. Several marriages came to being as products of lustful cravings, flings, or accidental copulations. Marriages birthed through infatuation stand the risk of becoming boring, acrimonious and it may fail as neglect, infidelity, and mutual dislike may characterize the union. Ruled by the spur of emotional excitement and amorous desires, such a union does not last beyond the preliminary stages. Marriage is a serious business that requires hard work to make it work.

“I know we won’t stay longer than necessary as he, too, has told me to move on. We stopped having sexual intimacy in 2018 November. I don’t ask about his movements anymore. There are days he would stay outside for almost a week. He doesn’t care if I go out also.

The only reason we haven’t blown it open is the children. They know that all is not well at home but we don’t want it to affect them that much by the time we separate. It will happen soon because I can’t continue making my life miserable because of a man who already has another home elsewhere.” This was the sad story of a woman in a reluctant marriage that called for counseling recently.

Common causes of last minutes cancellation of wedding include fear of the unknown due to constant clashes, attitudinal problems, and rigidity. Discovery of undisclosed scandals, grave lies or coverups, spiritual issues, bad parental background, and irreconcilable differences. Many people, contrary to their inner conviction, still went ahead to tie the knots only to regret later.

Attractiveness is a prime magnetic spell that is needed at the beginning of every relationship. Attractiveness is needed to sustain it through to consummation just as it is highly needed even more in the marriage to ward off temptations and curb indulgences.

The secret of happy couples is not there in material or financial prosperity perse but mostly in seeing themselves with the eyes of their youth. They keep the memory of their early days when making overtures to her and she was proving to be a hard nut to crack.

They enliven the memory of when she was the most sought-after babe in the school or in the community. Her brilliance, talent as an athlete or a singer or just being a visual delight because of her stunning beauty. They remember how lucky he was to gain her attention and when she subsequently said a “Yes” to him.

Read also: I married my husband in defiance of my parents’ wish but… Pastor Mrs. Ejechihttps://churchtimesnigeria.net/adebimpe-ejechi-husband/

How he felt on top of the world for having the object of his interest and desire right in his arms. Thinking about those early sweet days is a powerful tonic to sustain a marriage. Such a memory engenders forgiveness, strengthens love, and lessens acrimony.

Knowing that an average intelligent, faithful and beautiful woman will likely have an anger issue is a fact that should guide her man. A resourceful and hardworking woman may complain less but she could be difficult to persuade when she makes up her mind either to quit or refuse to undertake some supporting roles.

The irony of life is that it is those awesome, caring, and focused women that are unfortunately married to mean, selfish and irresponsible set of men. Some of such marriages failed because there is a limit to human endurance.

Wedding: When partners are incompatible

Only a few, if any at all, couples that went into marriage with palpable fear and verifiable indices of failure that come out it smiling. Risk-takers hardly succeed in marriage like they do in business. More than anything else, an aborted wedding is a lot better than a failed marriage. The scars and pressure linger for a long time, it could sometimes be a lifetime burden.

I will not hesitate to advise that one should quit a relationship or courtship that portends danger ahead when it is consummated. People should stop blaming their self-inflicted problems on God. Prayer alone is not enough in this matter. Jesus said “watch and pray” so that you won’t enter into problems. “Watch” comes before “prayer” according to Jesus. Therefore, watch carefully before you leap into marriage with a partner you’re not wholly convinced to marry.

What church overseers should do about unfruitful pastors- Prof. Sarumi