Trending Now
Adeboye: Some women consider it privilege to sleep...
Despite challenges, God has been good to Nigerians...
Writers save lives, solve problems says Omotosho @...
Prince Harry’s book that hit 1.2m sales in...
Ex-Apola king, Idowu Animasawun celebrates 85th birthday with missions...
Nigeria can’t make progress if the Church is...
Peter Obi: I have not promised I will...
2023 elections and the imperative of divine timing
RCCG announces Prof. Aboaba’s passage says “He is...
The Paternoster Code: Debunking the age-long misconceptions about...
Home News Ogunbomehin Foundation gives free medical service to over 300 Lagosians
News

About 300 Lagosians benefited from the free medical outreach carried out by Pastor Isaiah Ogunbomehin Foundation which held on July 21 and 22. It was the inaugural outing of the foundation. 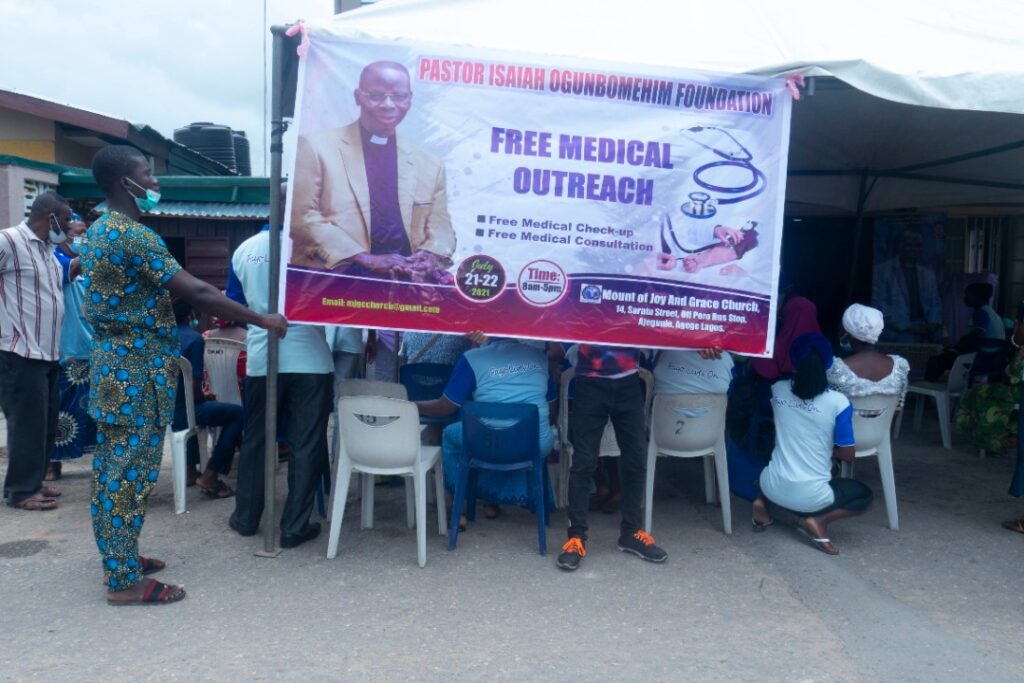 The foundation was instituted in memory of Pastor Ogunbomehin who died on July 21, 2019. Its goal is to support the less privileged

The late Pastor Ogunbomehin was the founder of Mount of Joy and Grace Church based in Agege, Lagos. He was also the pioneer builder of Christ Apostolic Church Joseph Babalola Camp located at Ikeji Arakeji, Osun State.

The foundation on July 21 and 22, made good its promise to render free medical service to Lagosians as a first step in impacting lives. 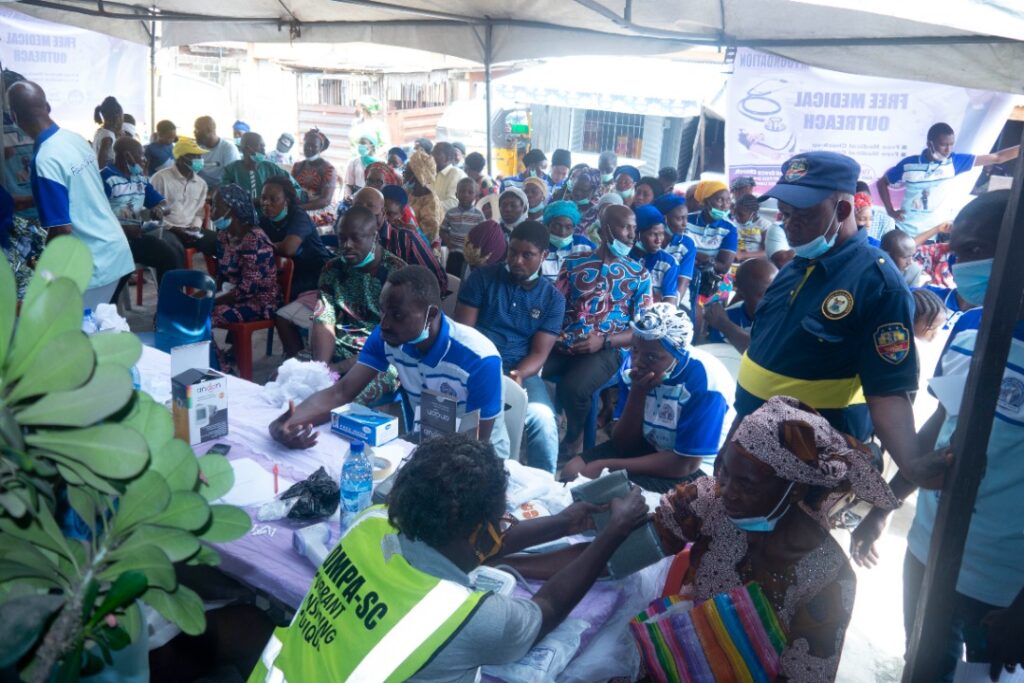 Both orthodox and natural medicine practitioners were on ground to render medical help to people around the church premises in Agege, Lagos.

The officer who led the team for the outreach, Mr. Oluyemi Daniel said about 160 Lagosians were given attention. The team of natural medicine practitioners also attended to about 150 Lagosians on July 21 and 22.

Daniel who disclosed that the team came on instruction from Dr. A. Akintayo of the Lagos Primary Health Care Centre said the foundation bought some of the medical kits used in carrying out the medical check-up.

Apart from carrying out basic tests on People, the team also rendered some counselling. “It turned out that only about 30 per cent of those who came for the service had issues with their health. The remaining 70 per cent are in good shape from the indices we used. 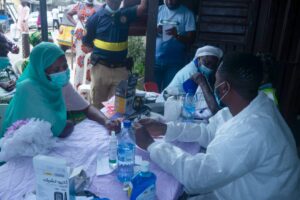 Medical officer at work during the outreach

What we did was to put them through basic health counselling. We gave some over-the-counter drugs to address some immediate concerns while they seek further medical treatment.  We checked their sugar level, BP and also checked their weight, height and also carried out general observation on all who came.” Said, Daniel.

One of the beneficiaries of the medical outreach, Mr. Mathew Adeniyi described the initiative as a great one. Adeniyi who lives in the neighbourhood of the church said the church has been a blessing to the community. He recalled when the founder was alive saying, “The man impacted us in this community. He paid the schools fees of indigent people. He paid house rents of people. He bought transformers for some communities.

“He gave out yearly Christmas gifts to the elderly in the community. I was a direct beneficiary of his kind heart. When my father died, the church did not hold service that day though he was not a member of the church. Pastor Ogunbemehin was also supporting my mother financially after my father passed on. He supported a lot of people and he truly lived the life of Christ.”

He expressed delight that the church he left behind has continued his legacy. “The medical outreach is a great initiative. I pray the church makes it a regular exercise. I have been truly blessed,” Adenyi said. 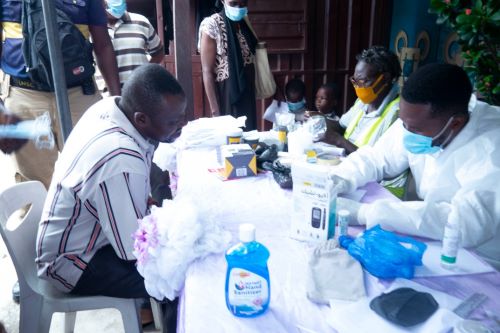 Pastor Seyi Ogunbomehin with the medical officers during the outreach

Pastor Seyi Ogunbomehin, Pastor of Mount of Joy and Grace Church, who succeeded the late founder said the last two years since his father passed on, has only proved that God is the owner of the work.

“God has shown us in the last two years that he is the one behind the work. Rather than go down, the church has been making great strides and progress. In fact, we made more progress during the covid-19 pandemic.

“My father’s death has not diminished us. Many of the members have come out stronger than before. Their spiritual lives have improved greatly. I can say we have improved greatly since his passing on. Members have been so supportive. They have not allowed God’s work to go down. He left a legacy that we are building on. We give glory to God.”

On the medical outreach, he said, “I want to thank God that we carried out the outreach. We discovered that some people were in terrible shape when checks were carried out on them. If some of them had passed on, we will be blaming some extraneous forces not knowing their negligence cost them their lives. But we thank God, all the same, they were able to know their health status so they could take action.” 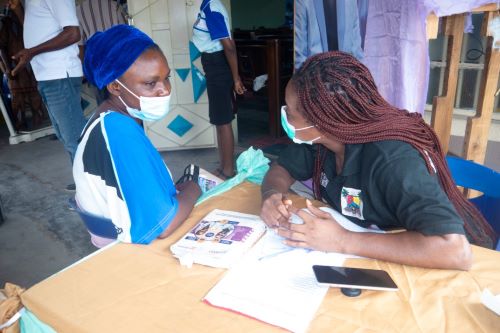 A counselling session going on during the outreach

He gave the instance of a brother who came with some health complications. “Upon examination, it was discovered that what he needed was food and not any medication. Meanwhile, this same brother had been to a church where they sentenced him to seven days dry fast for solution to his health challenge. He could not say no to the fast because he felt he would be disobeying God. When he was told, he needed to eat, he was so happy. It was like a heavy burden had been lifted from him,” said Pastor Ogunbomehin.

While acknowledging God’s great support and presence during the medical outreach, he said, “It’s a great miracle that it did not rain on the two days of the event. That was really encouraging.

“One of the medical officers despite being a Muslim gave tremendous assistance during the outreach. He was so excited about the event that he went the extra mile to ensure that the people are well attended to. The foundation will continue to make progress in that direction.“Our vision is to carry out more humanitarian work and bless the lives of people as God supplies the grace.”