Trending Now
Adeboye: Some women consider it privilege to sleep...
Despite challenges, God has been good to Nigerians...
Writers save lives, solve problems says Omotosho @...
Prince Harry’s book that hit 1.2m sales in...
Ex-Apola king, Idowu Animasawun celebrates 85th birthday with missions...
Nigeria can’t make progress if the Church is...
Peter Obi: I have not promised I will...
2023 elections and the imperative of divine timing
RCCG announces Prof. Aboaba’s passage says “He is...
The Paternoster Code: Debunking the age-long misconceptions about...
Home News Pastor’s son involved in internet fraud embraces  Jesus, explains how people are defrauded 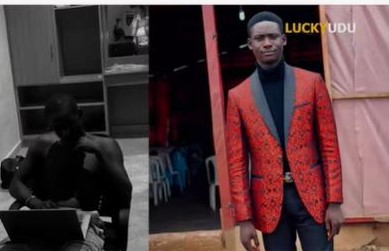 After four years of defrauding people online, a 22-year-old son of a pastor has surrendered his life to Christ saying “it is only God that can give everlasting joy.”

The ex-fraudster who gave his name as Moses Jonathan made this known in a Facebook video chat.

He said the fraudulent business was introduced to him by a friend in 2018 when he needed money desperately.

Moses who is skilled in photography and graphics said apart from being in need, the love of money made him take to crime.

From Graphics to Yahoo Yahoo

He said, “There was a particular day I edited a document for a friend and he paid me N5000. He then used the document to make about 3000 Euros using the internet. So, I told my friend to teach me how to do it since I was the one that edited the document.

“It was the graphic work devil used to lure me into internet fraud.  As a matter of fact, the devil uses money mainly to lure people into sin because that is what everybody is looking for. But one thing I know is that if you follow God, He can take care of your needs.”

His friend told him they have to go after greedy people online. All they needed was their phone and an Instagram account which he already had.

They would go into people’s inboxes and tell them to invest N50,000 and promise them 300 percent interest in two hours. Some people fell for the trick. After a while, he made his first cash of N300,000.

He said, “What we did was that when our victims send the money we will give them excuses for not paying the promised interest. We tell them the system was slow and that the network was bad. That is the reason we give for not sending their interest.

“Sometimes we tell them to refer people if they want their interest.”

Shortly after he graduated from school he started looking for foreigners online to dupe. He made it a full-time job and abandoned his photography and graphics.

He and his friends used the bitcoin platform to dupe a number of people.

“We would tell the white people to invest in bitcoin. We taught them how to invest in it. We collect their money. But we won’t do anything.  I did that for a long time but I did not get money from it as expected.

It was from there he began to hack into people’s accounts. “I tried to defraud a lady in the US.  I saw about 206,000 dollars in her account.

“All we could move out of the account was about 1000 dollars before the bank stopped us.

“The bank discovered and blocked our access. I noticed this when it reflected on my phone. That incident actually gave me more hope that there is money in this illegal business.

“Based on my graphic knowledge I could edit any document. There was no evidence you want that I could not produce.“ I would just edit it and send it to you. I did that for some time.”

Moses who was popular on TikTok stated further that after a while he made about 350 dollars around October last year after breaking into people’s accounts.  From there, he was making money consistently. That break launched him into a terrible lifestyle.

He began to smoke and was living on a fast lane. He was introduced to drugs that made him stay awake. Sometimes he and his friends would not sleep for three days because they wanted to dupe people online.

Unknown to him and his friends, they were dying.“I became very lean then. There was a time I was ashamed to come out because of my look”.

On whether he had to join a cult or use charm, he said “I have a Christian background. My late father was a pastor. The use of charm did not occur to me.”

Moses Jonathan now a preacher of the gospel

With time one pastor Ihosa stepped into his life. He knew he was into the fraudulent business. “Most times he called me and came to my house and we had midnight prayers together.

“I was praying because I thought the prayer would bring more money. I did not know it was his own way of drawing me to God.”

God used the prayers to bring Moses to God.

Narrating how he met the Lord, he said, “I actually quit fraud when I had an encounter with God. I met the Lord at a birthday party. After the party, I stayed back outside trying to take fresh air. I was smoking.

“Suddenly I felt as if somebody was sitting beside me saying, “Boy you are wasting away. You are a nobleman. But you are here wasting away your life. The voice reminded me of my life before I went into fraud and made me see that I was a noble person but that I was wasting away.”

Moses said the voice was irresistible. “There and then, I surrendered to Jesus” That was how I quit”

Today, Moses who is based in Edo State says he is better and happier. “There is a joy in me I can’t explain. When I don’t have anything in my account I still feel okay and joyful.

“Before my conversion, I could have a huge amount in my account and still not be happy.”

Moses says with some sense of certainty, “Today by God’s grace, I am born-again and I am now a pastor. I want to use my ministry to win souls most especially youth of this generation for Christ.”

Despite making so much from fraud, he said he was not a happy person. He spent the illegitimate money on frivolous things.

He counseled that many of those into internet fraud need more prayers. “In my case, it was the prayers of that pastor that I believe God used to liberate me.

“I will always counsel that we pray for anybody involved in fraud that God will open their eyes. It is only God that can deliver such people”

Moses currently pastors in the church his father left behind.

He says, ” When you follow God, he will meet all your needs. When I quit fraud many were wondering how I will make it.  Right now I am fully back doing my photography business and graphics. I also do car hire service.

“Those things have been fetching me money. But the happiness and joy I have in Christ are priceless. Some of my friends want to quit but they are afraid they won’t be able to survive. But I try to encourage them. What they don’t know is that the joy in Christ is priceless. What I am getting from Christ now is the best. Money can’t buy it.”

Adegbite never said, “God will punish us if we don’t vote Tinubu”-Lagos CAN

CAN to probe Bishop Adegbite, others on APC campaign council… Okoh distances self from list