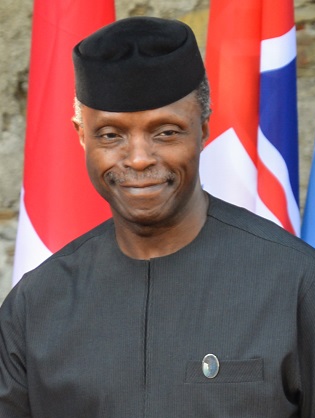 Vice President Yemi Osinbajo has expressed hope that Nigeria will overcome the forces that have subjugated it over the years.

He gave the assurance while speaking as a Special Guest of Honour at the 8th Sir Ahmadu Bello Foundation Memorial Lecture on Tuesday in Kano.

The theme of the lecture was, “Reviving the Northern Traditional Institutions: Imperative for Peace and Security in Northern Nigeria.”

Senior Special Assistant to the President on Media & Publicity Office of the Vice President, Mr Laolu Akande in a report quoted the VP as saying even though “the soul of the North, and of Nigeria by extension, is being contested by some of the most destructive and evil forces in contemporary history,” the Buhari Administration is firmly resolved to resist and defeat them.

Osinbajo assured that the government is poised to win the fight against these forces by God’s grace.

He stressed that the future of the unborn generation is not guaranteed if the forces are not checked adding that traditional institutions are “our first line of defence against the forces of anarchy.”

According to him, the Federal Government has deepened its partnership with traditional institutions on several fronts because of its resolve to put these forces in check.

He said, “given their familiarity with the local environment, traditional institutions are integral to our nationwide programme of community policing and can deliver valuable intelligence to State authorities.

“many communities, the military and law enforcement agencies are partnering with local age-grade groups, hunters, and various associations under the sanction of the traditional leadership.”

Osinbajo also assured that those who are being apprehended for terrorism and violent crimes are effectively prosecuted.

Prof. Osinbajo urged political and traditional leaders to shun divisive politics and sentiments in order to build a strong and stable society.

“There is an entire world out there calling to the potential of the young men and women not just of the North, but the whole of Nigeria. We owe it to them to see that they have ample opportunity to take their place in it. We have a duty to remind them of the values that define us, of the virtues of work and faith, tolerance and brotherliness. We owe them a duty to prepare them for a competitive world through knowledge acquisition and moral development.”

Prof. Osinbajo stated the task of promoting peaceful coexistence was “incumbent on traditional rulers in their domains as much as it is on elected leaders on all tiers of governance.”

The VP observed that positive things happen “when traditional institutions throw their moral weight behind progressive causes, whether it is educating the girl-child and getting out-of-school children into schools or championing the conservation of our environment and combating the ravages of drug abuse.

“These are all areas of concern for our administration and there is no doubt that we can prevail over these challenges if we work together.”

He added that “royal fathers have to be fathers of all in word and in deed. Our collective vision must be of an environment of peace, where the right to aspire and self-actualise is supported, irrespective of religion, gender or cultural identity. There is no place for exclusion or nativism. This understanding is at the heart of the consensus upon which we will anchor a peaceful and prosperous country.”

According to Prof. Osinbajo, the powerful role traditional institutions play in ensuring peace and security, as well as their influence on values embodied in society, are major principles the late Sardauna held dear.

The Vice President noted the qualities of Sir Ahmadu Bello, the Sardauna of Sokoto, whom he said has “a legacy of unifying the peoples of the North around a common purpose and the visionary pursuit of the actualisation of their individual and collective potential.

“As a Prince of Sokoto and a scion of the traditional institution, the Sardauna embodied the nexus between the ancient and the modern. He was a traditionalist with strong farsighted modernising instincts who understood that the key to the future lay in blending ancient values with progressive truths. As the Premier of the then Northern Region, he understood the necessity of inclusive governance in a plural environment.”

Describing him as a servant leader, the Vice President noted that the Sardauna was a pragmatic unifier who stood for the principles he held dear while respecting the diverse views of others.

The VP also commended the Emir of Lafia, HRH, Hon Justice Sidi Bage (Rtd), who was the Guest Speaker at the event, for “an informative, insightful, historical and contemporary review of law and policy on the role of Northern traditional institutions in the peace and security framework.”

He also commended the organisers, Sir Ahmadu Bello Memorial Foundation, for sustaining this important platform for constant introspection and action on national development.

In his remarks at the event, Kano State Governor Abdullahi Ganduje said Vice President Osinbajo has carved a niche for himself in the task of nation-building, national integration, “as well as remaining a bridge builder.”

With the Vice President and the Kano State Governor at the lecture were other dignitaries including the Plateau State Governor Mr Simon Lalong, the Deputy Governor of Nasarawa State, Dr Emmanuel Akabe; Member, House of Representatives, Hon. Hafiz Ibrahim; the Minister of Communication and Digital Economy, Dr Isa Pantami; the Sultan of Sokoto, His Eminence, Muhammadu Sa’ad Abubakar, and the Emir of Kano, His Royal Highness, Aminu Ado Bayero.

While in Kano, the Vice President reportedly received a rousing reception and cheers from the people of the State at several points on the road while on his way to pay condolence visits to the families of the former presidential candidate, late Dr. Bashir Tofa, renowned Islamic scholar, late Sheikh Ahmad Bamba of BUK and community leader, the late Alhaji Hassan Naif.

Speaking during a condolence visit to the family of late Dr Bashir Tofa, the Vice President described the late politician as “a very unique Nigerian who was a bridge builder, made friends, and built relationships across the country, and made serious contributions in discourse about the country and about national development.”

At the Tudun Yola Quarters Mosque where the renowned Islamic scholar, late Sheikh Ahmad Bamba BUK, resided, the VP, while praying for the deceased family, praised the late Sheik’s teachings, noting that his teachings were “of peace, brotherliness, fairness and justice,” describing him as one of the best known Sunni scholars in the world.

Condoling with the family of the late community leader, Alhaji Hassan Naif, the Vice President urged the family members to preserve the good deeds of their father, stating that “the legacy is one that must be cherished and one that you must promote in every possible way. The legacy of peace and brotherhood with everyone, the legacy of community service.”

Practical ways to handle grief and the attendant pain by Dr. Olayinka Dada