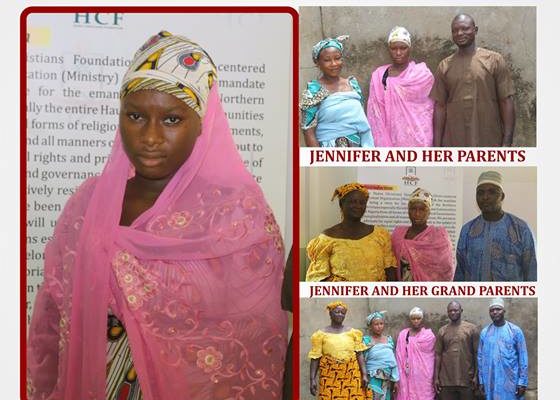 The Hausa Christian Foundation Nigeria has announced the freedom of Jennifer Yohanna who was abducted  on January 1 2018 and forcefully converted to Islam from the hands of her abductors.

The freedom of Jennifer who is currently pregnant was effected by the joint efforts of the partners of the foundation and the Kaduna State Police Command according to an unsigned statement by the foundation.

The foundation traced the plight of the Yohannas to when Blessing, sister of the head of the family, Mr. Mathew Yohanna was kidnapped in 2016 and converted to Islam by some Muslims of Pambegua in Kubau LGA, Kaduna State Nigeria.

Despite all the threats and harassment he faced, Yohanna insisted on the return of his sister. He was able to secure her freedom with the help of the then Divisional Police Officer of Pambegua, Kaduna after 21 days in captivity.

Not long after the kidnap and release of Blessing, one Abubakar Salisu according to the foundation’s statement hatched another plot to torment the entire Yohanna family. This time they came for his daughter on January 1 2018 in keeping to their threat to deal with Yohanna for daring to effect the release of Blessing, his sister.

The intention according to the statement of the foundation was to “forcefully convert her to Islam, abuse, molest and treat her as a sex slave and then marry her off to another Muslim against her wish…”

Pronto, Yohanna  contacted the Divisional Police Station of Pambegua but he met a brickwall. He then reported the matter to the Zaria Area Police Command which made her release possible after 15 days on the condition that he would allow her daughter to practice Islam.”

She was allowed to return to her parents nonetheless but her named had been changed to Zainab. She had been hypnotized and had threatened to do Jihad on her mother, because according to her, that was what they asked her to do.

On observing the condition of his daughter, Yohanna took her to a rehabilitation home. But the Islamic assailants would not let her be. The statement informed further, “That very night she went for the rehab one Muslim cleric from Zaria by name Mallam Abdullahi Baba of JIBWIS mobilized more than thirty Islamic militants and stormed Yohanna’s residence shouting and asking for the return of Jennifer or face the consequences. They continued until around 2am midnight. When they discovered that Jennifer was not at home, they left. Jennifer stayed at the rehab center for two weeks because of the terrible condition she came back with.

“When Jennifer returned from the rehab center to be with her family on 1st February 2018, in the middle of the night, Mr Yohanna’s brother who is a Muslim connived with some of the Muslims and came and took Jennifer out of the house through the window of her grandmother where she sleeps, without her parent’s knowledge. That was the last time Mr. Yohanna Matthew Shagari and his family saw their daughter before her recent release.”

Since February, the Yohannas have had to move from one government authority to the other to help effect the release of their daughter all to no avail.

After much praying, Jennifer reportedly returned home on Wednesday 14th June, 2018, “But some Muslim women came and forced her back to where she was kept and married to. When her mother was informed of what’s going on, she went to the place to see her daughter who by this time was ready to follow her  home though she had become pregnant for one of her abductors.”

But the unexpected happened again. The foundation informs, “When they were coming back home, the Muslim youths came in mass and beat up the mother to collect back Jennifer and then Mr. Yohanna came and rushed into the house to rescue his wife and his daughter. The youths overpowered him, beat him up as well and forcefully dragged Jennifer back. On seeing the situation of things, Jennifer’s parents had no option but to return home without their daughter.”

The youths, according to the statement of the foundation threatened to kill Yohanna for daring to come for his daughter whom they said had become Muslim.

But reprieve came their way when the matter was reported to the Hausa Christian Foundation. The foundation swung into action and ensured that Jennifer was released and reunited back to her family a few days ago through the intervention of the Kaduna State Police command.

The Hausa Christian Foundation expressed joy that efforts to bring Jennifer home was fruitful charging churches to enlighten and empower their members with the necessary information to secure the lives of women especially Christian Girls.

The Hausa Christian Foundation according to the statement is willing at any time to speak and enlighten any Church or Christian group on how best to live in Northern Nigeria especially in a time like this.