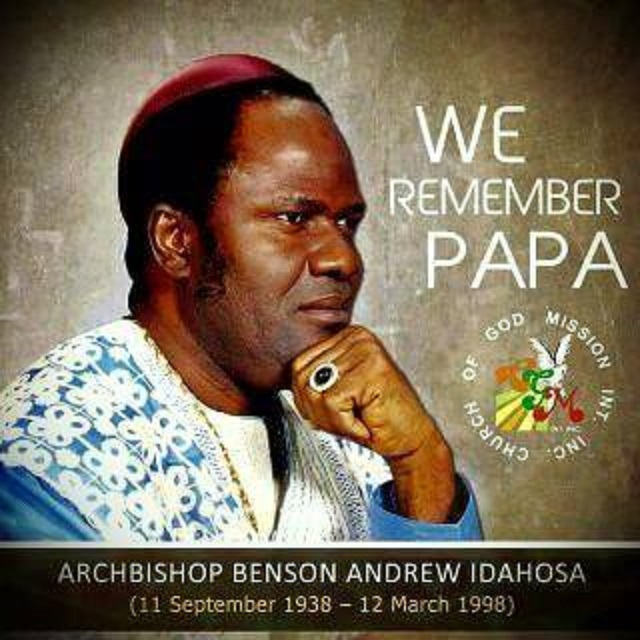 Proteges of the late founder of the Church of God Mission, Archbishop Benson Idahosa will on September 8 and 9   gather for a life-impacting conference tagged, “Sons of Idahosa Conference”

The theme is ‘Idahosa’s Legacies…keeping the fire’. It would hold at the Church of God Mission Faith Arena, Benin City, Edo State.

The conference is being put together by the Alumni Association of All Nations for Christ Bible Institute also known as AA Global.

The conference which comes with no registration fee is the first of its kind since the transition of Idahosa in 1998.

Would-be participants at the conference are encouraged to register by visiting http://www.sobiconline.org

He was a Charismatic Pentecostal preacher with notable signs and wonders.  And was popularly referred to as the father of Pentecostalism in Nigeria.

Apart from the Church of God Mission, he founded Benson Idahosa University. He also founded the All Nation for Christ Bible Institute. The institute which was established in 1969 has produced well over 20,000 graduates spread across the globe.

During his lifetime, Benson Idahosa had many proteges. Many of the evangelical and charismatic preachers of note today were nurtured and raised by him.

Some of them include Pastor Ayo Oritsejafor,  Archbishop Duncan Williams, Apostle Zilly Aggrey, Archbishop Joseph Ojo, and thousands of others.

Pastor Oristejafor, former President of the Christian Association and founder of Word of Life Bible Church Warri, Delta State had during the week called on those whose lives have been impacted by the late Archbishop to attend the conference.

Secretary of AA Global, Vivian Akinyosoye, said in a statement that Oritsejafor made the call while receiving the President of Benson Idahosa University, Bishop FEB Idahosa, his wife Laurie and members of the AA Global.

Oritsejafor was quoted as saying,  ‘’If a river forgets its source, it will dry up. I want to say to you if you want to experience your full potential you must wake up that part of you that connects to this great man.

“Because I don’t know of anybody that ever had contact with him and remained the same. It is just impossible. You couldn’t be around him and not be affected. He would affect you. ‘’

The conference will kick-start a movement

Oritsejafor said the conference will kick-start what can best be described as a movement.

According to him, a new wave of the spread of the Gospel will be ignited as the Church wakes up to its responsibilities as change agents in society.

He said Idahosa’s legacies and impact will be felt by generations.  ‘’I think the time has come for us to say we remember him, for his impact. And we want to stand for what is truthful. We want to carry what he was carrying, we want to continue from where he stopped.

“We want to say, the Gospel cannot stop and will not stop. I tell you from my heart, I feel fired up right now. I want to be able to do much more than I ever did.’’  Oritsejafor was quoted as saying.

Purpose of the event

The event is aimed at bringing together those whose lives have been impacted directly or indirectly by the late cleric so his voice could be heard again.

From Nigeria, Archbishop Joseph Ojo, Archbishop Sam Amagha, Bishop Simeon Okha,  Bishop FEB Idahosa, Reverend Dr. Nkechi Anayo – Iloputaife, and other great men and women of God within and outside Nigeria will feature during the conference.

Our position on 2023-Lagos PFN…unveils plan for societal transformation