Trending Now
Adeboye: Some women consider it privilege to sleep...
Despite challenges, God has been good to Nigerians...
Writers save lives, solve problems says Omotosho @...
Prince Harry’s book that hit 1.2m sales in...
Ex-Apola king, Idowu Animasawun celebrates 85th birthday with missions...
Nigeria can’t make progress if the Church is...
Peter Obi: I have not promised I will...
2023 elections and the imperative of divine timing
RCCG announces Prof. Aboaba’s passage says “He is...
The Paternoster Code: Debunking the age-long misconceptions about...
Home Columnist Ending the Unroyal Squabbles at Ooni’s Palace By Michael West
Columnist 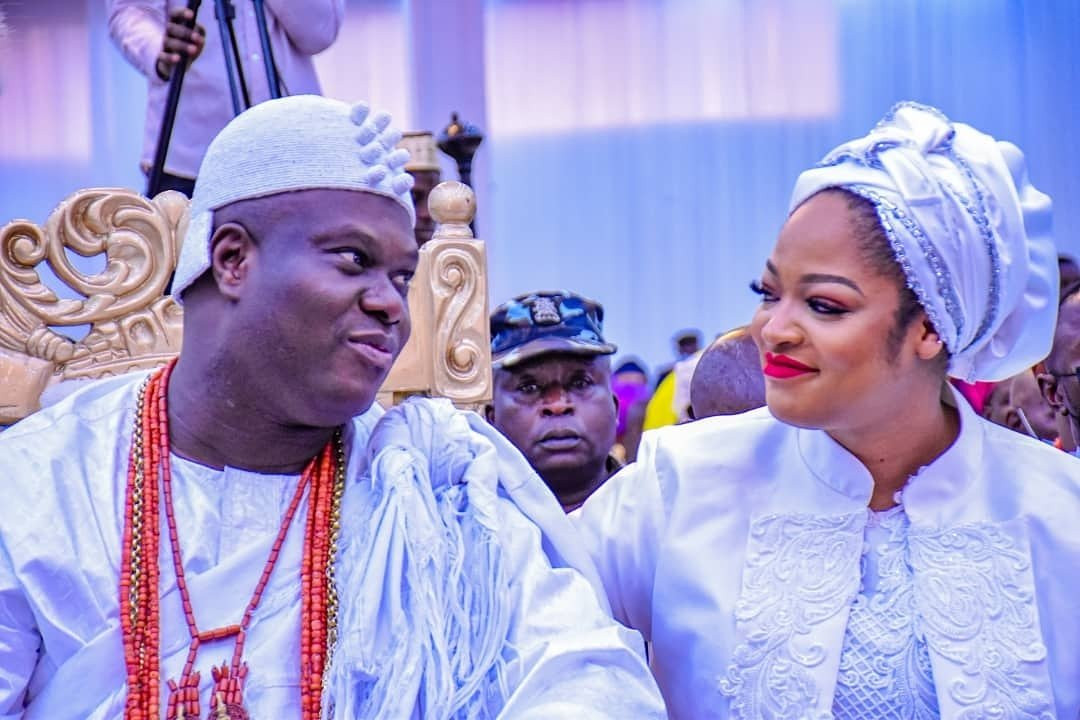 Considering the messy and scandalous level the controversy generated by the separation announced by Queen Naomi has assumed especially on social media, I think His Majesty, Oba Adeyeye Eniitan Ogunwusi, should back off and allow Queen Naomi Silekunola to go away. I propose this as my humble and sincere counsel for the royal father in order to preserve the dignity and sacredness of the highly treasured throne of Arole Oodua.

The controversy keeps mutating and rolling in the orbit of rumoured accusations and counter-accusations between the two camps. While those on the side of the throne heap blame on the Queen and her family members for alleged unruly and fraudulent behaviours, those who are sympathetic to the beautiful Queen are blaming the Kabiyesi, his sisters and the palace clique of “jealous” oloris for the unconventional behaviour by Queen Naomi. I don’t want to recapitulate the dirty details and gossips flying all over social media about the dispute since none of the rumoured allegations has been verified or made official by the disputing parties.

To start with, Queen Naomi erred! She committed a big blunder by first externalizing what was supposed to be a family issue. Going on social media to announce her separation from the throne is antithetical to African culture and tradition. Her action has caused a big stir in the palace. In the first place, she ought to know that marrying an oba, the most revered monarch in Yorubaland for that matter, is not going to be a normal marital deal like she would possibly have with any other man out there.

Queen Naomi, by the virtue of marrying the Ooni, has become the royal mother of the Yoruba people. Her position is so valued and celebrated that she can’t just do whatever she likes. Becoming the Queen is tantamount to sacrificing her privacy, social life, and, to a large extent, her missionary assignment for the throne. That is why some people are insinuating that perhaps she was enamoured with the opulence, prestige and benefits attached to the throne.

I refuse to debate this though; because she is not available to defend herself. One thing I desire to know is whether she received divine approval for her marriage to the Ooni. We have cases where good believers have married obas successfully without denying the faith. However,  such women are not gospel ministers like Queen Naomi.

This is why many Christians disapprove of her marriage to Ooni in the first place. “Knowing what it entails to be a Queen to a deep-rooted traditional throne like that of Ooni is practically irreconcilable with her faith and calling as a minister of God.

If she has left on the basis of her faith, it would have been a different matter altogether.” A female gospel minister has said in her comment. And since the Queen has not made it public if she had divine leading to go into the marriage or not, it will be preposterous for anybody to assume what nobody is sure of.

From the snippets obtained from sources, Queen Naomi might have been wrongly advised to act in an unroyal manner by those she listens to. Apparently, she’s now overwhelmed by the turn of events which is contrary to her expectation. I perceive the Queen to be a strong-willed young woman. I have been conscious of her strong personality way back at the beginning of her marriage.

While speaking, her tone and choice of words depict a bold and intelligent personality. Her beauty and calling as a missionary ostensibly fleece over her real person. She is not disrespectful but fearless and vocal. I have never met or encountered her one-on-one but the unfolding scenario seems to lend credence to my opinion and perception of the Queen. Initially, she may not have envisaged the ensued uproars trailing her separation, but when the issue became festered, she’s scared of her missteps and the manner in which she handles the matter.

As it is now, the public is aware of deft moves to reconcile her with the Ooni. But I want to sincerely advise her not to return to the palace no matter the pressure. Regardless of who is involved in the peacemaking efforts, if she truly loves herself, she should agree to any arrangement that would engender a lasting peace and forgiveness but exclude returning to the palace. Returning to the palace might not be in her best interest, and it should not be part of the conditions for peace and forgiveness. His Royal Majesty should please let go.

The mess is too much for the throne

He should also plead with those who may feel slighted by her action to please forgive the ‘uninitiated’ Queen from their hearts so she can live her life in peace. It is feared that the traditional high command in Ile Ife may want to ‘discipline’ the Queen in their own way. Kabiyesi and Ile Ife traditionalists should consider the grace of the crown and the interest of the prince, Tadenikawo, and let go.

The mess is too much for the throne such that her return cannot atone for the violation of palace rules which could mean a passive affront on the royalty. In fact, Kabiyesi should demonstrate his love for the Queen by not bringing her back to the palace. Instead, he should be more concerned with protecting and preserving the dignity of the throne. This suggestion is to protect the Queen from the backlash of her action, as well as for the sanctity of the ancient throne.

The whole issue is basically marital. Gossips, lies and disparaging stories flying all over the place should be ignored. Going forward, Ooni Eniitan Ogunwusi should please allow due diligence to be executed in the choices of new oloris. Cases of desertion and acrimony in the palace are not adding credit to the image of the throne. I see this as a challenge in the life of the monarch.

This is the time to support him and not to vilify or harshly criticize him for his choices and the manner in which the women were quitting. This is a serious challenge that requires the intervention of the elders. In the time past, apart from the wife or wives an oba already had before ascending the throne, many other wives came in as ‘gifts’ or through matchmaking; yet, the women were made to go through the rigours of screening and spiritual purification as prerequisites to qualify as oloris.

Ooni Eniitan Ogunwusi is a cross-bearer in this respect. He is not the only traditional ruler that keeps a harem of women in his palace. It is their norm. The fact that it is becoming an issue for him should rather be a source of concern than attracting scathing remarks or reprimands.

I want to conclude by advising Queen Naomi to embark on a prayer retreat in order to rediscover herself and realign with her assignments and purpose. She should watch videos, listen to online conversations and read diverse stories and gossips about her family members. I’m not sure everything said about them is true but she should frontally address and work on the areas that she knows are dishonouring.

It will be disappointing if some of the things said about her family members are true. If and when another opportunity presents itself for her, she would handle things differently knowing that she’s the one going into marriage and not her entire family. Let them remain, respectful in-laws, they ought to be without constituting any problem to her life again.

Re: Bad Marriage: ‘Why We‘re Scared to Quit!‘

May God deliver everyone in the prison of a bad marriage. May He give them the courage, strength, wisdom, ability, boldness, resources, and everything they need to break free from the prisons. And for the captors, an end shall come upon their activities and set their captives free in Jesus’ name. – Becky Olorunpomi, Lagos.

Many crazy women who would not allow their husbands to sleep at night by tormenting them with endless quarrel and nagging are the ones you are defending. Please let’s not make it look as if men are the only problem. – Chief Emo Diadenaru.

President Buhari, the futurologists and my experience with a young prophet by Femi Adesina