Trending Now
Adeboye: Some women consider it privilege to sleep...
Despite challenges, God has been good to Nigerians...
Writers save lives, solve problems says Omotosho @...
Prince Harry’s book that hit 1.2m sales in...
Ex-Apola king, Idowu Animasawun celebrates 85th birthday with missions...
Nigeria can’t make progress if the Church is...
Peter Obi: I have not promised I will...
2023 elections and the imperative of divine timing
RCCG announces Prof. Aboaba’s passage says “He is...
The Paternoster Code: Debunking the age-long misconceptions about...
Home Features Day Fulani herdsmen tried to charm me- Evangelist Onu
FeaturesMissionsOur Pastors

There is every reason for evangelist Sunday Onu not to work among the Fulani tribe. He is an Igbo, a trailer driver, and was never a pastor. But God literarily pulled him to the mission field.

His calling is a sort of replay of what transpired between Moses and God at the sight of the burning bush.  All Moses’ excuses were not tenable before God; so were Onu’s excuses. He also shares Jonah’s experience.

“My story is akin to that of Jonah, when God called me to go to the mission field, he specifically called me to work among the Fulanis. But I saw it as an impossible task because I’m not a northerner and I did not understand the language of the people. That was the excuse I gave God. But God told me that when the Europeans brought the gospel that they did not understand our language so I had no excuse. God also opened my eyes to what happened on the day of Pentecost that the apostles spoke in different languages”

But all that did not convince Onu to obey God. He literarily ran away from God’s presence until a strange sickness struck him and he was paralysed. “I was sick and could not walk for one year. It got to a point that it was clear to me that my disobedience was the cause of my problem. One day in the afternoon four people came to my house to invite me to a programme and I prayed to God that if he would heal me I would obey him and that was it. That day I came back to my feet”

The journey to the mission world which started in 2006 has been exciting “Now some of the Fulanis stay with me. I normally go to see some of them in the bush and we have been carrying out outreaches across a few states in the country among the Fulani tribe.”

How they tried to harm Evang. Onu 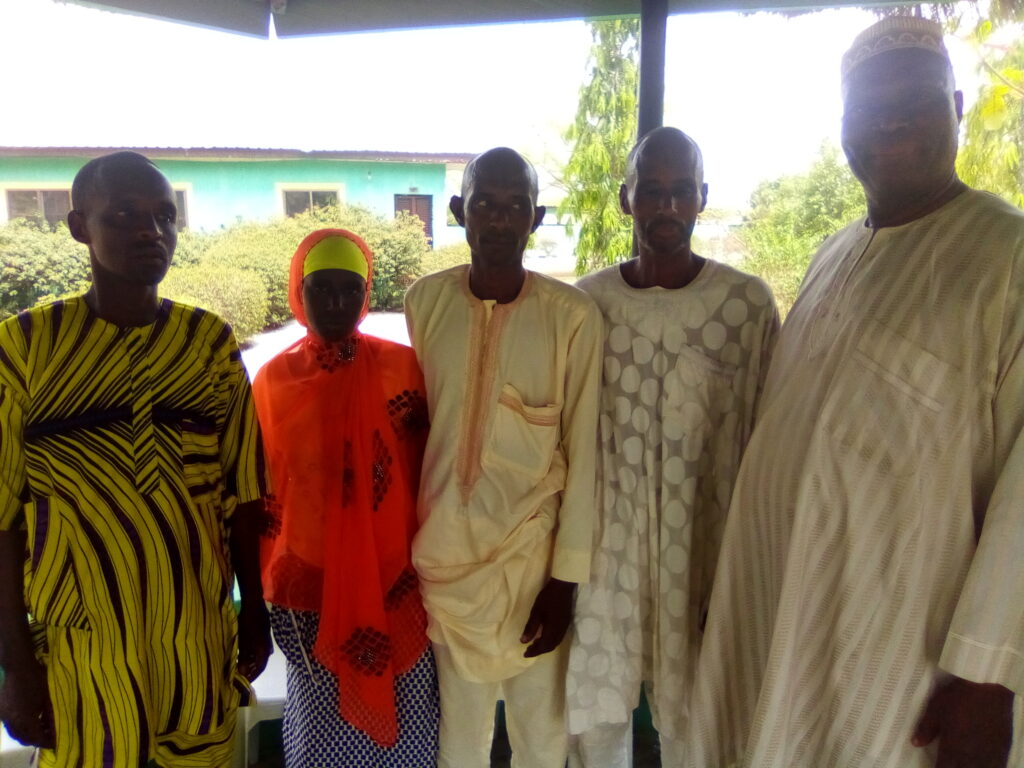 Evangelist Sunday Onu first from right with some of his converts

Though the journey has been an exciting one, Onu whose ministry is Burning Bush Ministry would not forget easily how they tried to use charm on him in one of the outreaches he had. “There was a particular time I wondered in the bush and got a settlement where the Fulanis were. As I was about preaching to them one of them asked me to sit under a tree but the rest of them were in a hut using charm on me by some sort of remote control. Suddenly the branch of the tree started peeling off and dropping.

“The tree was about crashing on me when I stepped away from there. They knew what they had done.  One of them later came out to tell me to go and never to come back again. I was annoyed. God spoke to me that he saved me from a battle that instead of me thanking Him that I was annoyed. I asked for forgiveness and appreciated God. Shortly after I moved away from there I saw another settlement and I shared the gospel with them. They were receptive to the gospel. And that gave me a lot of joy”

Despite the harrowing experience, Onu says he has not for once nursed any fear of being killed. “If you believe that God has called you there is nothing to fear. The way God gave me grace I don’t have any fear. It got to a point that they are the ones afraid of me because they see the glory of God in my life. Jesus says go into the world and preach the gospel and he did not talk about coming back. If I die I have only changed address.”

The fear of encountering wild animals in the bush does not also arise. He says, “Cows have a natural ability to ward off wild animals. Anywhere they stay they drive away many things. Wild animals don’t like disturbance. Where many cows pass you cannot find a snake there for instance because cows have natural shoes so snakes don’t go near them. I have not encountered any wild animal since I began this ministry.”

On the perceived crisis caused by the Fulanis in Plateau, Onu says, “The problem in Jos for instance is caused by farmland and their cattle. The Fulanis are not so much interested in taking over people’s land they are after the grasses. They value their animals more than the farmland. When their animals enter your farm they don’t care and that could bring misunderstanding. And for you to hurt their cow they will not take it lightly.”

He says of the Fulanis, “While you are trying to understand the average Fulani man, he is also studying you. They can pretend as if they don’t know anything but they know a lot. They are good at keeping secrets. They are straightforward and plain. We think they are hostile but that has to do with our mindset. They carry sticks and knives because of their animals. They value their cattle so much and they would not tolerate it if you try to harm them”

Though an Anglican, Onu says he tries to de-emphasise denomination because according to him, “it is a big barrier to mission work. Mission agencies are so careful about interfering with the work that is being done by another denomination. They only relate with independent people.”

What then happens to his converts, “What we normally do is that we advise them to go to churches around where they have their cattles. Some of them still follow me to church especially those who live with me. My own job is to disciple them so that they too can go into the field. We are making progress in that area. There are a lot of other agencies doing what I am doing.”

On the immediate need of the mission Onu who said he has recorded some amazing conversions among the Fulanis solicits the assistance of Christians for the cause of the work, “right now we need one double cabin pick-up van to enhance mobility and accommodation for some of the converts. We also need prayer partners to stand in the gap while the work is on, one sony DVD laptop player, a generator set, and a projector. All these are needed during outreaches.”

If God is leading you to be a blessing to the Burning Bush Ministry you can contact evangelist Onu on 08039720974 or visit his office at no 78 Yepwi Street New Karu in Karu Local Government Area of Nasarawa State or email burningbushoutreach@gmail.com orburningbushoutreach@yahoo.com

Our lives as deaf and dumb couple

A missionary is like a hunter in the bush-Adesina