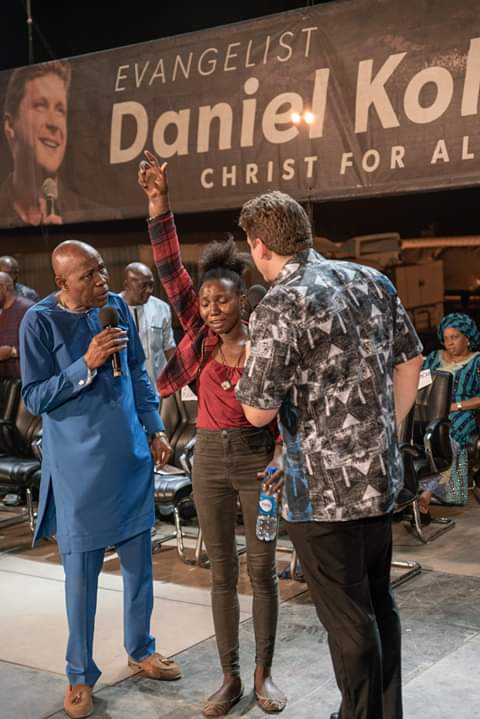 Kolenda during the Warri Crusade

It is the first crusade he would hold after the death of Evangelist Reinhard Bonnke’s whom he took over from at the Christ For All Nations Ministry.

Recounting his experience in a Facebook post, Kolenda said the missionary journey that members of the team have embarked on in recent times has been quite daunting.

He however noted that God has demonstrated His faithfulness adding that “members of the team have shown great dedication and commitment in driving the vision of the CFAN.”

He said, ‘I have seen a level of commitment and perseverance that is difficult to grasp unless you’re here to witness it. We have all had a thousand good reasons to turn back. But every last one pressed forward without wavering.’

On the experience in recent time, he said, ‘These have been the most challenging travel conditions any of us have ever seen. Even our travel agent said in her 25-years of doing her job, she’s never seen anything like it.

Daniel Kolenda: The enthusiasm is great

‘This morning our last connection was canceled yet again, so we piled into cars/vans and drove for 8-hours. We finally arrived by car in Warri, Nigeria for the Gospel Crusade just minutes before it began.

‘This is the first crusade of the year. And the first one held since Evangelist Bonnke’s passing. But I am sure, he is smiling in heaven to see that we are still persevering against all odds for the sake of the Gospel.’

‘Obviously, they had been part of the convoy that was traveling for days and arrived in Warri just as the crusade was starting.

‘I know they were tired, but they led with passion. They were powerful and anointed and led us all into the presence of God.

‘I must admit, I felt like I was In a daze all night from sheer exhaustion. Even now as I write, it’s all I can do to keep my eyes open. Yet, despite my personal physical weakness, God moved powerfully tonight.’

On the experience at his first day in the crusade, he said, ‘ Many thousands responded to the Gospel, deaf ears opened, a bullet lodged in a man’s chest from a gunshot disappeared, a man’s hernia was healed and many other miracles took place – much more than we could interview.’

He said ‘tomorrow, we will begin again with renewed strength. Please continue to pray for us and for Warri’

Solutions to world’s deepest problem lies with the gospel -Osinbajo

Man of God thank you for bringing healing, deliverance, breakthrough, restoration and above all salvation to our land may the good Lord richly reward you and your team and grant you smooth and safe flight back to your country in Jesus name amen