Trending Now
A “widow’s” lamentation and lessons for RCCG, others...
God’s word: A case for non-English speakers in...
Adeboye: Some women consider it privilege to sleep...
Despite challenges, God has been good to Nigerians...
Writers save lives, solve problems says Omotosho @...
Prince Harry’s book that hit 1.2m sales in...
Ex-Apola king, Idowu Animasawun celebrates 85th birthday with missions...
Nigeria can’t make progress if the Church is...
Peter Obi: I have not promised I will...
2023 elections and the imperative of divine timing
Home Columnist Like CREATOR Like CREATION by Prof. Duro Adegboye 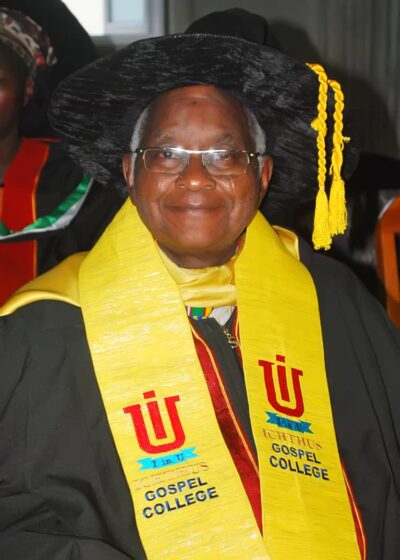 As far as I am concerned, the most significant thing about the Wall of the UNO Highrise (skyscraper) is the Beautiful Ebony Sculpture that the Nigerian Government donated to the UNO at our Independence and on our admission into the UNO.

The Sculpture of the Resurrected CHRIST (UI), The Sculpture of NITEL’s LOGO, The Nigeria Sculpture at the UNO have ONE THING IN COMMON: They are ALL SKINNY in Structure: Big Head and Chest but THIN Body!

The 3 Sculptures are so similar in Structure that You will begin to suspect that perhaps the same Sculptor carved them. If you think and believe so, you are not far from the Truth.

I was told that the 3 Sculptures that I admire so much were conceived and created by the same Person: Professor BEN ENWOWU.

Anyone who knew the Prof when he was a young man would testify that the Prof was big at the top and small as you looked down to his feet. Never mind how he looked as an old Prof. (same with Yours Sincerely).

The POINT is that the SCULPTURES OF PROF BEN ENWOWU LOOKED MUCH LIKE THEIR CREATOR- SCULPTOR!

So, Can the Universe tell me something about THE CREATOR-GOD?

Thus, our Existence manifests 3-in-1ness. We will not be off course, if we predict that the  CREATOR-GOD must be 3-in-1 in nature.

I must confess that I cannot hold brief for all the native 200 Gods and Goddesses of the Yoruba Ethnic Group and the Ones who were imported into Yorubaland from Asia.

However,  a little study of the GOD Who appeared in Human Form to Moses in the Burning Bush at Sinai in 1495BC appears to be TRIUNE in Nature.

As I confessed earlier on, not All GODS are 3-in-1.

The GOD Who (1)Calls Himself YaHWeH in Exodus 6:3 (2)Describes Himself as GOD of Abraham, GOD of Isaac, and GOD of Jacob exhibits SINGULARITY in PLURALITY and PLURALITY in SINGULARITY.

Hear HIM through HIS Scribe Moses:

“And ELOHIM (Hebrew plural for EL) said (Hebrew singular): Let US (plural) make Man in OUR (plural) Image (singular) and in OUR Likeness (singular)”. Nigeria Examination Council, West Africa Examination Council, and Joint Admissions Matriculation Board would have preferred “IN OUR IMAGES AND IN OUR LIKENESSES” but they would allow YAHWEH ELOHIM to get away with IN OUR IMAGE AND IN OUR LIKENESS, because YAHWEH (singular) ELOHIM (plural) exhibits SINGULARITY in PLURALITY and PLURALITY in SINGULARITY.

Anyway, since the Pot cannot question the Potter why the Potter has a flat nose, and the Sculpture cannot fault the structure of the Sculptor, I really don’t care if the CREATOR-GOD is 3-in-1 or 13-in-1.

What fascinates me about YaHWeH ELOHIM are:

Don’t ask me HOW YHWH did it, I can’t explain it. For the past 40years I have been trying to understand and explain how the American Government could raise the equivalent of 9,000,000  Naira through USAID, AFRICA AMERICA INSTITUTE, AFRICAN GRADUATE PROGRAMME, for my Doctoral Programme. I can’t explain it.

Similarly, I can not explain how YAHWEH ELOHIM granted Me Scholarship to Heaven through JESUS CHRIST (1 Peter 1:2), but I’m enjoying it.

Like the Slogan of the Defunct Nigeria Airways: “YOU TOO CAN FLY”, You too can fly to Heaven after death if you will just (1)Repent of your Sins

Why many churches are experiencing decline in membership-Pst Dunmade, writes book on “Church Retention”